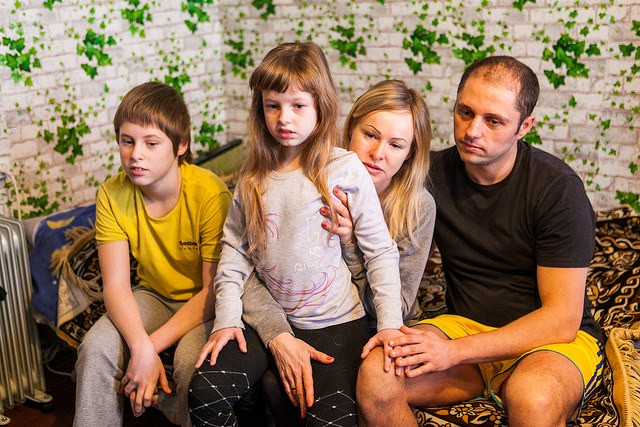 Dear Friends:
This week, we will commemorate our liberation from bondage, our journey from slavery to freedom, from being “strangers in a strange land” to a redeemed people in the land of Israel. But this is a year when security and safety is just out of reach for many Jews around the world --especially in Ukraine.

I visited Dnepropetrovsk last month along with our partners from the JCRC’s Kehillah Project, which has done extraordinary work in Ukraine, as well as the American Jewish Joint Distribution Committee (JDC), which is taking care of the essential needs of the Jewish community and refugees in Dnep.

For the first time since the liberation of the Jews of the former Soviet Union, thousands of Jews in Europe are refugees. More than 2,000 Jews have fled eastern Ukraine to find safe haven. The Jewish Federations of North America estimates that another 5,000 elderly Jews or Jews with disabilities are trapped in war-torn areas.

In Dnep, I met two families, the Gorodetskys and the Kovnir-Sergeevs, whose stories represent the struggle many are facing. Last year, they fled the violence in the southeastern part of Ukraine, along with tens of thousands of others, trying to escape the destruction carried out by pro-Russian thugs in their cities and towns.

Svetlana and Dmitry Gorodetsy have a son and daughter. Svetlana worked as a beautician (though a physician by trade, she couldn’t survive on the low pay) while Dmitry owned a small appliance store. Early last year, the situation in their home town of Mariupol deteriorated. They left what they had in Mariupol and headed for safety to the west, in Dnep. With their meager savings, Svetlana and Dmitry rent a run-down apartment; both are searching for work. For now, they have no income and are entirely reliant on the JDC for emergency assistance.

Elena and Vladimir Kovnir-Sergeev scraped by in the city of Lugansk before the war started. Vladmir, who had suffered an accident and was unable to work, received about $73 a month from state disability payments. Their 25-year-old son, Dmitry, has developmental challenges and receives a state disability allowance of around $60 a month. He nevertheless volunteers to help others with disabilities. When the situation in Lugansk became too dangerous, Elena took both children with her to Dnep. Vladimir had to stay behind in Lugansk to continue receiving medical treatment. Elena returned a month later to get Vladimir, risking her life at each armed checkpoint established by the soldiers of the self-proclaimed Donetsk People’s Republic. Soon after returning to Dnep, Elena suffered a stroke (probably caused by unrelenting stress and strain). The family has no income, only the state payments. They are reliant on our efforts, with the JDC, JFNA and others to make rent payments and to feed their family.

In 1995, the Soviet Union had recently fallen and I was fortunate enough to visit Kiev, the first in my family to visit Ukraine some 90 years after my grandparents left (never to look back). Jewish life in the Soviet Union was utterly repressed; Jews had been spiritually enslaved under Communism. On the last night of Chanukah, I was at a party attended by 5,000 Jews sponsored by Kiev’s Jewish community. The spiritual reawakening – the liberation from communism for post-Soviet Jewry – was just incredible. Over the past 20+ years, spiritual liberation has become the norm in Ukraine’s Jewish communities, due in no small part to the tremendous contributions and hard work of JCRC and Greater Boston volunteers who have helped to revitalize Jewish life there.. Thousands of Ukrainian Jews are connected with Israel and world Jewry; thousands of children attend Jewish schools and thousands of families celebrate Jewish holidays together.

But now in Ukraine thousands of Jews are in physical peril. The Gorodetskys and Kovnir-Sergeevs have found a place where they are safe, where their basic needs are met. They have found hope after months of despair and danger.

And there is comfort in knowing that Ukraine’s Jewish community, which was in disarray only 30 years ago, now has the compassion and expertise to take in thousands of Jewish and non-Jewish refugees, helping them with food, shelter, jobs and education.

But Passover teaches us that physical survival is not enough. Rabbi Joseph B. Soloveitchik, reflecting on the nature of Jewish community, points out the difference between the camp (machaneh) and the congregation (edah). The «camp» is created as a means for self-defense; it is nurtured by fear and offers protection to those inside its boudaries. The congregation is created to help us realize an exalted ethical idea; it is nurtured by love.

Exodus 13:8 tells us to celebrate Pesach by telling our story: “And you shall tell your son on that day, saying, ‘Because of this, the Lord did [this] for me when I went out of Egypt.’” When I was growing up, the story of Jewish suffering in Ukraine was about my grandparents’ generation. Now we are seeing it in our own time. With growing anti-Semitism around the globe, we need to support one another, to make the Jewish values of tzedakah (charity) and chesed (kindness) part of our lives, and to realize the Passover message of redemption and hope.

To be a congregation, in Rabbi Soloveitchik’s words, a community must consist of: “individuals possessing a common past, a common future, common goals and desires, a common aspiration for a world which is wholly good and beautiful, with a common unique and unified destiny.”

I would love to hear from you – how do you think we call can help build a strong and secure “camp and congregation” here at home and abroad? How will your family integrate the ideas of charity and chesed this Passover?