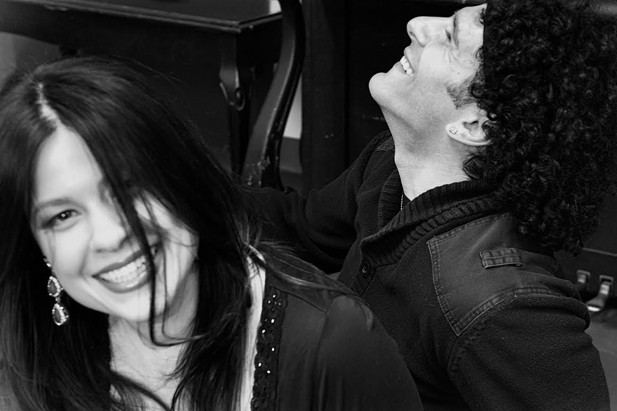 Set to perform at Celebrate Israel: Boston on May 31 are Neshama Carlebach and Josh Nelson, two of the hottest names in Jewish music, as well as a recently declared couple. Both musicians are known for transforming ancient Jewish prayers and texts into soulful live performances and for their close ties to Israel.

The Celebrate Israel: Boston festival is a one day celebration of Israeli arts, culture, music, dance, fun, food and community. The event is the result of an extraordinary year-long community collaboration that united an unprecedented number of local Jewish and Israeli organizations, synagogues and schools.

To keep the crowd on its feet and singing along, event organizers decided to aim for the very top.

As the daughter of legendary musician and teacher Rabbi “Reb” Shlomo Carlebach, Neshama – whose name means soul in Hebrew – honors her father’s legacy by performing his songs and writing new ones. For his part, Josh is at the forefront of engaging Jewish young adults in their heritage. Like the late Reb Shlomo in his own generation, Josh’s Kabbalat Shabbats and other services have set a new standard for immersive, musical worship experiences.

Performing with the duo will be Reverend Milton Vann and the Glory to God singers, a Bronx-based group Neshama has collaborated with for several years. According to Neshama and Josh, Bostonians can expect a mix of old Israeli “pioneer” songs, re-tuned Shlomo Carlebach pieces, and new music written by the artists.

The CJP blog recently spoke with Neshama and Josh about their partnership and what Israel means to them.

What does Israel mean to you personally?

Neshama: I grew up in Israel every summer; we have a home there. My sister and her family live there. She is my only sibling. My father is buried there. For me, Israel is a spiritual home because of my family and my awareness of the holiness there. I feel myself completely transforming, even on the plane before landing. I am a better human being because of Israel.

Josh: I was in my teens when I first visited Israel, and there was a deep sense of connection for me. I’ve gone back several times in recent years. Israel has always held a big place in my heart for my love of Judaism and the Jewish people.

If you were to guide someone who has never been to Israel around the country, where would you take them?

Neshama: Any place you can go to when it’s midnight – there’s something magic about midnight anywhere in Israel. Something really special comes over the land – I have had many awesome epiphany moments both at the Kotel (Jerusalem’s Western Wall) and at my father’s grave [also in Jerusalem].

Josh: I’m into the more subtly fantastic places like Ein Gedi and the Golan, or places like Mea Shearim in Jerusalem [an ultra-Orthodox neighborhood] that are hugely intertwined with our sense of national identity and culture, beyond climbing Masada at sunlight and the tayelet [boardwalk]. I’m interested in stuff that’s a little below the surface.

Are you excited to perform during Celebrate Israel: Boston on May 31?

Josh: Both Neshama and I have really deep connections to Boston. I grew up there and lived there almost half my life. I have attended and performed at this event in the past, many years ago. It’s wonderful to be able to come back and share.

Neshama: I’ve had memorable experiences performing in the Boston area. I performed at the Boston Jewish Music Festival and many synagogues. I’ve absolutely loved singing at Temple Emanuel of Newton. The community is just incredible. Rabbi Michelle Robinson is a close friend.

Please tell us about your musical influences and inspirations.

Neshama: Obviously my father has been my main inspiration. There is the inspiration we also get from you, the audience, as we open our hearts together. Jazz is also important for my spirit.

Can you tell us what it’s been like collaborating with each other?

Neshama: Josh and I come from very different backgrounds, and through music we are trying to bring people together. It seems that every great healer and artist has the dream of bringing healing and goodness to the world. People are able to connect to each other and themselves through our music – that is our dream. Also, Josh and I are partners in life and on stage. It’s an amazing gift to be able to celebrate that part of my life with someone I love, someone who also can’t breathe without the music. We have that in common.

See Neshama and Josh perform at Celebrate Israel Boston on May 31. Click here for ticket information.