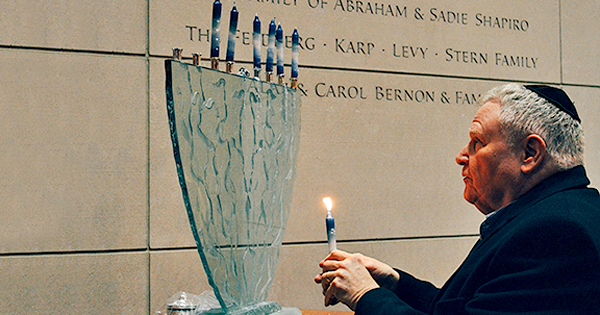 As we celebrate Hanukkah this week, many of us will remember the stories we learned as children: Judah Maccabee leading an unlikely military victory against the powerful Seleucid Empire, the restoration of the Temple, and the miracle of the oil that lasted for eight days. In this time of divisive rhetoric and disunity in our country and in Israel, we must also remember that the story of Chanukah is one of civil war.

The events we remember at Hanukkah took place when Jews were a deeply divided people: the elite in Jerusalem had become integrated into Greek culture, but the people in the countryside held to more traditional beliefs. These two ways of life might have coexisted in peace had King Antiochus and the Hellenized elite not decided to impose their way of life on the countryside by force of law. It was only then that the conflict reached such a point that people with a common history and shared land turned against one another.

Judah Maccabee is most often remembered as a great general, and he was — but his success depended on his ability to unify disparate factions, both within and outside the Jewish people, to fight together against Antiochus. He understood how complex the world is and relied on his considerable diplomatic insight to ensure victory.

This ancient story is still relevant today. Israel continues to face incomprehensible challenges from those that seek to destroy it, challenges that are increasingly gaining support in many parts of the world. Israeli leaders must be prepared to face these threats with strength. But they must also seek the unity of the Israeli people and the support of world Jewry, and they must use diplomacy wisely while understanding how shifts in world opinion affect Israel’s very existence.

Closer to home, the Hanukkah story should remind us that our fight for justice is also a fight for inclusion and mutual understanding. As Americans and as Jews who are deeply committed to justice for all, we must engage with those with whom we disagree. We may be emerging from the contentious 2016 political season, but its disagreements are sure to continue. We must remember that our fellow citizens care just as deeply about our country and the democratic values upon which it was built as we do.

Today, it sometimes seems that the American Jewish community itself is poised on the brink of civil war. We have real disagreements over important issues. To maintain our community’s strength, we must insist on respectful conversations among our fellow Jews. Demonizing those who love Israel but have serious disagreements with its government is dangerous and irresponsible. Similarly, stereotyping those who fear for Israel’s survival as “fundamentalists who stand against peace" defames good people. Both are destructive to our need to remain unified in defense of Israel.

These days, it is all too easy to retreat to our tribal corners and distance ourselves from those with whom we disagree. There are even those in our Jewish community who insist that we ignore world opinion because the world is and always has been against us. But, as Rabbi Jonathan Sacks warns in his beautiful and insightful book Future Tense:

If you define yourself as the people that dwells alone, that will be your fate. You will convince yourself that you have no friends; you are isolated; no one understands you; the world hates you. Your efforts at self-explanation will be half-hearted…. You will have decided that this is the Jewish fate that nothing can change. It was ever thus and always will be. Jews have enemies but we also have friends, and if we worked harder at it we would have more.

It’s worth remembering that the Maccabean revolt did not seek the eradication of Greek culture but simply the restoration of religious freedom.  Once the freedom to practice Judaism was restored, the cultural manifestations of Greek life in Judea continued under Maccabean rule.

Judah Maccabee remained open to Greek culture, and we see this again eight centuries later: the great sage Maimonides used Greek philosophical concepts to better understand our Torah and the world around us. What Judah and Maimonides knew—and we know it, too—is that Judaism at its best is not closed or impervious to outside influences. A constant exchange in which Jews borrow from and give back to the wider world and outside culture enriches us as Jews, as a community, and as the larger culture of which we are a part.

At this time of division and discord, we must remember the values that bind us together so that we do not damage the love and connection that makes us a community. CJP described these values in our recent statement "Committing To Unity And Our Core Values," and they are far more powerful than those forces that tear us apart.

Just over 150 years ago, as civil war was about to erupt in this country, Abraham Lincoln said:

...We are not enemies, but friends. We must not be enemies. Though passion may have strained it must not break our bonds of affection. The mystic chords of memory, stretching from every battlefield and patriot grave to every living heart and hearthstone all over this broad land, will yet swell the chorus of the Union, when again touched, as surely they will be, by the better angels of our nature.

This Chanukah, when we light the menorah, let us hear “the mystic chords of memory” and be united in our responsibility to build a community of understanding. Let us engage with those whose views we do not share, and let us both speak up and listen. Above all, let us open ourselves to “the better angels of our nature" and stand against sinat chinum, the causeless hatred that has always foreshadowed violence and destruction.

Wishing you all a Hanukkah filled with understanding, optimism, and love.