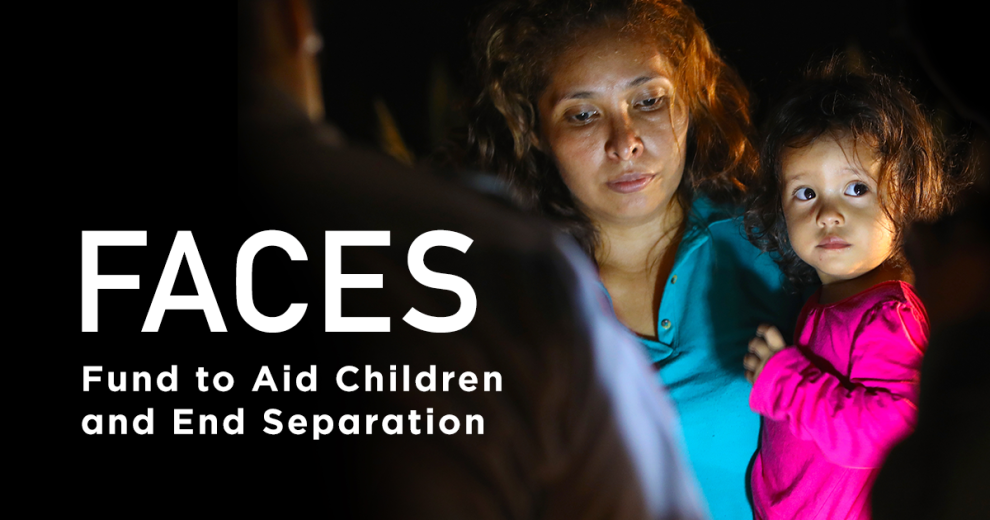 In response to forced family separations at the U.S./Mexico border and the ensuing urgent humanitarian crisis, CJP has launched FACES, the Fund to Aid Children and End Separation. To learn more about CJP’s position on the family separation policy, read our joint statement with United Way, Catholic Charities, and The Boston Foundation. Please consider making a donation of any amount to help people in urgent need get the legal and material support they need today.

Every morning when I say my morning prayers, I put on tefillin, an ancient practice that is traditional for many Jews and makes me feel closer to God.

It is, in its way, a marriage vow, a symbol of the love between God and the Jewish people that reflects the covenant between God and humankind. When we say these words, we are metaphorically marrying ourselves to God. The terms of that marriage, that covenant, are put forth by God. We are bound together faithfully and forever, in righteousness, and in justice, and in lovingkindness, and in compassion. It is a constant reminder that justice devoid of these things can be cruel — and that it can be (and has been) used to justify every kind of horror from slavery to genocide.

The “zero tolerance” policies encouraged by the current administration that separate children from their parents and that dehumanize and demonize strangers, immigrants, and refugees are manifestly devoid of compassion. Attorney General Jeff Sessions recently justified them by quoting Christian sources that call people to obey the laws of the land. Indeed, there are similar Jewish sources.

Many spiritual leaders across faiths and denominations have pointed out that Sessions’ use of the Bible badly distorts our religious traditions. Worse, it desecrates the name of God and the meaning of God’s Torah.

As I see the images and hear the cries of children taken from their parents’ arms at the U.S./Mexico border, I am challenged to uphold the vows I take when I don the tefillin. Compassion is a key component of what it means to be a Jew.

In our country, before our eyes, children were taken from their mothers and fathers and shipped sometimes more than a thousand miles away to New York City, locations in Michigan, and beyond. Parents have been incarcerated in detention centers that our partners say are far more like prisons, all for the “crime” of seeking asylum in the very same country where my grandparents found a new life; where Soviet Jews found refuge and a bright future; where the victims of wars, famine, and oppression have come since our country’s founding.

Yet now, in 2018, we are oppressing the strangers in ways we never would have dreamed of; “welcoming” them with detention centers, cages, forcible separation of families, and indeterminate prison sentences for the crime of trying to find a better life. More significantly, our leaders’ rhetoric dehumanizes and demonizes them, opening the door to increasingly horrible outcomes.

The Torah exhorts us thirty-six times to remember the stranger. As Rabbi Jonathan Sacks writes:

“Why should you not hate the stranger, asks the Torah? Because you once stood where he stands now. You know the heart of the stranger because you were once a stranger in the land of Egypt. If you are human, so is he. If he is less than human, so are you… I made you into the world’s archetypal strangers so that you would fight for the rights of strangers — for your own and those of others, wherever they are, whoever they are, whatever the color of their skin or the nature of their culture, because though they are not in your image — says God — they are nonetheless in Mine. There is only one reply strong enough to answer the question: Why should I not hate the stranger? Because the stranger is me.”

At this moment, the stranger is separated from her children, locked in a detention center, not knowing her fate. The stranger is crying for his father in a windowless tent, caged like an animal, lying on a thin green pad and covering himself with a foil blanket for warmth. The stranger is trying to find out how to escape danger where she came from and figure out why she – and her child – is being treated as a criminal in the land she risked everything to come to.

And now, the stranger is trying to pull together the disparate threads of a family scattered across a huge country with little or no familiarity with the language or the legal system and with no idea what the future holds.

As Jews, compassion, righteousness, and justice aren’t optional benefits. They are nothing less than the mission statement for the Jewish people. I believe welcoming strangers is the most ancient and fundamental law of our people alongside the pursuit of justice. Lest we forget, Sodom was the richest city in the world, but its people hated, brutalized, and expelled strangers. The residents of the city perished because of their greed; Lot was saved because he protected strangers even at the risk of his own life.

When the stranger needs us, we must be there.

CJP’s new fund responds to the urgent needs of the stranger. The CJP Fund to Aid Children and End Separation (FACES) will donate money to three organizations — Catholic Charities, the Young Center, and the Interfaith Welcome Coalition — to provide legal aid, foster home placements, social workers specializing in child trauma, and basic necessities to the children and families caught up in our government’s “zero tolerance” policy.

CJP’s FACES will make sure we can tell our children that we stood up for our values and did what was right. We will help immigrant families find each other and begin to heal after the trauma of separation. We will provide them with the basic necessities and legal assistance they urgently need. And, perhaps most importantly, we will let them know that we remember being strangers, too, and that they are not alone.

Mr Shrage has written a passionate letter about the separation of children. I do not think seperation of children is wise or kind at the border.. Our deal making president clearly is sending his style of message to first congress to send im a bill and second to families south of the border that there are ramifications to entering illegally . Id prefer to see both Mr Trump and Mr Shrage create legislation . It seems like all sides of immigration want to focus on metaphors rather than policy. I&#039;d hope part of the money directed to the three subcharities could go to a fourth charity started by Mr Shrage that could produce a document of real legislation proposal to vote on of our comprehensive new policy, and that he would include it in his blog. Its all in the details.

Thank you for writing this- it&#039;s wonderful and desperately needed.