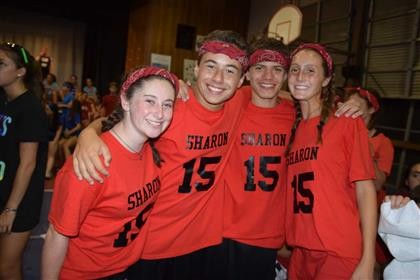 Like many parents considering an overnight camp for their child, my husband and I took a tour of Camp Tevya in Brookline, NH. It was a warm day, and we had our son, Garrett, in tow. Unlike the rest of the families touring, we already knew our way around and were familiar with the camp’s welcoming atmosphere, rustic bunks, and sparkling lake. Our daughter, Amanda, was already a camper there enjoying her second summer of sports, crafts, and building friendships.

Garrett couldn’t wait to go. We, however, had other concerns.

Garrett was diagnosed with Type 1 diabetes when he was 3 ½ years old. The little guy went from getting vaccination shots once a year to needing two insulin shots every day to keep his blood sugar in a healthy range. We sometimes had to chase him around the house as he yelled, “No shot, no shot.” It was heartbreaking, but he made the adjustments and learned to live with this new reality.

Jim and I loved the idea of Garrett joining Amanda at Camp Tevya, and he wanted to go. He had enjoyed attending Camp Joslin in Carlton, MA, an overnight camp for boys with diabetes that has many doctors and nurses on staff, but we wanted him to have the opportunity to celebrate Shabbats and to deepen his Jewish identity at a Jewish camp.

Garrett, however, was only 10, and Camp Tevya had never had camper so young with diabetes. We were nervous about the staff’s ability to oversee a child with this condition. We knew all too well the challenges of keeping his blood sugar in range, especially avoiding dangerous lows that can come with increased activity.

But the camp director reassured us, and Ellen, the head of the boys’ area, convinced us. “We want Garrett here, and we will do everything to keep him safe,” she said. “He should be here with us, and with Amanda.”

And they did keep him safe. The caring camp nurses, leaders, counselors, and a very special senior staffer, Ben, who had EMT training, all looked out for Garrett. So too did his fellow campers: they joined him on walks to the health center, picked up his string bag with his glucometer and glucose tablets when he left it around camp, and they never made him feel different or uncomfortable. On the basketball court, in the dining hall, or in the bunks, Garrett was always just one of the guys. When we picked him up, he was happy, healthy, and counting the days until his return the next summer.

Garrett is now 16, and Camp Tevya has been and continues to be a huge part of his life. Last summer, Garrett earned his certification as a lifeguard, and he was also selected as a color war captain. He was a spirited leader for the Sharon/Red team, and he relished his “senior” Tel Chai summer.

Right now, he’s accompanying his camp friends on a five-week trip to Israel. They’ll climb Masada, visit the Western Wall, and swim in the Dead Sea before returning to camp in early August to cap off another magical summer. Diabetes will always be a part of Garrett’s life, but thanks to the devoted and caring community he found at Jewish overnight camp, it never kept him from acquiring strong values, building life-long friendships, and fully celebrating what it means to be Jewish.