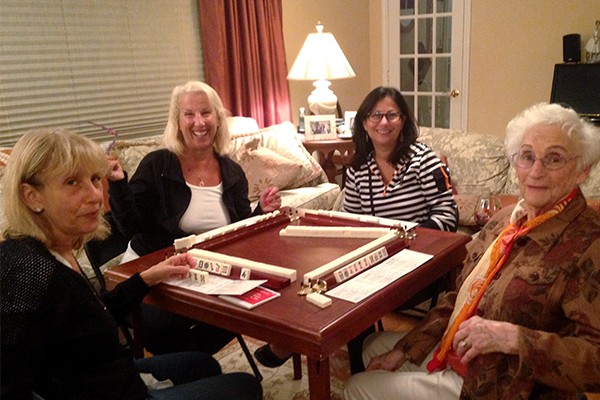 …So Much More Than a Game
It is tactile at a time when our fingertips grace only digital surfaces
It is cacophonous, waking up the senses of not only touch but sound
It is retro, a throwback to a simpler time
It pushes us to think, to plan, to dream
It is the music to accompany our hands as they dance across the tiles
It forges relationships and alliances, competition and cooperation
It is rich wine and richer conversation
It is an indelible strand that binds women of every generation to the one before it
It is Mah Jongg…and it is so much more than a game!

Mah Jongg – a Chinese tile game of skill, strategy and calculation similar to rummy – has unexpectedly become a steadfast and enduring pastime for American Jewish women. It could be because it represents so many things, each unique and personal to the growing number of women who play, but for me, it’s one of the ways I define my Jewishness. My family didn’t take an especially religious approach to raising me – it wasn’t until I was a teenager that joining a synagogue became important to my parents – but my mother’s weekly Mah Jongg ritual, along with the electric menorah in our window, provided enough evidence that I was a Jew.

For the last five years, some dear friends and I have gathered in one home or another for what has become a new tradition for us – Mah Jongg night. We began shakily at first, armed with a few instructional pamphlets, our shiny, unblemished Mah Jongg cards and the determination to master this game, which other friends seemed to embrace with such aplomb. What is it that makes the game so compelling?

We are still relative newbies; the Keystone Cops of the Mah Jongg set. We make lots of mistakes, and pretty much ignore any rule that interferes with our enjoyment. Our preferred Mah Jongg set came with extra jokers and flowers (on the tiles, that is) and we play with every single one!

We ignore the rules about closed hands; we use all those jokers, which would make true Mah Jongg mavens turn over in their graves; and we haven’t quite mustered the courage to gamble (the thrill of the win is reward enough for us). But what we don’t do is more than compensated by how much enjoyment we get from muddling our way through, sharing stories of our children, complaining about the little indignities of life, and laughing. (Of course, the laughter is directly proportional to the wine, but that’s neither here nor there.) While still challenged, over time we have grown in confidence and speed, to the point where we can call ourselves Mah Jongg players without looking to see if anyone’s snickering.

I wouldn’t say Mah Jongg is a pop culture icon, but it certainly has a foothold among women of a certain age and background, and signs of its popularly abound. There have been video versions of the game for years, and there are countless websites hawking wares that every dedicated player must have – everything from Mah Jongg socks to decorative nail decals. There’s even a Mah Jongg site claiming to be the definitive source for all things Mahj. One of their most interesting tidbits? Proceeds from the sale of the Mah Jongg League’s Official Rule Cards have gone directly to over 25 charitable organizations across the country, from the Alzheimer’s Association to the United Way. Who knew that playing would be such a mitzvah?

At our game night, if we’re lucky, we’re playing with a set inherited from our mothers or grandmothers, complete with ever-yellowing ivory or bake-a-lite tiles and a fraying leather case, redolent of the generations of loving hands that touched its surface. Not a game passes that I don’t think of my mother and feel her presence. As I sit across from my friends, transfixed by the click and clack of the tiles, I’m transported to a far less complicated time, when similar sounds would travel upstairs to me in my bed, evoking a mélange of feelings: comfort, connection, joy, safety.

My mother has been gone for a year now, and since losing her, my connection to this game feels even more ardent and purposeful. She is in my head as I pour over my tiles in search of a hand, and on my shoulder as I agonize over which tiles to throw. But it’s not just about connections lost. One of my Mah Jongg partner’s mother, Eleanor, is 96 and still plays three times a week. Not a game goes by that we don’t invoke her. “Don’t tell Eleanor you’re making that move.” “What would Eleanor think?” “Did you study the new card like Eleanor suggested?” There have been times when we called Eleanor in the middle of a game to check on a rule. When she visited recently, she rotated into a game (and of course won). She is our living and breathing embodiment of the generations connected through Mah Jongg.

There are so many women who play more frequently than I do, who complete many more games in the span of a few hours, and whose Mah Jongg table I would be intimidated to copy. But like varying degrees of religiousness, I’m comfortable with the version of Mah Jongg that I’ve embraced, and with the role it plays in my life. It connects me to the generations of women in my family and my faith; it provides a similar cultural context for me as, say, bagels and Hava Magila; and it offers excellent mental stimulation to carry me successful into my next stage of life. (And as we know from Eleanor, you can play Mahj at any age!)

I hope to teach my own daughters the game so that they can carry on this legacy, in their own way, in their own time. And, in the tradition of our foremothers, I will pass my set down to them and watch proudly over their shoulders, even if only in spirit, as the click of the tiles lulls their own children to sleep. Bam, crack, dot, dragon… this is a vocabulary I coveted as a child, and now claim as my own – as a card-carrying member of the women who “play!”

I very much enjoyed your article about mah jongg. I am a relatively new player, going into my third year. I, too, love the camaraderie, the challenge, the sisterhood, and the relaxation. One thing I want to touch upon that wasn&#039;t mentioned in the article: more and more non-Jewish people are playing mah jongg, and more and more men are playing. In my current group of regulars, there are three Jewish ladies (including my soon to be 88 year old mom!), and a Christian lady. My mom plays in another regular weekly game that has three non Jewish players. I know of a non Jewish couple who learned mah jongg on a cruise ship. They now regularly play mah jongg with another non Jewish couple. That&#039;s right, two men and two women. So while a huge percentage of mah jongg players are Jewish, it is becoming more and more common within the general population. Thanks again, for writing and sharing such an interesting article on one of my favorite games!