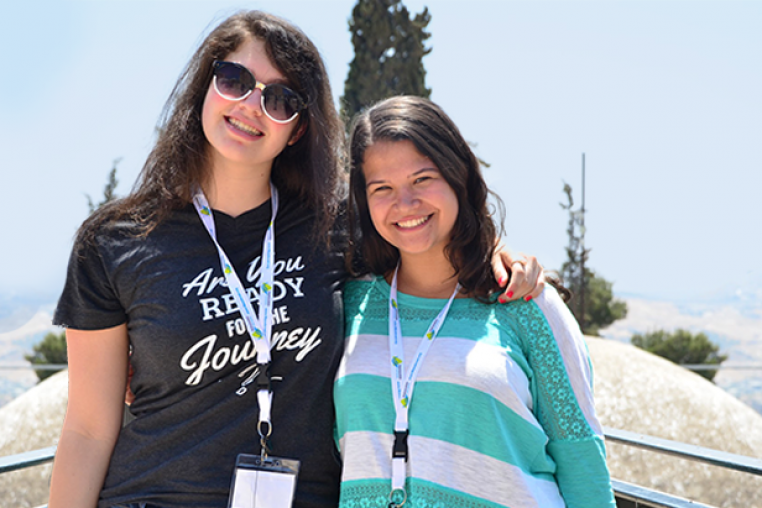 The Shinshinim Young Ambassadors Program brings recent high school graduates from Israel to numerous communities abroad to nurture close relationships. This year, Boston is hosting its first Shinshinim Ambassadors, Yael and Sapir. During their year of service, the Shinshinim live with local families, volunteer in synagogues and act as emissaries. At the end of their year abroad, they will return to Israel to begin their military service, bringing a deeper understanding of our community with them.

Read on to get to know Yael and Sapir – and be sure to follow them on Facebook!

How did you hear about the Shinshinim program and why did you want to be a part of it?

Yael: I heard about this program because a lot of people from my school were doing it in different cities around the world. I’m here for a bunch of reasons, but the main reason is because last year I was in a delegation to the German embassy, which included teenagers from all around the world that speak German. While there, we went to a bar to see a game of the World Cup. At half time there was a pause, and we saw Benjamin Netanyahu speaking about the Protective Edge operation. And then, because I was the only Israeli person there, they all looked at me and wanted answers. So, I was the person to talk about Israel, and what is all the conflict about, and what is happening, and if I’m going to serve in the army, if I want to serve in the army. And I really liked the feeling of being this person for others, giving them the opportunity to meet a person that is living this situation and not just to hear it from the media.

Sapir: From my high school, about three years ago, I went to a delegation in Charlotte, North Carolina. And for me it was a really good experience, the best time I’ve ever had, because I met so many people, and I felt that every word I was speaking and everything I was doing had a lot of value because I am from Israel, and I’m the first person they’ve met from Israel. And when I was in Israel with the American group, we went to the Western Wall, and first I was like fine, the Western Wall, I’ve seen it many times. But then Izzy, my host sister from Charlotte, started to cry and be emotional about it. I feel like after I came back from the delegation, it’s something bigger, it’s something I believe in. And I was very excited when I discovered there was an option to do this program.

What are you doing day-to-day? How is the program working so far?

Yael: Each one of us has two different congregations that we are working with, and we’re working together in day schools on Fridays. Our mornings are basically meetings with all the educational teams, and preparing what we’re going to do during the afternoon, or next week, or for events. And then we’re working in the congregations, speaking about Israel. 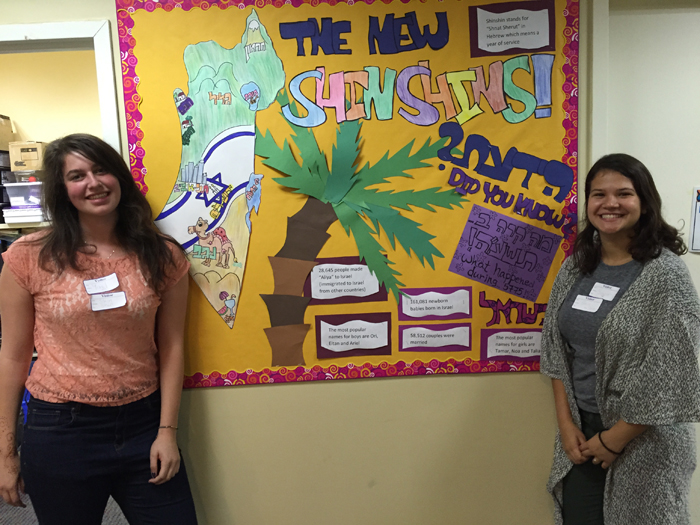 Sapir: It’s the first year that the Boston-Haifa Connection has Shinshinim, so everything we build is new, and we have to be flexible. As Yael said, we have two temples, and we change our day school every three months. Ruth, our supervisor, showed us the options that we have—tons of other temples want us to come, so do public schools, and there are events—tons of options. In one day, I can tell you that I can dance with a grandma, or paint with five year olds, or talk about shawarma (falafel) with teenagers, and decide what activity I want to do next week with my site supervisor.

In your free time, what are you excited to do in Boston?

Sapir: We also had so many different experiences. We went to Faneuil Hall, a Red Sox game—they won and David Ortiz hit a home run!

Have you had any culture shock? What are some of the differences between life in Boston and life in Israel?

Sapir: For example, there are always options. There are options in Israel—Israel is not just camels and deserts!—but here we went to a restaurant, and I wanted to get an omelet. And they asked me, “Do you want to have bread with that, and which bread?” And I was like, “Which bread do you have, which kinds?” And she told me this long list, and I was like, “Okay, I’ll be good with a bagel.” And then she asked me, “So which bagel do you want?” And I was like, “Sesame.” And then I was afraid she would ask me which sesame! So, this is probably one of the differences. And also, it’s so cold and it’s only October!

Yael: Three weeks ago, I was talking with my host sister Lucy about colleges—what she wants to learn, where she wants to go. She is 13 years old. And then, I was doing my math, and I realized that when I will start college, she will start college. And I’m 18! It was shocking, but this is one of the cultural differences. In Israel, you know that you will go to the army—it’s not a question. Lucy was shocked at the beginning because it’s a big difference, but then she was curious about what it would be like to start college when you’re older.

Sapir: I feel like we’re already more mature. We already know the world better. We already feel the connection, which is so important to feel, with our brothers in the USA. I feel like I will be more mature, I will be more responsible for myself. It’s a big thing to not live with your family in your place in Israel. I’ve learned things like, oh, I need to do laundry? Now I know it!

Seriously, I would say I want to be a better person than I am at the end of the year. But I’m focused on the things that I want to achieve with the community.

Yael: At first, I didn’t want to do a gap year, either in Israel or abroad, because it might be a waste of time, because you need to go to the army and to get a job. And then someone told me that it will be one year to postpone the rest of your life, so how bad could it be? And when I thought about it like that, I found this program and I started to be very psyched about it because it’s different. It’s to be very independent—it’s to talk with people that never saw you before. It’s an open page, and it’s nice to experience this, to speak just in English, not speaking in Hebrew. Working for Israel and changing the face of Israel is very important for me.

Sapir: I want to just add something, because when people ask me why I’m doing a gap year, they sometimes think, “Oh, it’s just a waste of time,” like Yael was saying. So, I told them, when I will be thirty or even forty, I won’t think about the year that I started to work. When I’m thirty I will probably have a job and a family, I will do all the stuff that you do, but I will have had an unforgettable, amazing year where I have experienced so many things and I will change. This year is really worth a lot.

When you go back to Israel after this year, what will you do? How might this experience shape your life?

Yael: We are going to the army. There is a unit in the Israeli army that focuses on international connections between the IDF and other armies around the world and governments. This is something that I might be interested in, after this year. I would also like to go to intelligence if possible. So this Shinshinim program can lead to a different thing in your life that you didn’t expect it to.

Sapir: One of the main people in charge of this program told us that the Jewish Agency, which sent us here to be Israeli ambassadors in the Jewish communities, wants us back as better citizens. So we need to remember that when we go back to Israel, we were ambassadors and now we need to put all our power back in our communities in Israel.

When we postponed our service to come here, we made a big decision—when you postpone, the job that you want may not be there later. I want to be in the army, maybe go to a combat unit—there is a place in the unit to talk with the soldiers about responsibility and education. My job would be to travel with them and remind them about the reason they are a combat unit for Israel. It’s actually very similar to what I am doing this year.

Is there anything else you want to tell our readers?

Yael: We’re so excited to be here, and I want to say thank you to CJP, Boston-Haifa, and all of the people in Boston who are so welcoming.

Sapir: We can’t wait to meet all of you!