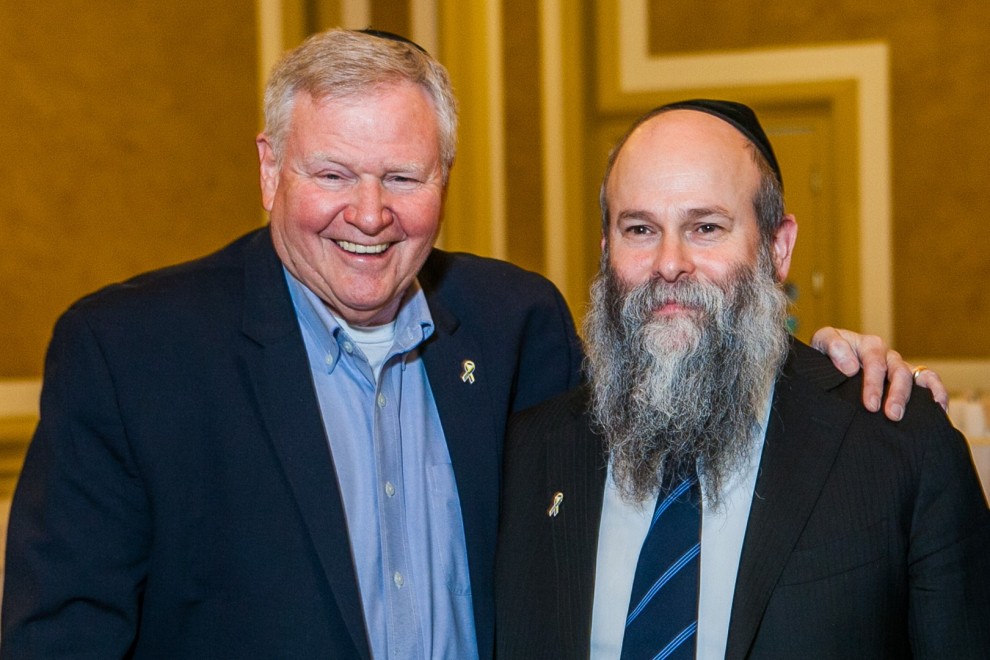 We’re excited to start #MenschesWeLove, a new feature on The Tribe! In this series, we’ll highlight members of the Jewish community who are doing amazing work in partnership with CJP and making an impact. We’re kicking things off with an interview with Rabbi Shmuel Kaminezki of The Dnepropetrovsk-Kehillah Project (DKP).

The Dnepropetrovsk-Kehillah Project (DKP) began in 1992 as a partnership between CJP, JCRC and the Jewish community of Dnepropetrovsk, Ukraine. During 2014 - 2015, the management of the DKP transitioned fully to CJP. Under the leadership of Rabbi Shmuel Kaminezki, our partners in Dnep are revitalizing Jewish life, building a communal infrastructure and working to create a bright future. We asked Rabbi Kaminezki more about his work and life in the city.

When did you arrive in Dnep, and what led you there?
I came here with my wife Hannah in 1990 because The Lubavitcher Rebbe, Rabbi Menachem Mendel Schneerson, who was then alive, sent me here. This is his home town, where his father was the chief rabbi for 30 years until he was arrested in 1939 by the communist KGB. From 1939 to 1990, there was no Rabbi—there was some official communist appointed Rabbi, but no real Jewish life. They shut down 47 synagogues, they controlled everything, but in every major city the communists left a token religious community and one small synagogue.
There was a religious community that continually functioned in Dnepropetrovsk even during the Soviet hardships. In 1990, they wrote a letter to The Rebbe and requested, that as the Soviet Union was falling apart, they would like to invite him to come and take his father’s old position. I had the honor and privilege to be chosen by The Rebbe for this position.

How did you get involved with the DKP?
The National Conference for Post-Soviet Jewry matched Dnepropetrovsk to Boston in 1992 and it was a match made in heaven, love at first sight!

Here in Dnep, all services that the government is supposed to provide to the people fell upon us. The Jewish inhabitants relied on us for all their needs. Pensions, medical needs, fixing their apartments, providing psychological support, protecting them from attacks by anti-Semites and helping them deal with their fears brought on by their very difficult history of communism and anti-Semitism.

We couldn’t do it ourselves, and this is where Boston came into the picture. When it comes to really taking care of 50,000 Jews and all their needs, we had no experience, we had no money and we felt overwhelmed and lost. Boston, through CJP and JCRC, came in and affected every aspect of the community here—organizing the finances, organizing education and organizing the infrastructure of the community.

What have some of the biggest DKP projects been?
There was an emergency situation that needed special attention: medical services and support for everyone in the community. I’ll give you just one example, and it’s unbelievable: there was a six dollar test, the Pap smear to detect cancer in women, and they had no idea about here. So Boston came in, educated the women, brought the tests and took doctors to the U.S. to learn how to effectively use the tests and provide accurate diagnostics. Thousands of lives were saved because of this.

After this success the project grew and started providing more medical services for children, babies, infants and prenatal. You always think you’re helping somebody else, but you really end up helping yourself. My wife had our eighth child in Ukraine, and everything that could go wrong went wrong. When she had babies in the U.S., in Israel, everything went smoothly. The equipment and the knowledge of the doctors in Dnep, provided by Boston, saved my son Josef, who is now eight years old.

How has the recent political unrest and conflict affected the DKP and Dnep’s residents?
The frontlines are not far from here, and it is very scary. A year ago everybody was panicking, scared that the tanks were coming, and the shelling would begin and the city would be taken over by terrorists. Thank God that didn’t happen—now there is less panic and people are not as scared anymore.

What’s another challenge the relationship with Boston has helped to overcome?
In America, every person goes once a year for a check up to the doctor. In Ukraine, you don’t have such a thing. So we established, together with Boston, a clinic called The Jewish Medical Center (JMC). We received equipment and training from Boston as well as advice on the management of the center. Our doctors went to Boston for training and doctors from Boston came to visit the center.

We are now moving the JMC to the center of town to make it more accessible. It will serve 10,000 elderly people who would otherwise never see a doctor. So this our goal now: to make sure they all receive checkups once or twice a year, and then, if needed they will be sent to a specialist. We have agreements with hospitals in the city who will accept out patients.

How many synagogues are in Dnep now, and how has the revitalization of the faith taken place?
As the city had 100,000 Jews and most of them were religious people, there used to be that every little corner had a synagogue. Now, we are talking about a very assimilated community and not too many people are religious. The way it’s organized now, there are two sides of the city: the left bank and the right bank of the river. There is a synagogue on each side. One is at the old age home established together with Boston. On the right side of the river, there is a big main synagogue, and then there are shtiblach—people get together for minyanim, there is Moshe house, Hillel. They’re not official synagogues, but there is a lot going on here.

For every Jew that leaves Dnep, we have a Jew that comes forward to embrace their Jewish identity. There are so many Jews here who previously didn’t recognize themselves as Jews or didn’t know they were Jewish because of 70 years of communism. The reason why Jews have started to come forward is because we have a very vibrant community, a good education system, and because of the services and support that we provide. We see a common scenario when an old Bubbe on her death bed calls her family and says, “I’m going to die but I want you to know who we are—we’re really Jewish.” It’s very common. But the problem is that these people have a problem proving it with documentation. In order to help them we opened up an office that helps people prove that they are Jewish. We help them to access the archives and with birth certificates. And if they want to go to Israel or if they want to be a part of any programs, we want to help them find the proper documentation.

In the last three months alone, we’ve helped 270 people to identify that they are Jewish. Now, for those 270 people that we helped, all have an average of five dependents: a spouse, children, grandchildren, so there are so many who are becoming Jewish.

What’s one of the greatest joys that you get from working on the DKP?
When a person comes to you and he is worried and he needs help, and he leaves you with a smile and feeling that somebody cares about him, this is the best feeling. And knowing that we have such devoted partners in Boston always helps us work better.

I arrived here as a 25-year-old rabbi with no experience. I knew how to put on tallit, how to do the prayers, but I soon realized that there is a much bigger responsibility here. So the feeling that we have such a strong, experienced community with people who really care, is a very good feeling. We really have good people who care about Dnepropetrovsk, and when people come here they see how much we appreciate it. Please come and meet the people and see what we do. I don't think there is anything like the DKP anywhere in the world.

Why should Dnep be important to Jews in Boston?
Jewish people are like a family—we care about each other. The Jewish community in Ukraine in general, and in our region especially, would not be able to survive without the support of Boston. It’s many different kinds of support—the medical support, the ideas of how to run a community, and the educational visits that we have, to mention just a few of the many ways Boston has made a positive impact in our community.

When God provides you with a good life and you have the good fortune to be living in Boston and you hear about your people, Jewish people, that are in very great need, you always want to do something about it. This is what being Jewish is all about. We care for each other, and we are blessed to have such good friends in Boston.