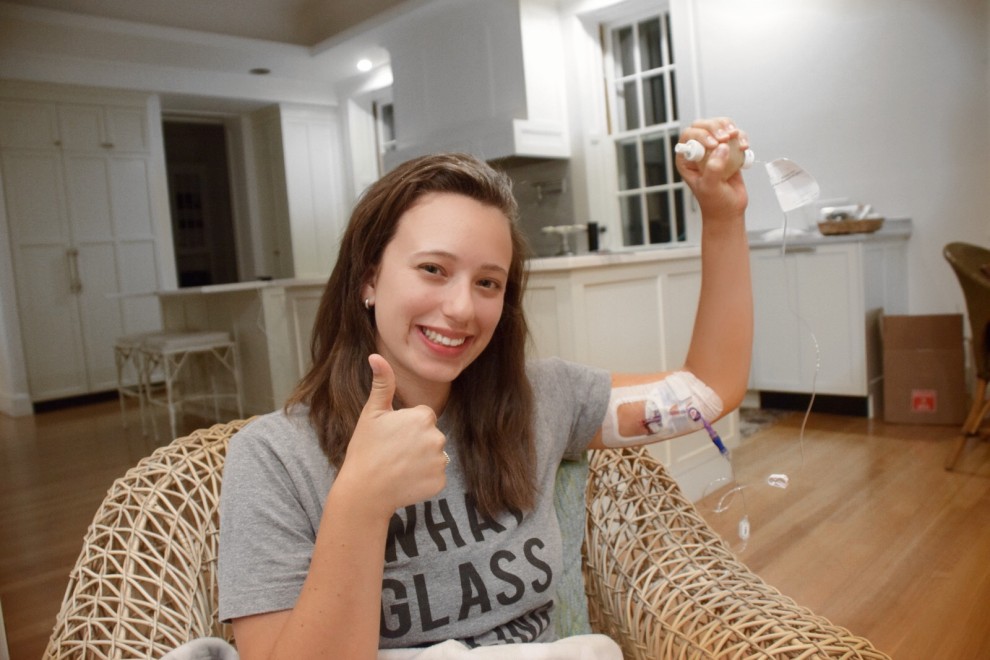 My Jewish journey did not truly begin until after I graduated from high school and I traveled on a Birthright Israel trip organized by Camp Young Judaea.

Growing up in an interfaith family in Rhode Island, I did not know many Jews outside of my immediate family. But like so many other young adults who have made the pilgrimage to Israel, I felt an immediate connection to my Jewish faith and heritage.

Right away, I knew that these were my people and being a part of the Jewish community would be a strong part of my identity.

After my summer in Israel, I arrived for my freshmen year at Babson College, where I had received a scholarship for Women’s Entrepreneurial Leadership. Yearning to stay connected to Israel, I immediately joined Hillel and I would go on to become the youngest board member in our chapter.

After attending CJP and IACT events, I learned about Onward Israel, which is supported by The Lavine Family Leadership and Service Learning Fund.

While my collegiate and spiritual life was barreling full steam down one path, my health had other plans for me.

After my freshmen year at Babson, I was diagnosed with Chronic Neurological Lyme Disease and co-infections. I was told that I would need a PICC line for long term IV treatment. This meant that I would have to do IV treatments 1-3 times a day, both in class, Hillel meetings, and even at Shabbat dinners, and would have to have a home care nurse vis it me weekly in my dorm room to change my bandage.

All the while, I walked around campus with a cut sock on my arm to protect my medical device. Needless to say, for a young and fashionable coed on campus, this was not ideal.

Despite my medical setbacks, I had my heart set on returning to Israel. Fortunately, I was accepted into an internship program in Haifa with Onward Israel, where I’d return to Israel to work at a high tech startup.

I knew in my heart that this was something that I had to do.

With an extra suitcase full of my medication in tow, I headed back to Israel to fulfill my dreams and to be surrounded by people and a country that I felt a unique bond with.

Turmoil in the Holy Land

A few weeks into my internship, three Israeli boys were kidnapped. This horrible event suddenly changed everything. Colleagues at my internship were being deployed with the IDF, and suddenly the threat of war was all around me. I watched in awe as Israelis continued to go to work and encourage those around them, despite the tense political climate.

One weekend I went surfing with my colleague Barak and his friend, Gilad. The next weekend, Gilad had been called into Gaza and his tank had been hit by terrorists. He lost his hearing in one ear and he was temporarily blinded.

Throughout the chaos, I drew inspiration from my friends and colleagues who continued to move forward with their lives and goals.

I got on one of the last flights out of Ben Gurion before it was closed due to rockets being aimed at the airport. Still inspired by my experience in Israel, I joined an accelerator program that fosters startup business ideas when I returned to Babson for my junior year.

The director of the program — a strong Jewish woman — encouraged me to pursue my own business after returning from Israel and hearing my story.

I created a prototype for a fashionable PICC line sleeve that would allow me to do my treatment without having to take the sleeve off.

Before going to Israel, I didn’t talk much about my illness because I didn’t want to be perceived as weak. But when I returned, I was inspired to share my story of turning sickness into strength.

Today, I have turned my health setback into a venture-backed growing startup called Mighty Well.  We use the fabrics and innovations that have been developed for the athletic industry and apply them to healthcare needs, such as my own.

I am also a public speaker to young adults learning about entrepreneurship and health care professionals looking to better understand the patient perspective. We are excited to launch an equity crowdfunding campaign through the Republic platform in the upcoming month to close our seed round.

As someone as been told “no” many times in my young life thus far, I am thankful that some of my biggest cheerleaders and points of inspiration are member of my local and global Jewish community.

Go, Emily! You're such an inspiration. Thanks for sharing your story. Israel

Wow, that is amazing! Congratulations on turning adversity into growth and healing for both you and others!