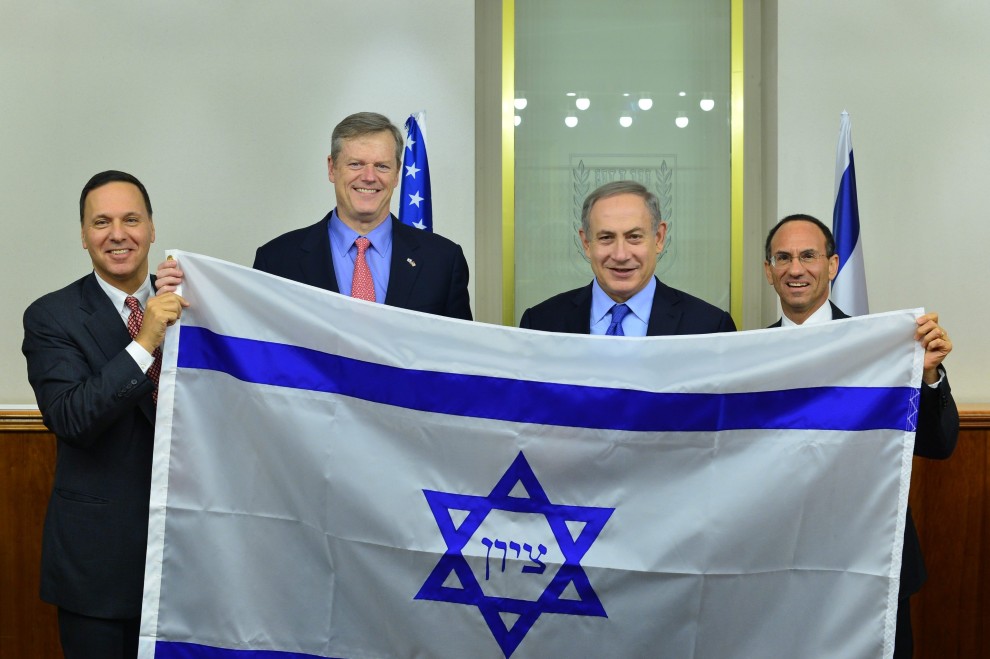 Governor Charlie Baker and a high-level delegation of more than 60 leaders in business, technology, education, and health care visited Israel earlier this month, and I was honored to be a part of the mission.

This was Governor Baker’s first international trade mission, and it’s certainly no surprise that Israel was his first destination.

Massachusetts’ leaders have visited Israel before. There have been a half-dozen economic development missions to Israel since Governor William Weld visited the country in 1992. Governor Deval Patrick went twice during his two terms in office. CJP has been there along the way, helping pull together the right groups of people from Greater Boston and in Israel to create synergy and economic opportunity here at home and in Israel.

This just-completed mission developed as a partnership between Governor Baker, his staff and economic development team, and the New England Israel Business Council (NEIBC) with the energetic volunteer leadership of David Goodtree.  CJP was a sponsor, so it was my privilege to travel with them as I have on a half dozen economic development missions sponsored in part by CJP since Governor Weld’s mission 24 years ago.

The outsized benefits of this partnership to our Commonwealth and its people have become increasingly clear over the last nine years.  As the latest (2016) "Massachusetts-Israel Economic Impact Study" showed, Israeli-founded businesses in the Commonwealth reported more than $9 billion in revenue in 2015, generated over $18 billion in economic benefit, and employed 9,000 people directly while supporting 27,000 additional jobs based on demands for goods and services. These businesses represented nearly four percent of the Commonwealth’s GDP in 2015, and they grew twice as fast as the Commonwealth’s economy.

Looking at the incredible economic engine Israeli-founded companies represent, this mission had a slightly different goal than those in the past: rather than simply showcase Israel’s innovation and technological expertise to a high-level group of political and business leaders, those Massachusetts leaders would essentially showcase why Israeli entrepreneurs should locate their U.S. offices in the Commonwealth. Along the way, we would recognize the connections between us.

A Common Spiritual and Political Heritage of Freedom

There are so many connections between Israel and Massachusetts, some obvious, some less so. We’re both technology powerhouses. We both have world-class universities and brilliant students. And a direct flight connecting Logan Airport to Ben Gurion in Tel Aviv makes those connections so much more convenient.

Yet, it’s more than economics. Governor Baker also stressed the common political and spiritual roots of Israel and our Commonwealth wherever he went, referencing the Pilgrims and their desire for freedom.

The American narrative – our story about ourselves as Americans – was in many ways built on the biblical story in Exodus. It proved to be irresistible and transformational for many groups of Americans at many times in our history.

The Puritan Pilgrims saw themselves as fleeing from Egypt (England) and crossing the Red Sea (the Atlantic). They saw America as the New Jerusalem and even contemplated creating a Hebrew-speaking colony.  Not surprisingly, New England is dotted with Goshens and New Canaans and Salems.

Those who began the American Revolution – who also saw England as Egypt and King George as Pharaoh – viewed themselves in the place of Moses. They truly believed that America was the Promised Land in which they would “proclaim liberty” and live in freedom. When Thomas Jefferson, Ben Franklin, and John Adams developed a possible “Great Seal” for the United States of America in 1776, it showed the Jews crossing the Red Sea pursued by the Egyptians, and around it were the words “Rebellion to Tyrants is Obedience to God.”

Later in our history, another oppressed group took up the Exodus story as their own. African American slaves also saw themselves in the Hebrew slaves seeking liberation. They even found their own “Moses” in a president whose name happened to be Abraham.

The revelation that Israel’s modern flag had its roots in Massachusetts, in that sense, doesn’t surprise me. A front-page Boston Globe story that ran during the mission detailed the research of Brandeis University professor Jonathan Sarna, who traced the roots of the flag from a Columbus Day march of a few hundred Jews through Boston’s West End to the modern version flying in Jerusalem today.

Many people on the mission, Christians and Jews alike, felt the spiritual call of their own faith traditions while in Israel. It was a kind of bridge between ancient heritages and a bright future.

Economic development and prosperity is of course a shared goal. But in this spiritual center for three faiths, it’s impossible to neglect the purpose of this progress. Innovation should bring with it the possibility of a better future through a more just world. Some might even call it the possibility of redemption.

This connection became clear at a dinner sponsored by MAOZ, an organization founded by Bostonian Jeff Swartz to train the most talented young Israeli leaders in ways to shape a better and more just future for their country.

Shirin, a MAOZ participant, described her work as an educator who founded a school to improve the future of the Arab population of the Arab-Israeli town Lod.  She told us about her experience of discrimination and frustration as a young Arab woman and her father's faith that "education can solve everything."  With her school, she’s trying to do just that.

Looking to the Future

We saw firsthand how education and innovation are connecting Israel and Boston like never before, and I want to tell you about two shining examples from our trip.

Among the most interesting stops on our mission was a visit to MassChallenge Israel and a presentation at the General Electric Innovation Center in Tel Aviv.

We visited MassChallenge Israel, the Israeli site of Boston-based MassChallenge which is known as “the world’s most startup friendly accelerator.” It has been critical to the success of young, inspiring entrepreneurs from around our region, and now, the world. MassChallenge opened its Israel location in 2016, and it received over 500 applications for 44 finalist teams from across the world. It's an important part of seeding the future with innovation and bridging the "Start Up Nation," Israel, with the "Start Up Commonwealth.”

Later, we visited the General Electric Innovation Center in Tel Aviv. While everyone in Greater Boston looks forward to the opening of GE’s new global headquarters just down the road from CJP, GE already employs more than 500 people in Israel. To me, the fact that GE chose Boston and Israel for their most innovative work is a clear indication of the bridge between our two communities, and it represents the possibility of an even more powerful, hopeful, and prosperous future for us both.

Governor Baker’s visit is the latest in a long line of powerful economic missions to Israel. As someone who has been on several them, this was one of the most inspiring and memorable. And I know it is one that will lead to new connections between Israel and Boston for years to come.

At this time of uncertainty for Israel and for the U.S., this mission reminded us all that we continue to be bound together by innovative genius and by common values. That genius will bring us shared prosperity, and those values will lift us up and bring meaning and purpose to our communities and our lives.