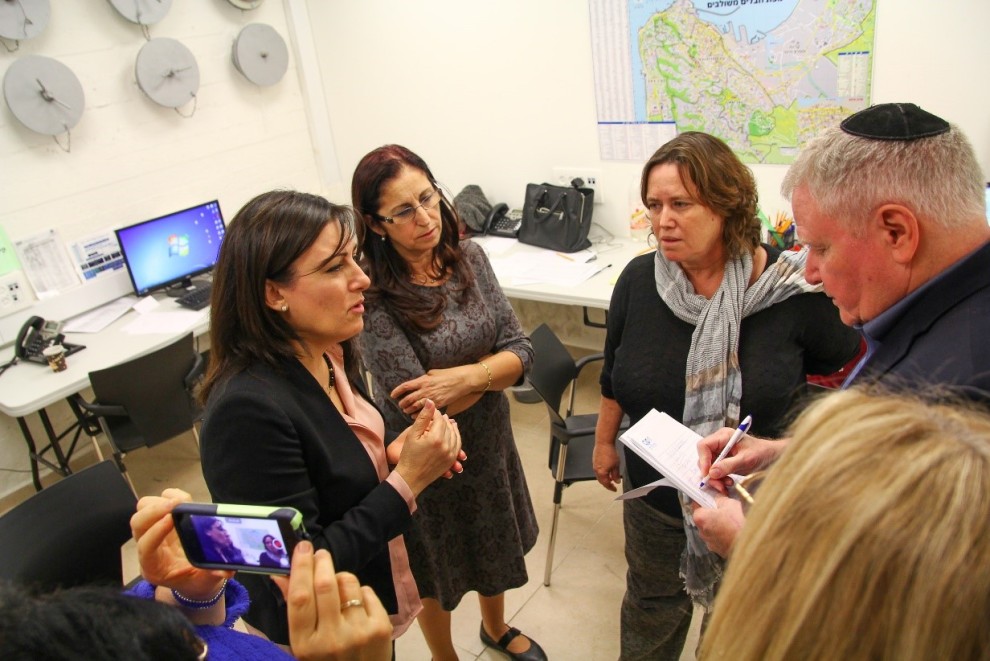 On Tuesday morning, we met with Haifa Mayor Yonah Yahav. The Mayor spoke with pride about Haifa’s response to the fires that ravaged some of its neighborhoods last week.

Mayor Yahav loves this city. He knows its strength is in its diversity, its strong economy, its world-renowned educational and medical institutions, and its growing start-up scene.

But on this day, Haifa, our "City of Hope,” was in need of rebuilding and support. But not lacking for hope. More than 1,500 residents are homeless or living in shelters. Three hundred homes were gutted by flames, with many more damaged. Beautiful public spaces, sources of civic pride, were blackened or destroyed.

And yet Haifa remains a "City of Hope."  Ilana Trock is one of the reasons why. Ilana is the Director of Haifa's Division of Education, Culture and Social Services. She has also been deeply involved in CJP’s Boston-Haifa Connection and helped to shape our Jewish Education initiative for Haifa's schools.

Ilana is an amazing, powerful, and caring leader with an enormously talented, dedicated, and innovative staff to whom she is devoted, and who, in turn, are devoted to her and the mission. Ilana served as our guide through Haifa's Crisis Management Center, and helped us understand why Haifa has ample reason to be hopeful.

Ten years ago, a fire of this magnitude or any type of disaster had the ability to disrupt every aspect of Haifa's civic and business life. I was in the city during the 2006 Lebanon War, when rockets were falling on the city daily. This was before the days of Iron Dome, the sophisticated, and in my opinion, miraculous system that quite literally knocks incoming rockets and missiles out of the sky. Haifa had to essentially shut down for more than a month. Small businesses were dying. The response to the crisis was disorganized. Bureaucratic conflicts hampered rescue efforts and the city felt compromised. Not surprisingly, many thousands of people relocated, including some of those responsible for the civil defense of the city and caring for its vulnerable.

A Test of Haifa’s Strength

Haifa's great strength, like Israel and the IDF, is to honestly look at its shortcomings and initiate a process of improvement. Continual improvement, whether learning lessons from failure or through adapting to changing situations, is essential to surviving and thriving in a very tough neighborhood.

In 2006, the process of evaluation and change began under the leadership of Mayor Yahav and his team. The Boston-Haifa Connection was proud to participate, beginning with a $2 million grant to MATI for small business loans that helped keep many businesses afloat and set the stage for recovery. We also provided more than $800,000 to help create Haifa’s Crisis Management Center and enable some of the training required for staff and volunteers so that it could effectively mobilize when necessary.

Last week’s fires provided the first true test of the new system. A fire started in Haifa on Thursday morning and, within two hours, was devastating large parts of the city.  A decision was quickly made to evacuate 60,000 – nearly a quarter of the city’s population – and relocate them to temporary shelter. These included the elderly, people with illnesses, and people with disabilities. Thanks to these efforts, there were no fatalities and very few injuries.

With Haifa now free from the immediate threat of fires, Ilana led us on a tour of the Center that worked so well to ensure the safety of Haifa’s residents amid a widespread and extremely dangerous situation.

The Center is an underground concrete bunker filled with more than a dozen offices, meeting rooms, and work spaces with a technologically sophisticated Command Center at its core. In an emergency, it’s managed by an inter-agency group consisting of the police, the IDF, human services staff, the Fire Department, and Magen David Adom.  There is a clear command structure and lines of authority. Everyone we spoke to saw this as a tribute to the new system and the hundreds of committed staff and volunteers who gave their hearts and souls to make it work.

The effort was coordinated through the Crisis Management Center and it worked as near to perfectly as a thing can. When I walked through the Center on Tuesday, more than 50 people were on the phone, providing rapid response to citizens in need. Ilana and her compassionate staff made every caller feel that they were talking to someone who really cared.

The Center could deploy hundreds of staff and volunteers to help those in need. City departments and government offices worked in close partnership in the emergency. The well-organized and expertly trained volunteers performed beautifully.

Later in the day, we visited people whose homes were destroyed and surveyed the damage. They were deeply saddened by the loss of their homes and the mementos of a lifetime of family and friends. Nonetheless, they still looked with great hope to the future.

Especially moving was a visit to Matnas Ramot Begin, a community center. Clothes and toys and furnishings were arriving hourly in response to requests posted online by the volunteer staff. Fire victims came in and took what they needed, which was given to them without question.  It was Israel and Haifa's great heart at its best.

Finally, I had a discussion with a group of police and fireman, as well as, staff of Magen David Adom, Israel’s equivalent of the Red Cross. They had been working without rest for days and were tired but very proud of their work and their “City of Hope” to which they were completely dedicated.

On Tuesday morning, CJP transferred an initial $300,000 to Haifa for emergency relief to keep hope alive - hope for Haifa and hope for our own community, which is greatly strengthened by the partnership and the love and heroism of our friends in Haifa.

Click here to donate to the Israel Fire Relief Fund.