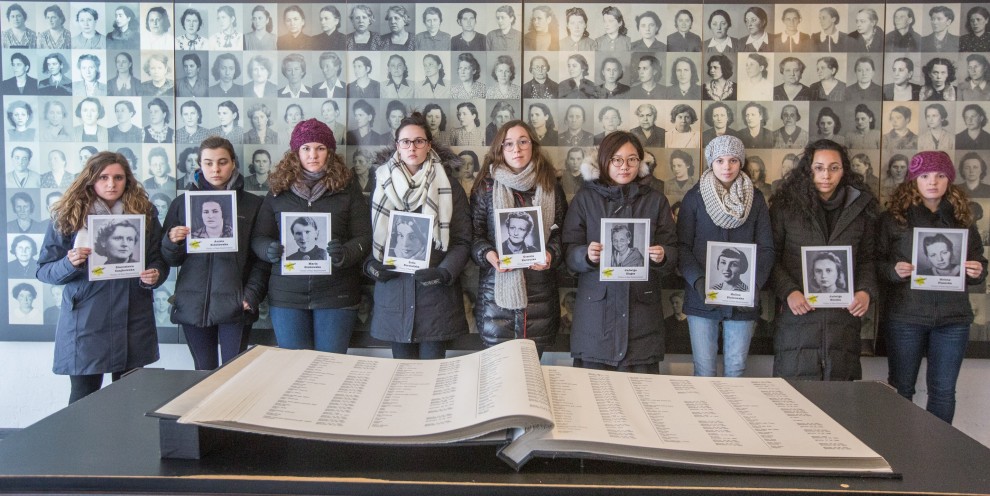 For the second year, CJP has organized the trip Together, Restoring Their Names, wherein local college students visit Europe for one week to engage in Holocaust memory service-learning. This year, ten students from Wellesley College, Brandeis University, and Boston University traveled to Germany. These fellows were selected from among dozens of applicants, with students coming from a variety of religious and academic backgrounds.

Part of CJP's IACT Campus Initiative, the program's goal is for students to learn about Jewish life in Europe before, during, and after the Holocaust. In just six days, students visited more than a dozen sites in Germany, including restored synagogues, cultural institutions, Ravensbruck (photo: students held the names and photos of victims of Ravensbruck concentration camp), and a trip to the Reichstag.

For Erin Miller, a trip participant and President of Boston University Hillel, a visit to the Reichstag served as a way to remember and preserve history — even when it's a dark history.

“As you walk along the corridors of the Reichstag, you see sections of the original stone and architecture on the ceilings and the walls — not everywhere, but in parts as if the past cannot be erased or forgotten. The new does not dismiss the old. Bullet holes from the 1945 battle still remain visible. More interestingly, when the Soviets took the Reichstag and won the battle, they proceeded to make the Reichstag a destination for Soviets. The walls were covered with writings, signatures, phrases, dates, and cities where people were from. Today, in certain locations, the architect uncovered these writings and displayed them for us to see — for us to learn and remember. The German government did not wash away the graffiti of their loss and, more importantly, their dark history. Instead, they left it staining the walls as a reminder of what was."

This year's fellows focused on the Holocaust within the framework of gender and women's studies; last year, in Poland, fellows applied a framework of how countries deal with painful heritage through commemoration and education.

Another aspect of this year's trip involved meeting members of the large Israeli community in Berlin, where more than 10,000 Israelis have immigrated in recent years. Israel-related trip content included a public diplomacy meeting at Israel's embassy in Berlin, lectures from speakers including Muslim-Jewish Conference founder Ilja Sichrovsky, and visiting a restaurant owned and operated by a team of Israelis and Palestinians.

In addition to learning more about Germany's role in Jewish history for their own study, the other key goal of this program is that the fellows will return to Boston to conduct campus Holocaust education during the spring semester. This will include organizing community symposiums based on the trip, publishing op-eds, and creating innovative programs for Yom HaShoah — Holocaust Remembrance Day. By bringing their experience in Germany back to Boston, students will enact the mission of Together, Restoring Their Names.