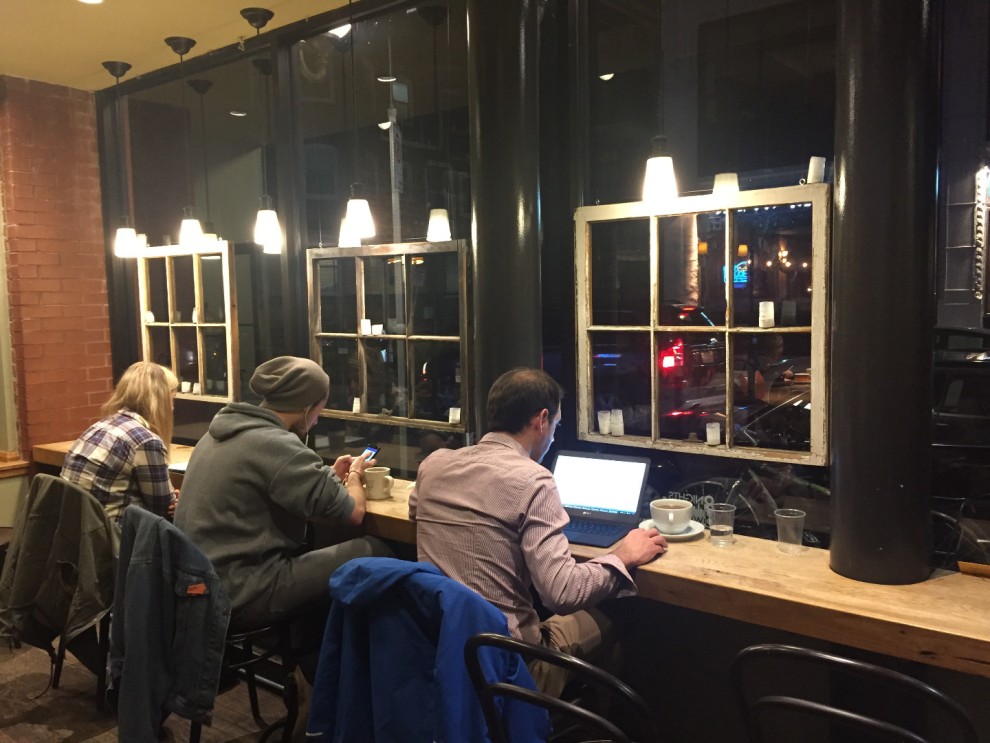 “The shamash is the candle on the menorah that lights all other candles…we each are like the shamash. We each have the ability within us to light up other people—to light up their lives, their smiles, with a positive statement which is being a good friend or being who we are.”

In a cozy coffee shop off bustling Hunting Avenue, something special was happening. Tape and uncapped markers were laid side-by-side on the large center table; salvaged wood panes hung from the walls and from the windows; and a growing crowd was busy writing words of hope for strangers to delight in.

Pavement Coffeehouse is no stranger to the arts. A close neighbor to Symphony Hall, the Boston University Theater and the Museum of Fine Arts (just to name a few), there seems to be creativity waiting on every corner. But on December 7, artist Tova Speter brought the art inside. As part of 8 Nights, 8 Windows—Boston’s first Jewish public art project—she wanted to bring people of all ages together to celebrate Chanukah and the strength of our Jewish community.

Tova’s “We Are the Shamash”—and 8 Nights, 8 Windows itself, a project of New Center for Arts & Culture’s director Laura Mandel— was launched through CJP's PresenTense Boston Fellowship as a way to bring the community together through artistic expression, and to brighten the holiday season with illumination and innovation.

And Tova’s installation is all due to the creativity and participation of the community. Everyone makes a lantern, and then gets to choose a lantern from a stranger to take home with them. Tova describes it, fittingly, as a make-and-take. 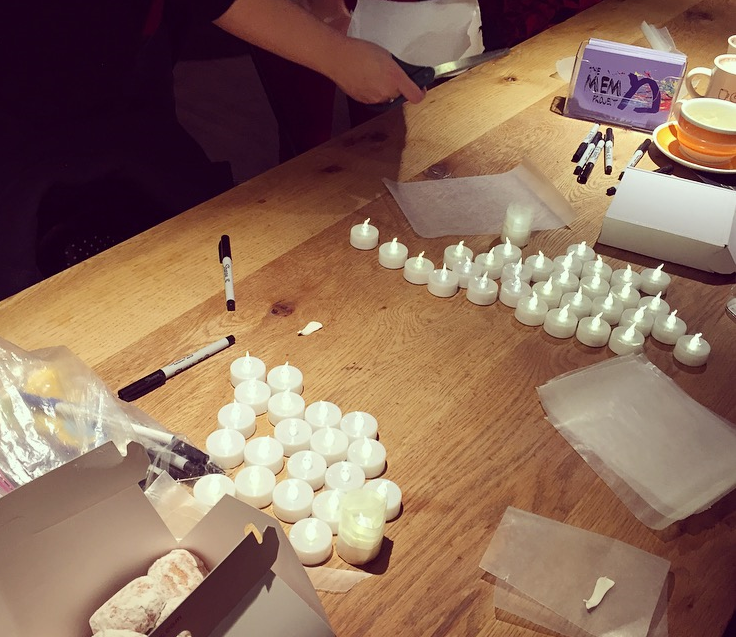 After squirreling away my supplies, I set to work making one of my own (guided by the artistic expertise of Tova’s young son, who, to his credit, put up quite well with all my questions and distinct lack of lantern-making skills).

The idea was simple enough: you fold up a piece of wax paper, write a wish for a stranger, tape the paper around the votive and secure it to one of the hanging panes. I’m easily excited by arts and crafts, but this night I was hardly the only one. A group of us from CJP were some of the first to arrive, but by the time we started crafting, the tables were filled up and artists of all ages were getting into it. 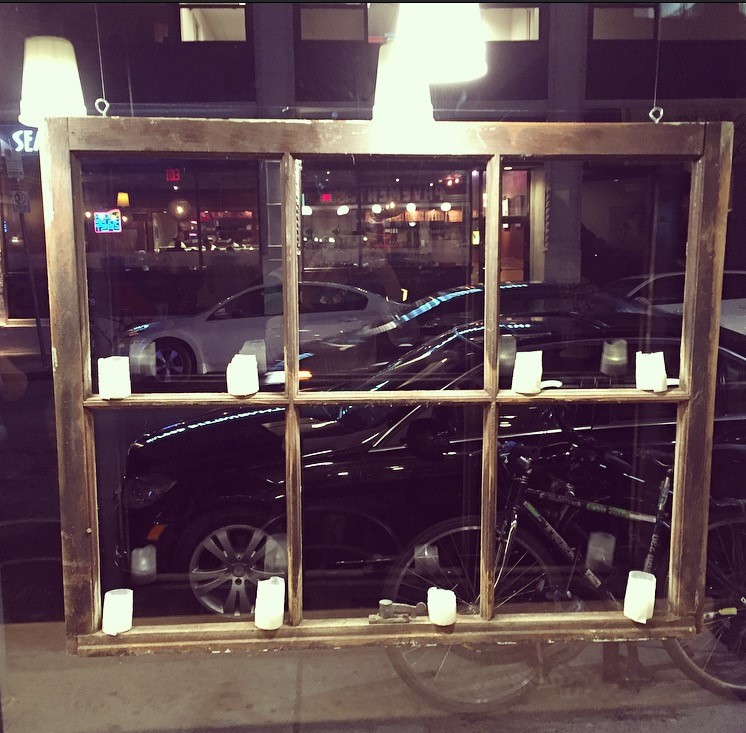 Once your lantern is ready, you find a spot on the hanging panes. You leave your words of hope for a stranger, and you take words of hope of your own from the frame. When it was my turn to select a lantern, I was lucky enough to spot the one I’d been eyeing all night. I nabbed it (and later added it to my bookcase). 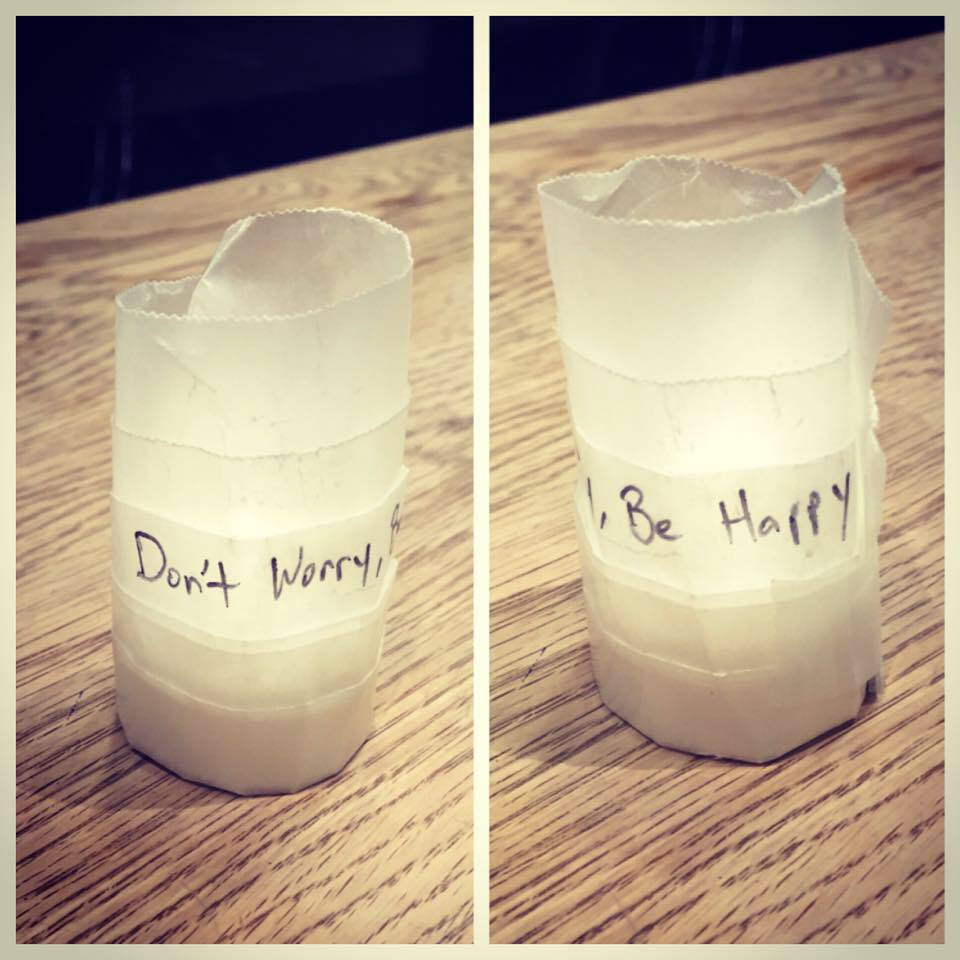 After wrapping up my contribution, I got a few minutes with Tova and was treated to an insider’s look at the project.

Q: What inspired you to create We Are the Shamash?

A: Part of the celebration of Chanukah, the festival of lights, is to put your candles, your menorah, in the window to share it with the community. I’m a community artist—it’s part of my background. I love things that bring it to the window and bring it to the people. In-and-of itself, this project brings art to the windows, but I wanted to play on that even more to highlight it, to bring actual window frames into the space.

Tonight, we’re doing this make-and-take as an opportunity for people to create a light and wish to give, and also to take a wish that somebody else put out. People are being a shamash in that they’re lighting others, and everyone is celebrating together the Chanukah spirit.

Q: Why do you think this project is important to Bostonians, Jews and non-Jews alike?

A: Any project that brings public art into spaces that don’t usually have it is a good thing. Hands-down, more art in public spaces is something I’m a fan of.

In this instance, where it’s Boston’s first Jewish public art project, it really gives an opportunity for us to share our culture and traditions with others. There’s a lot of lights around this season. To have more illumination out in the community is a great thing.

And it was clear from the energy in the coffee house that Tova was onto something important. It wasn’t just the participants (who were having more fun than I think they’d even anticipated), but also the response from everyone around them. People were peering over laptops, standing up from couches and chairs to take a closer look. Bystanders were smiling and beginning to mill about the windows, peering at the lanterns and their words of hope. The festival of lights had begun, and we were all lucky enough to be part of it. And the best part? Our little lanterns at home are there to remind us all season long that we’re part of something bigger. 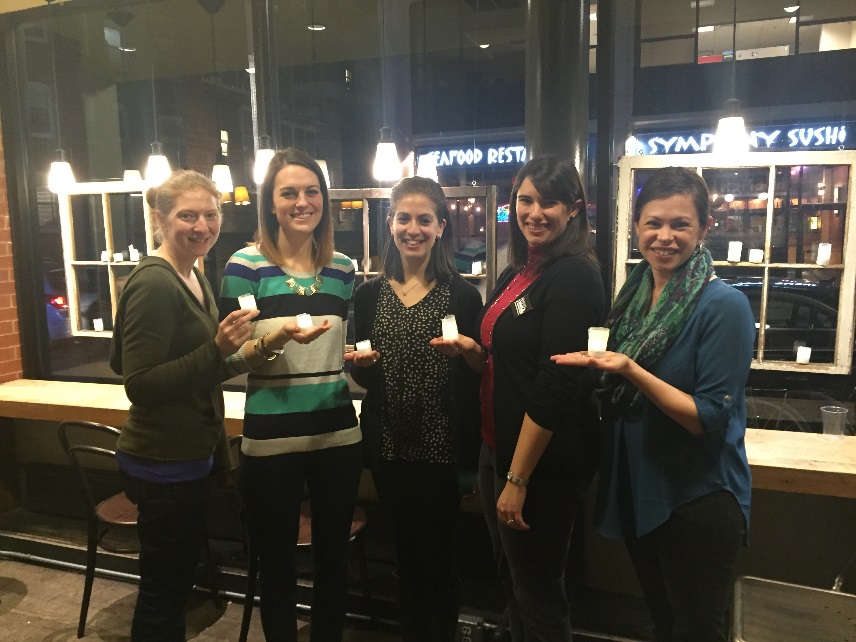 There’s still time to views Tova Speter’s  “We Are the Shamash” and other 8 Nights, 8 Windows art installations now through December 14, 2015. Learn more at 8Nights8Windows.com.