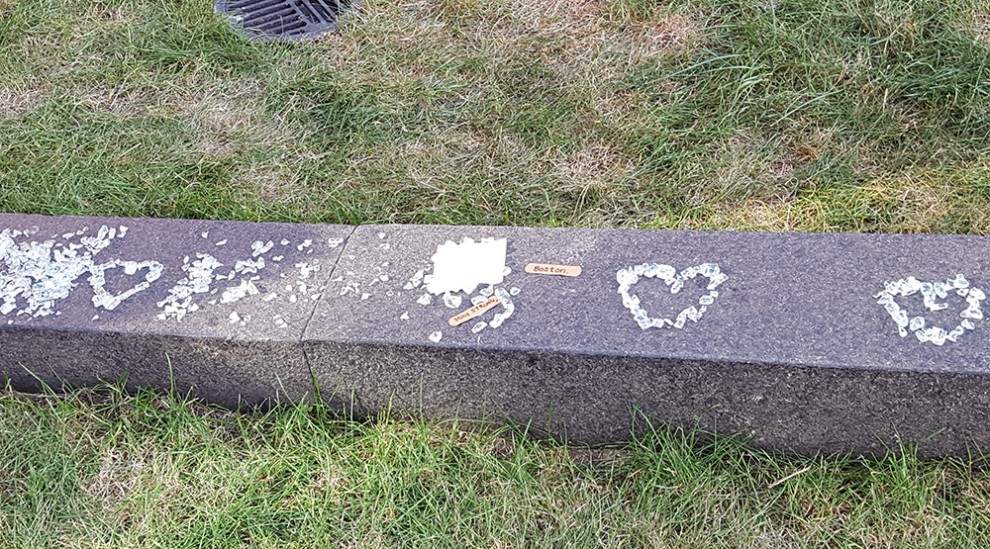 Guest blogger Drew Zang is raising money for the New England Holocaust Memorial, which was desecrated for the second time this summer. These are his thoughts. This is his plan.

I’m not exactly sure what it was about the desecration of the New England Holocaust Memorial last week that struck so deep in my core. This is something I am wrestling with.

There are, of course, obvious reasons. I am a Jew and this type of anti-Semitism is an indictment on my religious heritage and beliefs. There’s the local nature of this, as I live less than a mile from the Memorial and love my city. There’s also a fear of the unknown – I am a 31-year-old married man who is scared to bring a child into this world knowing such hatred exists. How do I explain to my children that people will hate you for no reason other than your beliefs and ideals are different from theirs?

The optimist in me believed that as the older generation faded and as our country evolved socially, we would outgrow racism, hate, and anti-Semitism. That’s why it’s so challenging to sense a common thread that runs between Charlottesville, VA, the desecration of the Holocaust Memorial in Boston, and the increasing number of anti-Semitic incidents nationwide. The organizers and participants seem to be getting younger, which is incredibly frightening. When you see torch-bearing teens and young adults marching and screaming “Jews will not replace us,” you can’t help but watch in total disbelief.

Whether we want to admit it or not, it is our peers on the other side of the moral spectrum. They are the ones pushing their crooked ideals and if we don’t meet them head on, things will not get better.

But I want things to get better, and my fear has transformed into a catalyst for action. I will not sit on the sidelines and my friend, Sam Andler, feels the same.

Sam and I have started making phone calls to young adult friends and colleagues, urging them to get involved by donating to the New England Holocaust Memorial. Your support will help ongoing repairs, continuing programs, materials, and operations that educate the public about the Holocaust.

This Memorial will always serve as a reminder of the horrors of the Shoah and our duty to preserve memory.

While we love seeing organizations in our community step up – like CJP and ADL – what Sam and I are doing is completely organic and we’re relying on those closest to us.

This is a stark reminder of our responsibility – for the young adult Jewish community and the younger generation overall – to stand shoulder to shoulder to stop this wave of hate and bigotry from gaining further momentum.

Sam and I are determined to bring awareness to our young adult community. We’ve already received several pledges from our friends, but this is just the beginning. The future is in our hands and we need your help.

We need to step up. Not alone, but together. Our voices should be louder and our actions should be greater.

Click here to donate to the New England Holocaust Memorial.