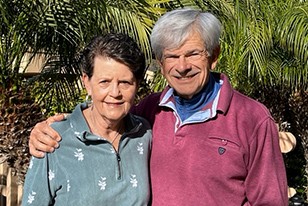 Growing up in Providence, Rhode Island, Joyce Pastor was taught the importance of Jewish service from her zaydie (grandfather), who, as the shamas at Temple Emanu-El, managed the congregation’s day-to-day affairs.

A few states over in New Jersey, Bruce Pastor was raised with a strong sense of Jewish philanthropy, thanks to his parents’ passion for Jewish community, federation life, and fundraising for the fledgling state of Israel.

Joyce and Bruce married in 1967. After Bruce completed his medical training in Boston, he joined the Brookline medical practice of a well-known Jewish physician and became a member of the medical staff of Boston’s Beth Israel Deaconess Medical Center. It was then that the couple was introduced to CJP, which gave them a platform to turn the lessons from their past — service and philanthropy — into meaningful action.

“We saw how CJP was really an effective platform for distributing funds,” says Bruce. “It made more sense to us to give to CJP than to individual organizations. CJP has smart people making good choices for the entire Jewish community and its needs.”

As the years went on, the Pastors deepened their connection to CJP and Greater Boston’s Jewish community. Bruce traveled to Israel on a CJP young leadership mission, attended many CJP health professions events, and worked to engage his Beth Israel colleagues with CJP. He also traveled to Russia twice, through CJP’s partnership with the American Jewish Joint Distribution Committee (JDC), to help train physicians there who were caring for Jewish seniors in need during the collapse of the Soviet Union.

Joyce served as Co-chair of a WP Pomegranate Society event and Co-leader of two women’s study missions to Israel. For years, she sat on the WP Executive Committee and became a Lion of Judah. From there, Joyce found her passion in Jewish film and joined the Board of the Boston Jewish Film Festival, eventually leading the Board as Chair. She also became President of Temple Shir Tikva in Wayland and a Co-founder of the Weston-Wayland Interfaith Action Group.

“CJP was a wonderful beginning for me,” says Joyce. “It helped me get involved – and stay involved – in the Jewish community. I met a lot of women who are still my good friends. CJP was an important steppingstone on the pathway to where we are now.”

The Pastors also credit CJP with helping them build their Jewish family; their older daughter, Caroline, met her husband on a CJP young adult mission. Their younger daughter, Lauren, connected with her husband through a friend of a friend from a different Israel trip! Joyce and Bruce are proud of the leadership of current CEO and President Rabbi Marc Baker, and CJP’s support of synagogues and Jewish education, which have played important roles in shaping the Jewish identities of their four granddaughters.

To ensure Jewish continuity, the Pastors have included CJP in their estate plans, a process that Bruce says was easier than he anticipated.

“I think that Jewish life is important to preserve; it’s truly a core belief for us,” he says. “In an uncertain world, it’s reassuring to me to help ensure our traditions and people continue long into the future. If you set up the right institutions, the Jewish people will come.”

For Joyce, cementing her legacy is connected to her past.

“I have such strong emotional ties to my zaydie, to whom I was very close,” says Joyce. “With him, I lived Judaism seven days a week in the Temple. It’s just so important to me that the Jewish line keeps going. So far it has, in part, thanks to CJP.”