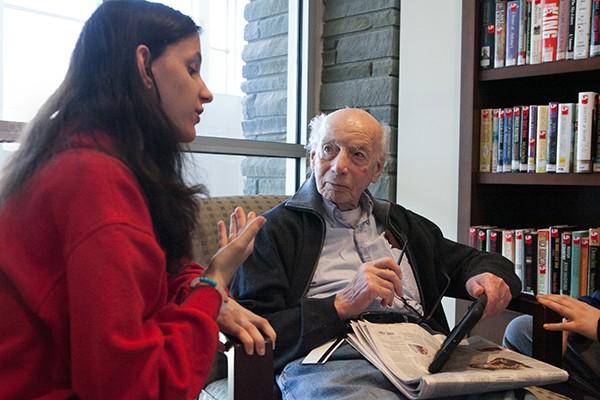 The prayer room at NewBridge on the Charles, a Hebrew SeniorLife assisted living community, is a place for the residents to reflect and to pray. But, many of them had trouble accessing the space – there were not a lot of volunteers to help bring residents, some of them in wheelchairs, down from their rooms, and elevators were crowded. Rabbi Karen Landy, the chaplain at NewBridge, often led services from a music stand because the space lacked an adjustable height amud, the table for reading Torah and leading services.

How could the space be redesigned in an accessible way that would make the residents feel comfortable? And, who could complete the work?

The answer came in the form of high school volunteers through the Design Lab, a program of Brandeis High School Programs, supported by CJP, Union for Reform Judaism, and the Jim Joseph Foundation.  This project is one way that CJP engages teens in Jewish life, learning and service, and unites community partners to solve big problems.

“We were looking for opportunities where teens could be contributors in tangible ways,” says Reuben Posner, director of youth engagement at CJP. “This is the challenge we brought to Brandeis High School Programs.”

The Design Lab launched in 2014 with a mission to teach motivated Jewish high school students the creative, design and building skills that can help address problems in Jewish communities. The students learn that they are not just passive recipients of Jewish tradition, but active participants and literal builders of the Jewish world.

Putting the “design” in the Design Lab

And while doing great work is a part of what the Design Lab does, thinking big thoughts is just as important. Design thinking starts by envisioning a better future situation, instead of simply solving a specific problem. Rabbi Charlie Schwartz, who runs the Design Lab and is senior Jewish educator, director of BIMA and Genesis at Brandeis, helped bring the element of design thinking to the project.

“The Design Lab is important because it provides a different kind of engagement in the Jewish community, one that is authentic and powerful, that has teens using their heads and hands, that connects them deeply to the community and tradition while teaching them skills they can draw on for the rest of their lives,” says Rabbi Schwartz.

“When I heard that the seniors at NewBridge needed a prayer space, I was immediately on board,” says Dylan Volmer, one of the Design Lab participants.

When the teens first arrived at NewBridge, they interviewed the residents about what they would like to see in a new prayer space. “The overarching theme was that they all wanted a space that felt more like a true synagogue,” says Dylan. “So we all just took that idea and ran with it. We started to come up with ways we could make the space feel more sacred and special.”

As part of the volunteer set up team, Dylan’s goal was also to help transport residents from their rooms to Friday night and Saturday morning services in the new prayer room. “Often times, people will miss services because they can’t be transported downstairs. It’s difficult trying to fit all those who need wheelchairs into the elevators in an efficient manner,” Dylan says.

Over eight Sundays of hard work, performed by 21 Jewish high school students from across Greater Boston, the students rolled up their sleeves and plugged in their power tools, constructing bookshelves to hold prayer books, preparing to install a curtain partition to separate the prayer room from the main hallway, and building furniture.

“One of my favorite projects the teens completed was the adjustable height amud,” says Rabbi Schwartz. “They realized that an actual amud would make the space feel more like a synagogue and went the next step to make it accessible for those in wheelchairs. I was super impressed that they were able to draw on their interviews, observations and empathy to come up with a design solution that really meets the needs of the residents and staff.”

On April 3, 2016 the teens revealed their plans and progress on the room, and what they hope the finished space will look like, to great success. “It was beautiful to see the accomplishments and the relationships they built,” says Reuben.

Marci Borenstein, the director of Brandeis High School Programs, agrees. “Some of the most meaningful moments were the moments of connection between the teens and the residents. All of a sudden we would realize that we were missing a couple of our teen designers, and twenty minutes later they would reappear having just met the inventor of the glue stick, or learned about a resident's family history that led him from Poland to Israel to Boston. Watching the residents and teens engaging in these conversations was a real highlight of the experience.”

The Design Lab, which has completed two previous projects, has been wonderfully received. The teens and the people at the sites where they volunteer have benefited in so many ways—and the good work is being passed on, thanks to Dylan and his team.

Dylan came up with a solution to helping the seniors get to the new prayer room. “The solution is simple: more volunteers,” he says. Dylan and his fellow volunteers recruited their friends —who were not part of the Design Lab —to help residents into the prayer room for Shabbat. The teens continue this service today.

Dylan says he’s learned a lot about building, and about relationships. “Everyone was unique and interesting in their own way; getting to know them was my favorite part of this experience," he says. "I learned that a greater diversity of ideas makes everyone better."

Rabbi Schwartz is impressed with the outcomes as well, and the feedback he’s received. “I had a parent tell me, ‘I haven't been this proud of my daughter since her bat mitzvah’, and a resident said, ‘This is the best example of l’dor v’dor (from generation to generation) I have ever seen,’” says Rabbi Schwartz.

Learn more about the Design Lab and apply for the next session! The Design Lab is a partnership of CJP, Brandeis High School Programs, and Union for Reform Judaism, with funding from the Jim Joseph Foundation.