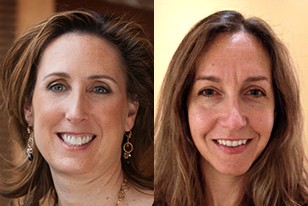 On Saturday, January 15, Malik Faisal Akram entered Congregation Beth Israel in Colleyville, Texas, pulled a gun on members of the congregation, and held them hostage for the next 11 hours. Subscribing to the false belief that the rabbi of New York’s Central Synagogue had the power and influence to authorize the release of a prisoner serving an attempted murder sentence in a prison near Colleyville, the terrorist expressed a number of antisemitic statements to the authorities attempting to negotiate with him.

Unfortunately, an event like this is neither uncommon nor unexpected. According to data from the Federal Bureau of Investigation, Jews — who make up no more than 2% of the U.S. population — were the target of 54.9% of all religious bias crimes in 2020, a 9% increase from the year before.

For Lisa Wallack and Karyn Cohen, the uptick in both global and national rates of antisemitism and anti-Zionism was the impetus for their decision to serve as Co-chairs for CJP’s Fighting Antisemitism and Anti-Zionism Task Force, formed in 2019. Both Lisa and Karyn are longtime CJP volunteers and donors and Karyn is Director of Jewish Life and Israel at the One8 Foundation.

“When we first convened the Task Force, the number of experiences that people were reporting — or their kids were reporting — was extraordinary and very disconcerting to all of us,” Lisa says. “And the stabbing of Rabbi Noginski in Brighton was a terrifying, frightening, close-to-home event that sent a chill through the entire community and I think it’s become an issue that’s top of mind for everyone.”

According to Karyn and Lisa, lack of awareness and an ignorance of history constitute some of the bigger issues faced by the Task Force.

“We’re coming out of a period of time, post-World War II, where Jews have had a great deal of integration and positive experience in American society and American culture,” Karyn explains. “What I find alarming is that what we’re seeing is that a lot of people don’t know anything about Judaism, they don’t know anything about the history of Jews, and they don’t know anything of the persecution we’ve faced. We have generations that are coming up that don’t have any context to put hatred of Jews and misinformation and misunderstanding about Israel. We’ve seen research by Tufts professor Eitan Hersh that young people are far less supportive of Israel and more antisemitic than older generations — and that is very concerning to me.”

“This lack of understanding extends to the Jewish community as well,” Lisa adds. “Our kids aren’t as alarmed by these incidents as their parents and the older generations are. They themselves are in denial and not having the same alarmist reactions or seeing these incidents as a systemic problem. Here we are, as adults, trying to sound an alarm and say, we need to take this seriously, and we have this next generation that grew up so comfortable, not feeling threatened or vulnerable as Jews. How do we help them see it for what it is?”

Here we are, as adults, trying to sound an alarm and say, we need to take this seriously.
Lisa Wallack

Lisa, who also serves as Chair of the Task Force’s Safety and Security Committee, emphasized the critical role that both partners and CJP’s Communal Security Initiative play in combatting antisemitism.

“It’s so important to have programs like LiveSecure — the Jewish Federation of North America's and Secure Community Network’s effort to provide critical training to Jewish communal institutions, in collaboration with the Anti-Defamation League and local, state, and federal law enforcement,” Lisa says. “This training and collaboration provided the hostages with the skills that they needed to survive the Colleyville hostage crisis. Here in Boston, we’re so fortunate to have Jeremy Yamin and Daniel Levenson as CJP’s security experts, advising and preparing our community on how to be more safe and secure.”

Rather than buying into the national culture of cancelling and calling out, Lisa and Karyn believe that fostering understanding and relationships, increasing education, having the difficult and nuanced conversations, and “calling in” partners, administrators, educators, law enforcement, and government leaders are paramount to creating and maintaining a more secure community.

According to Karyn, “CJP is looking to work in collaboration and enhance the vision of our partners to engage a broader group of community members. And it’s OK if we don’t all agree. We have a tent that’s wide enough to collaborate and fight together.”

We have a tent that’s wide enough to collaborate and fight together.
Karyn Cohen

“We’re not going to solve this problem alone,” Lisa says. “We’re identifying gaps and avoiding redundancies and using each and every one of the dollars we receive from generous donors to make the greatest impact possible. We’re also working with other federations — nationally and globally. Our fundamental priority is to keep our community safe and ensure that institutions are protected and trained. However, CJP’s primary goal is engaging people meaningfully with Jewish life and creating a welcoming and inclusive environment. If people feel afraid, they’re not going to participate. The threat we are facing is not just the radicals who want to hurt us — but fear. We have to be more than anti-antisemitism. We have to be proud Jews engaging in a vibrant and thriving community. We could spend all our money fortifying, but if people don’t see the value and the purpose and aren’t excited to be here with us, we won’t have been successful.”

We're rallying the resources and the leaders our community needs to fight hatred. Our Fighting Antisemitism and Anti-Zionism Task Force includes four subcommittees:

Ensure that communal organizations in Greater Boston have the resources and professional support to implement best-practice security protocols that foster welcoming environments and thriving Jewish life.

Deepen existing relationships and create new key relationships, within and beyond the Jewish community so that our coalition is more unified and better prepared to fight antisemitism and anti-Zionism.

Ensure that CJP invests in strategies that support young people in building proud Jewish identities and equips them with the resources they need to effectively combat antisemitism, anti-Zionism and Jew hatred of all kinds.

Design and implement communications strategies that proactively address antisemitism and anti-Zionism, provide pathways for community action, and respond to priority topics and crises as a community.

Learn more about our Antisemitism Initiative.