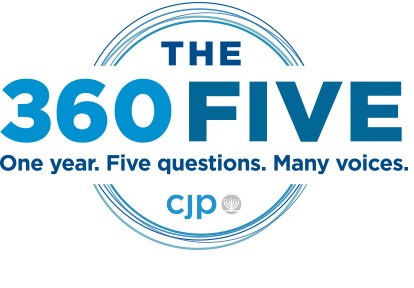 What are the strengths of the Greater Boston Jewish community? How can we create a more vibrant Jewish future? What’s getting in the way?

These and other questions will be at the heart of a year-long listening tour that will involve meeting with hundreds of community members in an ongoing, engrossing conversation about issues of critical interest.

The project, dubbed “360Five: One year. Five questions. Many voices.” stemmed from Rabbi Marc Baker, CJP's new President and CEO, wanting a better understanding of the diverse people and institutions that make up Greater Boston’s Jewish community. It builds on the findings of the 2015 Jewish community study and the framework created by the recently completed CJP strategic plan.

“The 360Five project is an example of how we should be doing our work. We should always be listening to the people who make up our Jewish community.” Baker said. “At the same time, we’re starting a new conversation and bringing in as many voices as we possibly can.”

Registration is open for six events all around Greater Boston.

Getting diverse groups of people to offer their views on a question as critical — as well as complex, subjective, and perhaps elusive — as their vision for the Jewish future requires careful planning and active listening.

“This was one of Marc’s top priorities when joining CJP — to gain not only a deeper understanding of the many communities that make up Greater Boston’s Jewish community, but to strengthen existing relationships and form new ones with those who might not be touched by CJP’s work,” Yturregui said.

Yturregui has been working closely with Baker and a cross-functional task force at CJP to ensure the questions and events drive a productive conversation that can help inform CJP’s work for years to come.

“We spent a lot of time discussing questions that would be relevant to everyone. And that’s because we want everyone who has a stake in this conversation to relate to and be able to answer the questions,” Yturregui said.

The second challenge is planning a listening tour that invites everyone to join the conversation. Events will range from small, informal gatherings at people’s homes to town hall-style events at large venues in Brookline, Cambridge, Canton, Lexington, Natick, and Salem. In addition, representatives of Boston-area organizations that focus on Israel, groups of young adults working for Jewish institutions, clergy, and many others will meet with Marc as part of the listening tour.

While 360Five represents a new series of conversations for CJP, Baker noted the idea of listening to the community didn't begin with 360Five and it won't end with it either.

“If we’re truly in service of the community, we’re always on a listening tour,” he said.

Information about upcoming 360Five events can be found on cjp.org.