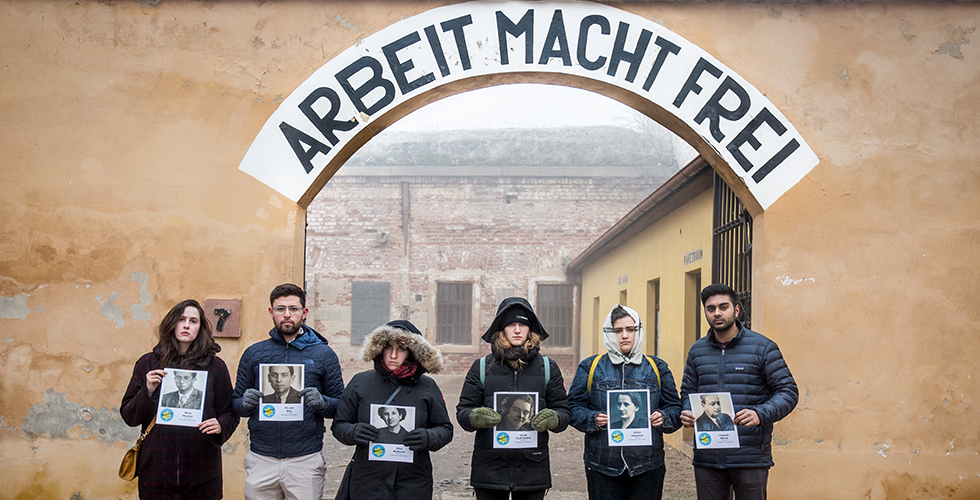 In 2015, a group of local college students started a Holocaust memory service-learning project called “Together, Restoring Their Names" (TRTN). As one of many follow-up projects created through CJP’s IACT Campus Initiative, the Fellowship includes caring for local Holocaust survivors and organizing education programs on campus.

Recent studies demonstrate that Americans have an alarming lack of knowledge when it comes to the Holocaust — particularly among young adults. Millions of Americans are unaware of the genocide of six million Jews by Nazi Germany and its collaborators during World War II. Disturbingly, both Holocaust denial and antisemitism are surging in parts of the world. In addition to these trends, a sizeable portion of our country’s 200,000 Holocaust survivors live in poverty or isolation.

“Together, Restoring Their Names” is based on the premise that some of these trends can be reversed. During the past four years, thousands of students have participated in events and programs organized by TRTN Fellows, including survivor visits to campus, screenings of new Holocaust films, and presentations about our missions to Europe. Additionally, the Fellows — who are of all backgrounds — seek to be of service to the local survivor community, whether by offering home visits, recording testimony, fundraising, or other forms of assistance. 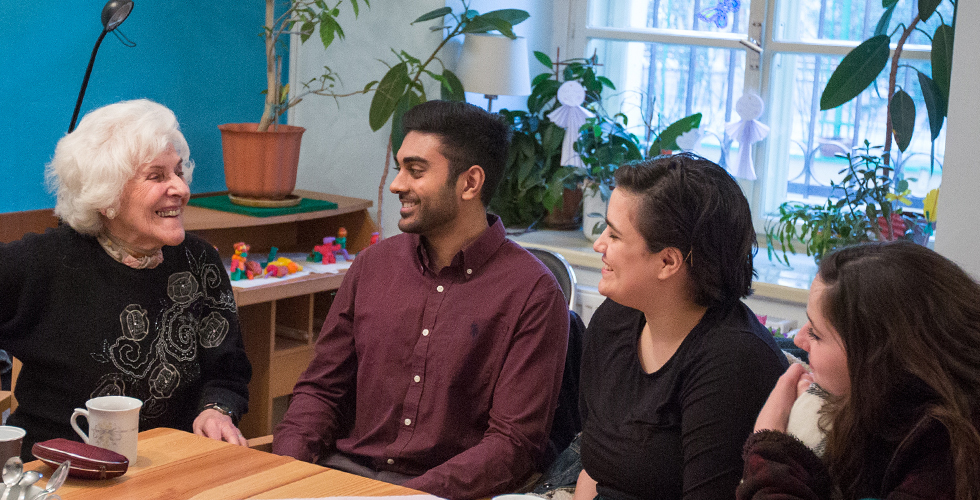 For Brandeis University senior Elan Kawesch, the most meaningful part of the Fellowship is serving with local Holocaust survivors. As the student director of TRTN since 2016, Elan has worked to connect the Fellows to these local heroes.

“Until I started learning about local Holocaust survivors, I would not have guessed so many of them were living in such difficult conditions,” Elan said. “Even for survivors whose basic needs are met, some of them are desperate to have more social interaction. It’s very special to be able to give them that in their home or at one of the community events we send Fellows to.”

Since last fall, 19 Boston-area survivors have been visited by volunteer pairs of TRTN Fellows. Fellows have also attended or assisted at events including the large “Café Europe” gatherings of survivors and Yom HaShoah commemorations.

“Whenever possible, we try to have survivors visit campus,” Elan said. “I have had requests from professors looking to ask a survivor to speak in class, and we get requests from student groups every week. There are unmet needs on the part of both the survivors and the community, and yet soon there won’t be any survivors to bear witness.” 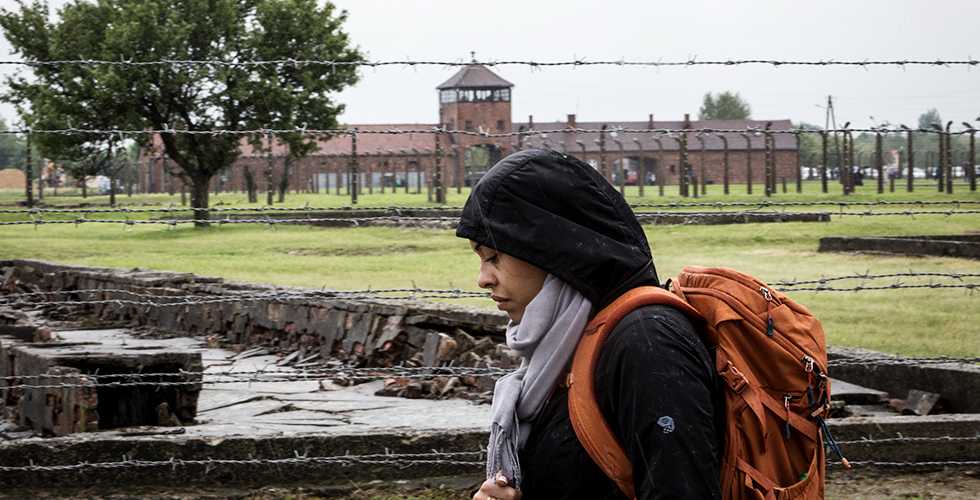 Brandeis University student Cheyenne Paris walks on the infamous "Road of Death" at Birkenau during the 2019 Together, Restoring Their Names trip to Poland.

Since the “Together, Restoring Their Names” Fellows got to work in 2015, local campuses have seen more Holocaust education and awareness programs. From Wellesley College to Worcester Polytech Institute (WPI), Fellows organize their own conferences and academic panels about, for example, the missions to Europe and the resurgence of antisemitism on campus.

“Participating in the TRTN mission to Prague was the kind of experience I wanted to have for so many years,” said Fellow Ariel Goldner, a recent graduate of WPI. “I saw synagogues that are older than the United States in Prague. And then we went to what the Nazis called Theresienstadt, a ghetto from where thousands of people were sent to Auschwitz. From there I got a small sense of the lowest point in Jewish history.”

During her two years as a Fellow, Goldner visited with several survivors and organized a conference on campus about the Holocaust and postwar genocides since then. She participated in several other IACT projects during her time at WPI, including Alternative Spring Break in Haifa.

‘We will write our history’

The “Together, Restoring Their Names” Fellows seek to create tangible reminders of what was lost during the Holocaust. Through social media, many thousands of people have viewed original videos and photo montages based on the missions to Europe and new presentations of Holocaust history.

Whether in Krakow, Berlin, or Prague, each TRTN mission to Europe is organized around an academic theme, and include pre-trip readings and feature opportunities for each Fellow to teach a component of the itinerary. Past themes have included “We Will Write Our History,” an intensive writing seminar at Auschwitz-Birkenau, and “Children of the Holocaust,” our mission to the Netherlands.

Back on campus, the Fellows write op-eds, present on panels, and host events. At the same time, the missions give students new impetus to keep reaching out to our local survivors, many of whose accounts have yet to be recorded.

“I would like to thank ‘Together, Restoring Their Names’ for assigning [Fellow] Amy Li (from Wellesley College) to help me in my project to put into writing the problems and plight my parents and my family had to endure in order to survive the Holocaust,” wrote Bert Katz, a survivor who received assistance on completing his memoir from Amy.

“Amy’s editing had a tremendous impact on the final copy of my book,” wrote Katz in an email to TRTN. As a boy in Germany, Katz and his family escaped the Nazis through Siberia, China, Japan, California, and finally Ecuador, where his family put down roots. Later in life, he became a leader of Brookline’s Jewish community. 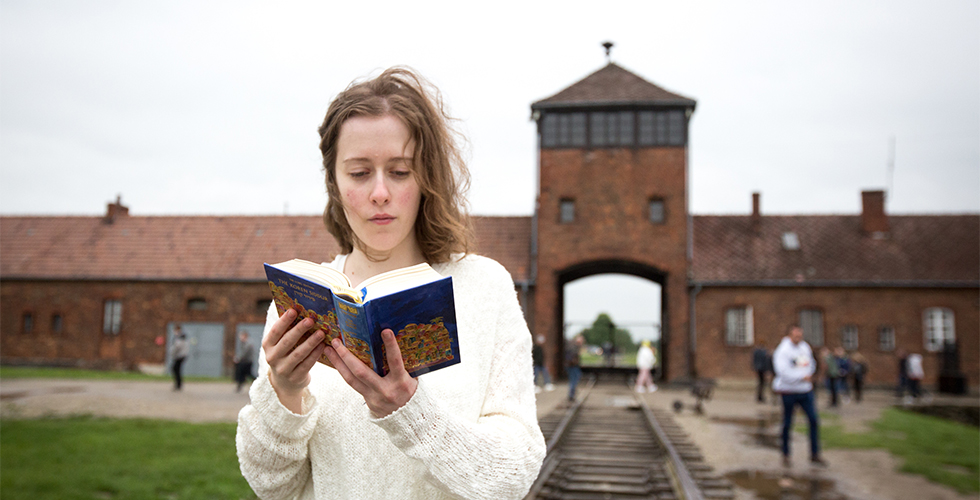 Brandeis University student Maddie Herrup reads from a siddur on the train tracks in front of the guard tower at Birkenau during the 2019 Together, Restoring Their Names trip to Poland.

With Holocaust denial and antisemitism on the rise, the need for increased education, security, and awareness is acute. The TRTN Fellows aspire to carry the torch of memory into the future, which includes connecting their peers to the resilience of survivors and the courage of “upstanders” who risked their lives to help Jews.

Whether on a mission in Europe, creating social media content, or attending “Café Europa” with survivors, the Fellows’ activities all connect to Holocaust memory service-learning. In the assessment of some of the project’s leaders, TRTN fills a large gap in knowledge when it comes to Generation Z and the Holocaust.

“There’s a widespread assumption that Jewish students today were told too much about the Holocaust while growing up, or that their identities are based too much on the Holocaust,” said Misha Vilenchuk, a TRTN Fellow and graduate of Brandeis University who participated in the Fellowship’s inaugural “active memory” mission to Poland.

“However, if you speak to Jewish students on nearly any campus, most will tell you the exact opposite. They will say they wish they knew more about what took place and they will say they want to do something to make sure it never happens again.”