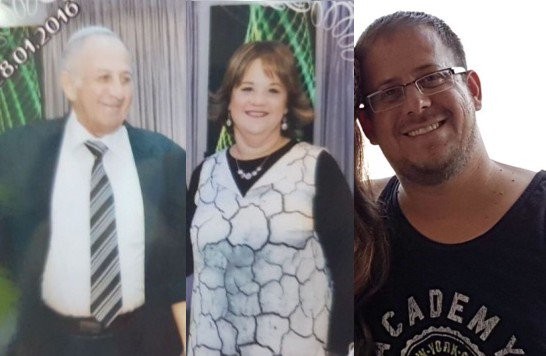 We are reeling from news of the murder of three members of the Salomon family in the West Bank community of Halamish.

On Friday night, Yosef and Tova Salomon sat down to Shabbat dinner with two of their children and five grandchildren. The family had gathered to celebrate the birth of a new grandson.

As the family waited for guests to join the celebration, a 19-year-old Palestinian from a nearby village entered the home armed with a knife and attacked the family members. He stabbed to death Yosef (70), his daughter Chaya Salomon (46), son Elad (36), and seriously wounded Yosef’s wife, Tova. A neighbor, an off-duty soldier, heard the screams, and rushed to the home, shooting and wounding the attacker.

Photographs of the Salomon home released by the army show the shocking savagery of the attack. Tova Salomon underwent surgery on Saturday morning and awoke to learn that her husband and two of their children were dead.

The mother of the terrorist released a video in which she says that she is “proud of her son.” Sadly, this is an all too common response; one born from the rampant anti-Israel incitement that poisons generation after generation of Palestinian children. The Salomon family, like the Fogel family and Hallel Yaffe Ariel, and Dafna Meir, and so many other innocent Israeli men and women, have paid for this hatred with their lives.

Our heart breaks knowing another Israeli family is destroyed, another community is ripped apart, and a country and its people are in mourning. As always, the people of Israel are in our hearts, our hopes, and our prayers.

On Friday, CJP issued a statement about the ongoing unrest in Israel. Since then the situation has remained volatile with four Palestinians killed in clashes with Israeli forces, and another killed when a petrol bomb he was planning to throw exploded prematurely.

We are devastated by the loss of innocent lives and pray for reason and calm to prevail. We ask God to make true the words in Psalms, “May the Almighty grant strength to God's people; May the Almighty bless God’s people with peace.”