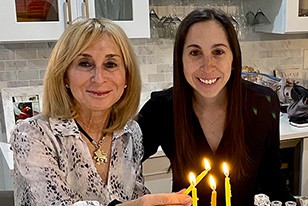 For more than 20 years, Debbie Kurinsky’s passion and philanthropy has touched nearly every corner of Boston’s Jewish community.

She’s volunteered with CJP’s Boston-Haifa Connection, made her own career stops at organizations including JCC of Greater Boston and Jewish Community Housing for the Elderly (now 2Life Communities), served as Board President of The Vilna Shul, and even met her husband, Geoffrey, at a CJP event in 1982.

Debbie learned about the values of caring, tikkun olam (repairing the world), and tzedakah (charity) at a young age. She was raised in a small Rhode Island town, where most of her relatives lived in the same neighborhood and her grandparents hosted weekly Shabbat dinners. Her parents were “amazing role models;” her father was active in B’nai B’rith International and her mother in their local Hadassah chapter. Both taught her the importance of leadership, tradition, and Jewish continuity.

Through all of her Jewish involvement, Debbie’s biggest source of pride has come from sharing her love of Jewish life and CJP with her children, Sarah Millen and Evan Kurinsky.

Debbie carried the lessons and values from her childhood forward as she and Geoffrey raised their own family. Over the years, they prioritized Jewish education, Jewish summer camp, observing Jewish rituals and holidays together, and connecting their kids to CJP.

Growing up, Sarah and Evan also saw their mother’s commitment to building bridges between the Jewish communities in Boston and Haifa through her role in the creation of CJP’s Hatikvah Mission, which last ran in 2017. For several years, young active Israel Defense Forces officers came to Boston through the Hatikvah Mission to share their experiences with the local Jewish community.

“CJP gave me the opportunity to be part of the Hatikvah Mission, which was a life-changing experience for me and so many,” says Debbie.  “Hatikvah also helped me to instill in my children a sense of Jewish peoplehood and of shared values and traditions. What’s so great about CJP is that it not only gave me an outlet for expressing my Jewish pride, but it provides an infrastructure to allow my children — and the next generation — to have their own experiences."

CJP through all ages and stages

When Sarah was 15 years old, she joined her mother on a CJP Solidarity Mission to Israel and began to build her own connection to the organization. When she returned to Boston after graduating from Emory University, she participated in a young adult leadership program and was asked to co-chair a mission for members of CJP’s Ben-Gurion Society, which recognizes donors between the ages of 22 and 40.

Through her involvement with CJP in her 20s, Sarah — now a mother of two — developed an even stronger sense of belonging to the Jewish community and a deeper commitment to CJP.

“It’s been so meaningful for me to be involved with CJP through various stages of my life,” says Sarah. “CJP was part of my life when I was a teenager going to Israel with my mom, when I was a young adult in Boston looking to meet new people, and it’s now part of my life as a mom with a Jewish husband, guiding my Jewish family. There’s always this sense that CJP has been there for me, no matter what.”

A shared love of Jewish life and CJP

Now, Sarah and her husband, Brandon, invest in CJP, belong to a synagogue, and send their daughter, Shoshannah, to a Jewish preschool. They’re excited to continue deepening their ties to CJP and the Jewish community as their children grow.

“I am so proud that Sarah is instilling a strong sense of Jewish life and pride in her own family,” says Debbie. “She’s always felt that being Jewish is important.”

And coming full circle, Sarah and her family live around the corner from her parents in Needham so Debbie can continue to pass along her love of Jewish community, leadership, and tradition — this time to Shoshannah and her younger brother, Ezra.

“It’s unique and very fortunate we are able to share these Jewish experiences — and CJP — together,” says Debbie. “We have a deeper bond as mother and daughter, and as a family. It’s very special. We’re lucky to have CJP in our lives.”