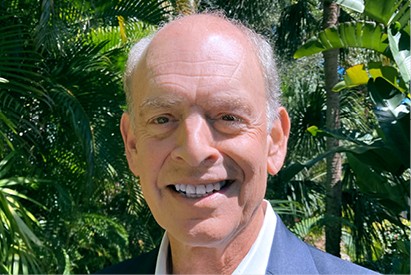 Terry Garfinkle grew up with parents and grandparents who taught him about the importance of Jewish life and philanthropy, inspiring him to get involved as an adult in the Jewish community on the North Shore. But it took a mission to Argentina and Uruguay to help Terry truly understand all the ways that CJP invests in – and supports – Greater Boston’s Jewish community. Read on to learn more about Terry and how he’s now making an impact through CJP’s Antisemitism Task Force.

When Terry Garfinkle and his wife, Jill, moved to Swampscott in 1982, they found Jewish community and a way to connect philanthropically through the Jewish Federation of the North Shore (JFNS).

Over the years, Terry got involved in Marblehead’s Cohen Hillel Academy (now the Epstein Hillel School) – eventually serving as its President. He saw firsthand how federation funding was a “lifeline” for the school but beyond that, didn’t have a full grasp of all the ways that JFNS – and after the merger, CJP – bolstered the Jewish community.

That all changed in 2019 when Terry and Jill traveled to Argentina and Uruguay on a CJP mission. The trip was filled with education and fresh perspectives and experiences for the couple as well as new realizations about the global Jewish community. There was a moment during Shabbat services in a small community hall in Buenos Aires that left a lasting impact on Terry.

“Even though we were thousands of miles from Boston, with people we didn’t really know and who spoke an entirely different language, we all felt like we were home,” he says. “We were all chanting the same prayers in the same melodies. It was an incredibly moving moment. It’s not easy to describe, but everyone felt it.”

The mission, Terry says, helped him develop “an appreciation for the breadth of CJP and what it does.”

“I began to truly understand how extensive the tentacles of CJP were, not just locally but regionally, nationally, and internationally,” he says. “It was eye opening and emotional to see CJP’s expansive array of work.”

That realization coincided with Terry’s retirement as a practicing physician, surgeon, and chief medical officer – and with the extra space in his schedule, he decided the time was right to deepen his involvement with CJP.  Although he and Jill moved to downtown Boston in 2015, the couple stepped into the role of co-hosts of the North Shore Anchor Series, a small group opportunity for donors to learn more about CJP. Terry also joined the Safety and Security working group of CJP’s recently formed Fighting Antisemitism Task Force.

“I’ve always felt that since World War II, American Jewry has developed a false sense of security and cultural acceptance,” Terry says. “It’s becoming increasingly clear that under the thin veneer of our American society still lurks significant racism and antisemitism. So, we need to be more proactive and shine a light on antisemitism to effect change. I’m not in a position to move mountains, but I am in a position to start shining flashlights on what’s going on and help in some way.”

Wanting to help comes naturally to Terry. He grew up with grandparents who modeled the importance of Jewish philanthropy by investing heavily in the fledgling State of Israel and giving generously to ensure a vibrant American Jewish experience. Terry’s grandfather, Albert Joffe, founded numerous Orthodox synagogues including a shul and Jewish day school on Long Island so his 10 grandchildren would have a place to get a robust Jewish education.

“My grandfather was a survivor of the Russian pogroms in Ukraine,” Terry says. “He and my grandmother made it a priority to improve Jewish life in America and ensure a strong Jewish homeland. That was his raison d'être. I was very close to them – and that involvement and those very vivid memories have been integrated into my own social DNA. Being involved with CJP allows me to continue their legacy and to have a broad impact on the community.”

Although he’s now involved with the task force, Terry says that he feels deeply connected to CJP’s overall mission to help those in need, mobilize the community, and repair the world.

“Knowing there’s a well-run infrastructure that’s helping to coordinate and support all of our local Jewish organizations – as well as provide for Jewish needs outside of our community – is important to me,” he says. “CJP facilitates the success of so many incredible organizations doing wonderful things. It really is the backbone of our Jewish community. And if we each contribute in some way – large or small – I think the world will be a better place.”