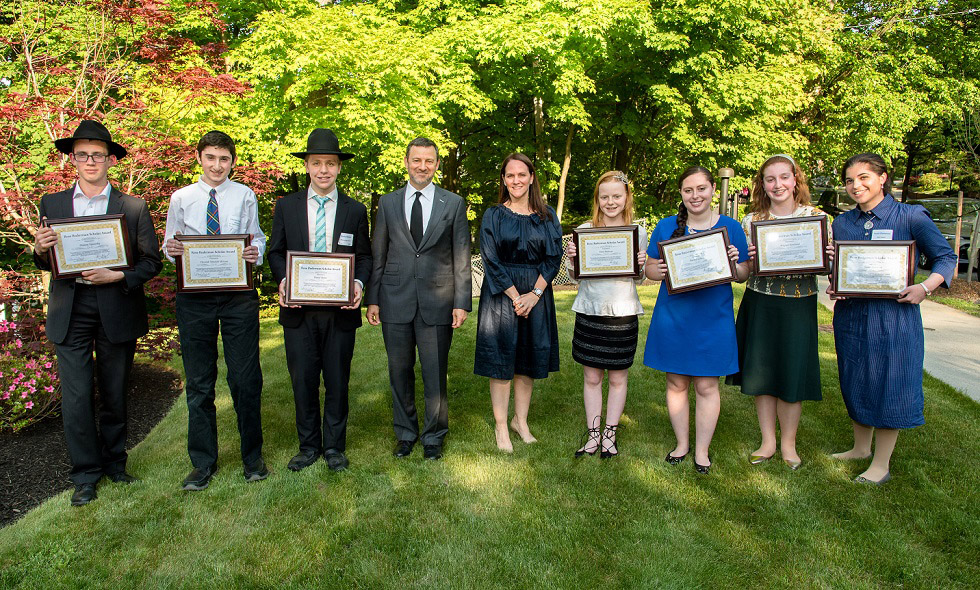 As a parent, watching your child receive an award simply based on the kind of person they are may be highest form of nachas (pride) you can hope for. The recipients of this year’s Rose Ruderman Scholars Award were not recognized based on their academic achievements, leadership skills, or athletic prowess. They just had to be good people.

Celebrating its 10th anniversary, the Rose Ruderman Scholars Award honors seven remarkable students each year from the Greater Boston area’s Orthodox Jewish day schools. Along with CJP’s Initiative for Day School Excellence, the Ruderman Family Foundation established the $1,000 scholarship to be used toward their education in memory of Rose Ruderman, who deeply valued her Jewish faith, family, and helping others in her community.

A legacy of kindness

The impact of Rose Ruderman’s legacy is continued by her children, grandchildren, and the growing number of students in the Greater Boston Jewish community who are living and breathing examples of Rose’s kindness.

“This award recognizes what is really important in life: being a kind person, a respectful person, and having a strong desire to go above and beyond to help others,” says Rose’s granddaughter, Sharon Shapiro, who hosted the award ceremony with her husband, Rony, in their Brookline home.

When the Ruderman Family Foundation established the award, they recognized the significance of honoring young people. “Rose’s grandchildren understood how important it was to bring her legacy into schools, so people don’t forget how vital it is to care for your community,” says Alan Oliff, CJP’s director of Special Programs. “Rose and the entire Ruderman Family and Foundation are models of these values and are now passing them onto a new generation in Greater Boston’s Orthodox Jewish day schools. These students not only personify these values, but now have a responsibility to share them with their community.”

And this responsibility is shaping the future of the Jewish community for the better. According to Rabbi Tsvi Levin, Principal of Bais Yaakov of Boston, “To begin developing the mindset that success is not just how much I can accomplish or how much I can get, but more importantly, it’s about how much I can give and how much I can do for others — that’s a powerful foundation for their future as adults.”

The award recipients include students in the highest grade level of their school, ranging from sixth to 12th grade, who embody the principals of caring, inclusion, and service that would make Rose Ruderman proud.

Sarah Hamoui (Bais Yaakov of Boston) spends her time offering emotional support and guidance to peers in need, is President of Student Council, and has made it her goal to help every girl at school feel a sense of belonging.

Racheli Cohen (Maimonides School) is a leader at the Maimonides Soup Kitchen where she is devoted to helping elderly Jewish community members who are in need. Through her hard work and determination, Racheli was able to find support and resources to keep the soup kitchen open when it was on the brink of closing.

Daniel Hefter (Mesivta High School) is not only a dedicated and model student, but he is known to go out of his way — with a smile on his face — to lend a hand or help anyone in need.

Yitzchak Yehudah Mitzner (New England Hebrew Academy) is an exceptional young man whose high academic achievements are only surpassed by his refined character and selfless acts of kindness. When not in school, Yitzchak facilitates support for people from out of state who are visiting loved ones in local hospitals.

Eden Rackover (Striar Hebrew Academy of Sharon) has a beautiful neshama (spirit) of giving. In addition to bringing new initiatives to her student body, Eden raises tzedakah (charitable giving) for various causes, and she collects and delivers food to Family Table.

Avigayil Krochmal (Torah Academy) comes from a family whose name is synonymous with community activism. Her leadership qualities and caring nature have promoted unity in class projects, as she views even the smallest tasks as a lofty assignment in pursuit of a greater goal.

Shimon Yanovsky (Yeshiva Ohr Yisrael) is a community leader at both school and at his shul, where he spearheads fundraising events and brings enthusiasm into everything he does. Shimon completed the Friendship Circle Bike Tour, a Jewish organization for children with special needs, and he is readily available with words of encouragement for younger students.

Continuing the tradition of service

During the celebration, the Shapiro’s house was filled with not only current award recipients, their family, and educators, but also past honorees. “I was moved to see how my grandmother’s values of being kind and giving back to the community have impacted so many award recipients over the past 10 years,” says Sharon.  “I know these students will carry on Rose’s values and, by doing so, make a positive difference in the world.”

Past recipients have gone on to display these values well after their time as Jewish day school students ended. After graduating high school, 2011 award recipient Miriam Yanovsky wanted to incorporate kindness into her career. She was inspired to become a nurse and is now helping patients every day. Evette Ronner, a 2013 award recipient, entered Harvard University knowing she wanted to get involved with community service projects. During her sophomore year, she founded a chapter of Camp Kesem, a free summer camp for kids whose parents have cancer.

Longtime CJP President, Barry Shrage, who later this summer will be transitioning to his new role as Professor of the Practice in the Hornstein Jewish Professional Leadership Program at Brandeis University, equated the caring and compassion of these students with a quest to uphold social justice.

“The scholars are committed to the assertion that injustice is not acceptable,” Barry said at the ceremony. “It’s not acceptable to G-d, to the Torah, to the Jewish community. Just as the Ruderman Family Foundation works toward inclusion and fighting injustice in the world, these students are taking action with their deeds of kindness, compassion, and consideration. They are taking Rose’s values and expanding them across the community.”

Whether the motivation is to combat injustice, feed the elderly, make everyone feel included, or simply lend a helping hand, one thing is certain: The students receiving the Rose Ruderman Scholars Award are making their community and the world a better place for others. And their parents must be very proud.

The 2019 Rose Ruderman Scholarship recipients will be announced and celebrated in June.
Share