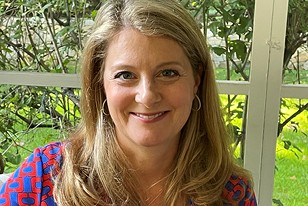 When her three teenage children were small, Erica Abate Recht found herself craving a deeper connection to the Jewish community and opportunities to get involved. She had just decided to leave her full-time law practice and back then, her young family did not belong to a synagogue.

So, when she found CJP and was asked to serve as Co-chair of the Families with Young Children committee, Erica said yes — jumping into volunteerism.

More than a decade later, her passion for giving back to CJP and her community is still going strong.

“I think it’s important to say yes when asked,” says Erica. “I feel lucky to have the ability to give of my time to CJP for something greater than just myself and my family and to make a greater impact on our community and our world. I hope my efforts as a volunteer will be a small part of that. I also want to be a role model for my kids so that they see that community involvement is important and worthy of their time.”

Erica says she’s drawn to CJP because it’s a connector and convenor of many different Jewish interests and organizations throughout Greater Boston.

“CJP has the ability to respond broadly to something happening in the community, yet it is also nimble enough to impact smaller groups of people,” she says. “I like the breadth of the organization but also its ability to focus on particular issues that are timely and worthy of attention.”

For Erica, antisemitism is at the top of her list of important issues. With her daughter, Lily, 18, heading off to college next year, Erica is especially focused on her work with CJP’s Fighting Antisemitism and Anti-Zionism Task Force.

“The rise of antisemitism during our adult life is concerning and deserves our attention,” Erica says. “The world that Lily will be entering beyond us is somewhat disturbing. If she encounters antisemitism on a college campus, I want to give her the tools to feel comfortable in those spaces. Our work on the task force is a start. There’s still much to be done, and the more voices that join the effort, the better.”

Over the years, giving back and getting involved through Women’s Philanthropy has been a priority for Erica, who’s part of the WP Lion of Judah giving society.

“WP has introduced me to some of my closest friends,” she says. “I love how it brings like-minded women together with shared values and a common desire to do better. I also feel it’s important for women to have agency over their own financial decisions. For a woman to decide that she wants to support CJP through WP is empowering for the individual as well as for the community.”

Beyond CJP, Erica is on the Board of Camp Young Judaea and has served as both Vice President of Development at her synagogue, Temple Beth Elohim in Wellesley, and Co-president of the Wellesley Education Foundation. Now, she spends much of her time doing pro bono legal work around voter protection and voter rights.

With everything she does to better the community — and the world — Erica says she’s deeply committed to giving of her time and philanthropy to CJP.

“I trust CJP to use my resources effectively. I appreciate the work that CJP does, and I want to continue to support CJP,” she says. “I can’t imagine what our Greater Boston Jewish philanthropic community would be without CJP. It’s up to all of us to continue to provide our resources and our time to help it continue to thrive.”