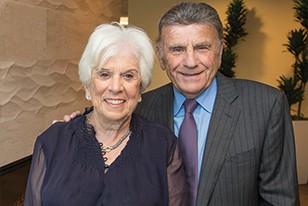 As they considered how to make a lasting impact through their philanthropy, Deanna and Sid Wolk had two priorities: They wanted to partner with CJP, and they wanted to help those in the community who were struggling.

For the Wolks, an investment in mental health was the answer. Recently, the couple made a $2.3 million lead gift to power the continued expansion of CJP’s Mental Health Initiative, a new project to improve access to care for Greater Boston’s Jewish community and destigmatize mental health concerns. CJP is the first Jewish Federation in the country to convene community organizations via a collective impact model to focus on mental health.

“Mental health is a real challenge — and the pandemic exacerbated it,” says Deanna. “We both wanted to do something in an area that was underserved and turn it into something meaningful. We feel good working with CJP because of their expertise and all the different resources they have available. We know CJP can put together a coalition of partners to make real, deep change. There’s just such a need out there.”

The importance of giving back is something that both Deanna and Sid, who have been married for 59 years, learned at an early age. A Peabody native, Deanna remembers her father — a leather worker who was deeply involved in their local Orthodox synagogue — regularly buying Israel Bonds. The son of Russian immigrants, Sid says he always put his loose change in the Jewish National Fund box the family kept in their Dorchester home.

“My father was a union plumber and if they had work, it was great. Otherwise, things were tight,” says Sid. “But my parents said you always had to give back to those who are less fortunate than you are. That was a requisite. That giving — the importance of it and the good it does — permeated both Deanna’s family and my own.”

As they began to give back together as a couple, CJP was a natural choice for the Wolks’ philanthropy.

“With CJP, we know that when they see a need, they follow through and make sure that no effort is spared in achieving their lofty goals,” says Deanna. “CJP does so many wonderful things, both here and in Israel; it’s just very gratifying to be associated with the organization. We loved working with CJP’s former President, Barry Shrage, and now Rabbi Marc Baker is leading the charge for a new era.”

It’s been important to Deanna and Sid to pass their values of tzedakah (charity) and Jewish involvement onto the next generation. Their three children, Howard, Jeffrey, and Robin — and their spouses — all invest in CJP and have served in leadership roles throughout the community. The Wolks’ eight grandchildren are following in the same footsteps, asking for donations to nonprofits in lieu of birthday gifts and getting involved in service projects around poverty.

“We’re so, so proud of our family,” says Sid. “We learned from our parents, and we’re so lucky that now, we’re learning from our children. They all feel a strong allegiance to Judaism and a strong desire to help people overcome adversity. It’s such a cause of joy for us.”