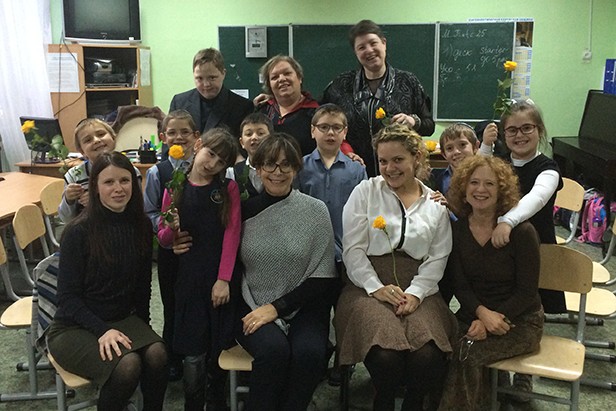 While Ukraine is often in the news these days, CJP and the JCRC have been partnering there to revitalize and support the Jewish community in Dnepropetrovsk (Dnep) since 1992.

After returning from her most recent trip to Dnep, we sat down with Ann Levin, current chair of the JCRC’s Dnepropetrovsk Kehillah Project, to get her take on the current challenges and the near-miraculous transformation of the Jewish community there.

CJP: How did you originally get involved with the Dnepropetrovsk Kehillah Project?

Ann: I first traveled to Dnep on a CJP mission in 2010. I was the incoming president of CJP Women’s Philanthropy and was anxious to understand what Dnep was all about because it was such a signature project at CJP/JCRC and in the Boston Jewish community. I came home really amazed at all we had done to help develop a Jewish infrastructure and at the widespread impact we had in the Dnep community at large. Moreover, I was moved seeing people in Dnep, who had every reason not to be Jewish, wanting to be Jewish.

That experience infused me with a commitment to be intentional about my Judaism. I saw another diaspora community with very different pressures, and how incredibly alive and jubilant they were about their Judaism. It made me want to learn more and stay attached to the project.

CJP: Tell us about the transformation that you’ve seen happen in Dnep.

Ann: If you go back 22 years or so, right after the fall of the Soviet Union, as far as a Jewish community was concerned, there was simply nothing. People had little to no Jewish identity, other than that the word “Jew” was stamped on their passport. So there were none of the Jewish institutions that we take for granted. In a city that had 42 synagogues before World War II and communism, there was not even one operating synagogue.

The transformation started by recognizing that it was okay to be Jewish. Thousands of people understood they had some Jewish family history even though they were not allowed to openly practice it under communism. So the past decades have been about reclaiming historical memory that was stolen from the Jews. And about building the foundations of a robust Jewish community with services and institutions that create the fabric of Jewish life, including a beautiful synagogue. We take pride in having been a catalyst for several of those important communal building blocks.

CJP: How does the support of Boston’s Jewish community impact medical care in Dnep?

Ann: At the start of the project, Boston professional and lay leadership saw the opportunity to make a significant difference on a macro level. We started with some ground breaking medical interventions, including the establishment of a pediatric clinic and a women’s clinic which introduced new concepts of preventive health care, childhood vaccines, routine pap smears, and mammography. Thanks to funding from CJP and the generosity of private philanthropists, we have provided technical expertise, medical exchanges and donated ultrasound and mammography equipment. Our contributions have saved countless lives across the entire city.

CJP: How have the needs changed since the recent political unrest began?

Ann: The medical system is being tested in unforeseen ways; in the normal course of care they were not used to seeing extreme war zone casualties. The doctors in Dnep recognized that they had deficiencies in the system, and because of the relationships that we had built, reached out to us for help. A trauma surgeon from Beth Israel Deaconess Medical Center joined us on this November trip and was able to assess the entire emergency structure and to identify protocols that will help save lives.

There is infrastructure in Dnep, but the system works very differently. There are doctors, and hospitals, and anesthesia – you’re not setting up a MASH tent—but they know they are decades behind current Western medical standards. So they’re very appreciative and you can implement change quickly. It’s ‘one plus one equals three’ right before your eyes. That’s what is so inspiring. You can make changes that will save lives right away. Boston volunteers and professionals can bring what they know how to do, teach another person and in the process impact so many. And this is true across all our projects.

CJP: You’ve gotten so much out of participating in the Dnepropetrovsk Kehillah Project. How can others get involved?

Ann: The incredible legacy of volunteerism has been the engine that drives the project. There are lots of opportunities to volunteer, with or without travel. We need new people to continue our amazing programs and to foster new ideas to help us advance meaningful initiatives. Really what you need to get involved is a passion to learn about the world outside of Boston, an interest in learning about global Jewry, and a readiness to open yourself to be inspired. And the food and vodka are tasty too.

CJP: Is there a project in Dnep that you’re most proud of?

Ann: That’s really hard!  It’s like asking me to pick my favorite child!

What they say in Dnep is that it’s not an individual program per se, it’s that we keep coming back. We’re there in the good times and in the bad. Things are really tough right now, and we keep traveling, we keep coming back for more, and we keep coming with new ideas. This includes staff and volunteers at our partner agencies as well: Jewish Big Brother Big Sister, Jewish Family & Children’s Service, Jewish Vocational Services, Jewish Community Housing for the Elderly, Hebrew College, Action for Post-Soviet Jewry and Oranim College and Gordon College in Haifa.

The Dnep community looks to us and we continue to inspire them with our bigger vision, rosh gadol, our sense of responsibility for leadership and initiative. That’s what I find most rewarding and what nurtures my Jewish soul.