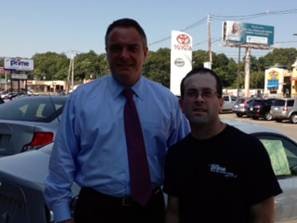 Mike is thrilled to have Isaac Varon as part of his team. Isaac is responsible for keeping the 18 month old dealership looking like new inside and outside. As Isaac finishes one task, he is planning on how to execute another. Mike reports that Isaac exceeds all of his expectations and is a model employee. Mike admires Isaac’s commitment and dedication. Despite his 1.5 hour commute, Isaac is on time and always ready to work.  Mike sums it up by saying, “everyone loves Isaac-he is like the mayor.”

Isaac loves his job and his colleagues. He is happy his co-workers treat him as part of the team and with respect. Isaac’s favorite task is taking the old tires from the service shop to the recycling center. Isaac has turned down using a cart to assist his effort. He prefers to think of it as his daily workout. Isaac has even earned points as a salesman since his Stepdad recently bought a car from Prime.  Prior to joining Prime Motor Group, Isaac graduated from Needham High School, Lesley University Threshold Program with a focus in Business, and Transitions to Work.