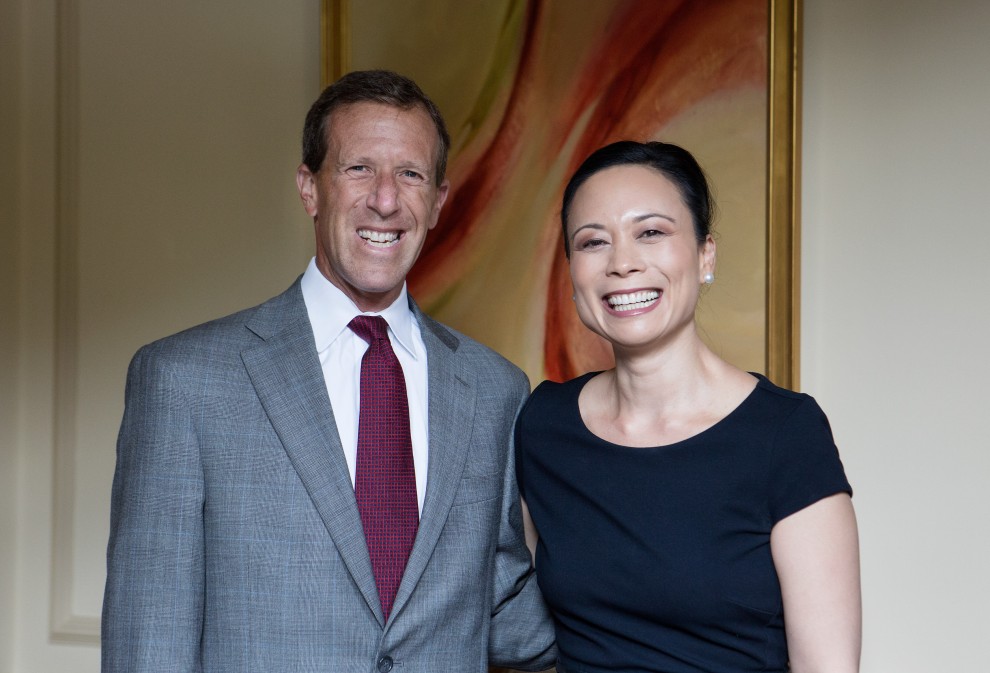 We recently spoke with 2017 Annual Campaign Chairs, Geraldine Acuña-Sunshine and Darren Black to hear their thoughts on the upcoming year, and why they invest their time, leadership and philanthropy with CJP.

Geraldine, you are serving for a second consecutive year as Annual Campaign Chair, while Darren is moving into the role for the first time. What motivated each of you to take on this leadership position?

Geraldine:
There are so many ways to serve our Jewish community.  But in this arena of service, CJP has occupied a particularly unique role for the past 120 years - that of effective convener for our many Jewish voices and interests, financial supporter for our community's greatest needs, and programmatic innovator whose initiatives are dedicated to strengthening the Jewish people.  I joyfully accepted to serve as CJP Campaign Co-chair because I am honored to play even a small part in promoting these worthy and personally rewarding endeavors.  And to be able to do it two years in a row is double the joy in sharing whatever I can of my talents, skills, and efforts to support our community.

I’ve been involved with CJP for more than 15 years, and have served in many different roles. Neil Wallack [currently chair of CJP’s Board of Directors] asked me to consider co-chairing the Annual Campaign at about mile 12 of a 20 mile run while we were training for a marathon, so it was hard to say ‘no’ to him! I have a tremendous amount of respect for the leadership at CJP--not a day goes by that I’m not grateful for Barry Shrage’s presence in our community. So I am really honored and happy to be able to take on this role, and to work with Geraldine, who is absolutely remarkable. She brings such boundless energy, tremendous ruauch and sense of purpose to her role.

Is there one area of CJP’s work that is most meaningful to you?

CJP's work to support Jewish learning and to strengthen Jewish identity through missions has been most meaningful to me. CJP's missions to Israel and to other parts of the diaspora have allowed me and my fellow travelers to learn more about who we are as part of the larger Jewish people, while CJP's programs to support Torah study have allowed us to more deeply explore our Jewish selves, our values and what matters most.

I chaired the Social Justice and Caring Committee for a number of years; I really do love the social justice and caring agenda. I think CJP does a tremendous amount of work with other constituent agencies and they’ve been very innovative. With CJP, funding is more than just giving dollars--they truly give of resources and of knowledge; CJP is thinking about how those dollars can be used to influence the agenda of an organization. I was also involved in reviewing the funding allocation process.​ Those have been some of the most meaningful opportunities because the caring and social justice agenda speaks to helping those so much less fortunate. My family and I feel so lucky that we’ve been able to be a part of this community, and we recognize all the good fortune that’s come our way. If we can now help provide for a better, stronger community, one that is more caring and more focused on social justice, that’s all for the better.

How did you first get involved with CJP?

I honestly had no idea what CJP was when I attended my first CJP event over 15 years ago.  My husband Gabe and I, who were newly married, were invited to attend a Ben-Gurion Society event in someone's apartment on Commonwealth Avenue in the Back Bay. It was packed, and we were entertained by a really funny, young Jewish comedian.  I just remembered it being such a great night of camaraderie and humor.  I think laughing about life is such a big part of being Jewish. On my list, it's right up there with challah and matzo ball soup.

My wife was just finishing graduate school; we’d just gotten engaged, we didn’t have kids yet. She had her friends from business school, I had my friends from college and from growing up, but we wanted to make ‘couples’ friends. So we connected with CJP’s Young Couples Group. My wife volunteered to organize havarah groups, and we hosted Shabbat dinners. We had people over for dinner that we’d never met before. They were all committed to tikkun olam and social justice, they were all committed to giving of themselves and to the greater Jewish community. Those friendships were pretty remarkable and many of them remain close friends to this day.

Can you tell me about an “a-ha” moment you’ve had, one where you realized that what CJP does is important to you?

I think a major "a-ha" moment happened when, in 2013, a deadly typhoon hit my hometown in the Philippines.  8,000 people had died. So many were displaced. I had flown back immediately to do relief work when I received a call from Barry Shrage. Together we helped coordinate the Jewish response to this horrific natural disaster with the American Jewish Joint Distribution Committee and the Israel Trauma Coalition (who were also working in conjunction with IsrAID and the IDF Humanitarian division).  Moreover, CJP donated $25,000 to relief efforts.  Never was I so moved by CJP's assistance and so proud to be Jewish than at that moment; I was witnessing a true and authentic expression of tikkun olam and gemillut chasadim - of repairing the world and of genuine loving kindness.

I was a member of the Acharai class a few years ago where we went Poland and then to Israel. It was an important reminder of the history of the Jewish people and our need to support the Jews in the diaspora, and to support the Jews in Israel. Jon Sandler and Myra Kraft (z’l ) were the Acharai co-chairs at that time, and they were really inspirational in terms of helping me understand that I want to be in a position to give back.

For 120 years, this Boston Federation has taken its charge to take care of the Boston Jewish community very seriously; we do it with compassion and integrity, based on our Jewish values of Torah, avodah, and gemillut chasadim. And I think we at CJP have been very fortunate to have stewards who care about generating the greatest impact on Jewish life with the resources that have been entrusted to us by the community. Moreover, because we are allocating communal funds, we believe that transparency is extremely important. For this reason, we post a list of the entities we fund and other important financial data on our website.

I think we are different, and that matters a lot. First, it’s all about credibility. Transparency and the trust is really important. CJP is asking donors to give money, and then to partner with us to determine priorities. We’re more than just a pass-through organization; we compile the best of lay leadership and professional leadership, and then we drive a common agenda and orient partner organizations toward supporting those priorities so that we are a single, strong Boston community.

Geraldine, how does your experience with last year’s Campaign affect your outlook and approach this year?

We had a very successful campaign last year, so clearly people believe in what we are doing and the impact of our work.  The question is how do we strategically move our campaign forward to create even greater impact on what we want to achieve based on our Jewish values? How do we help more people who are the most vulnerable in our cities? How do we generate a greater connection to Israel? How do we root more young adults in the pride and love for their Jewish identities? How do we increase participation in the campaign so that more people become true stakeholders in all that we are trying to achieve? All of these efforts require vision and money.  It also requires effective communication skills. So I approach this new campaign year eagerly, but with an eye toward helping the CJP staff and board find true answers to these real concerns.

Darren, what do you hope we can achieve through the Annual Campaign in the year ahead?

I hope that we will inspire donors through the act of giving, but also that we will inspire them to get involved. That involvement might be going to an Israel event, or hearing a new speaker, or engaging in some form of social justice or sending their kids to Jewish day school.

If we do all this stuff right, we’ll continue to evolve and shift our priorities. We’ll be a stronger community for it and that’s something we can be really proud of.