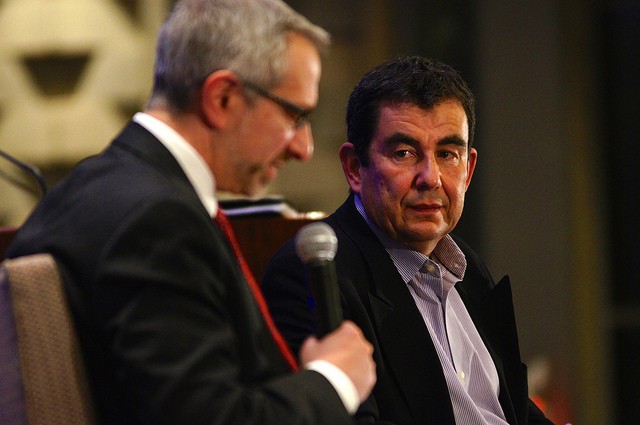 “The engineers who developed the Iron Dome system should be given Nobel Peace Prizes,” said Ari Shavit, author of My Promised Land: The Triumph and Tragedy of Israel to a packed audience of more than 800 people at Congregation Mishkan Tefila in Chesnut Hill.

The lecture was sponsored by CJP’s Israel Advocacy program, which seeks to inform and educate the public about Israel while offering opportunities for pro-Israel activism.

Shavit’s My Promised Land has become essential reading for those who care about Israel and the Middle East, including prime ministers and presidents. On this night, however, the author focused on the just-concluded Operation Protective Edge and how this summer all Israelis were within range of Hamas’ rockets.

By intercepting hundreds of rockets, Shavit says that Iron Dome prevented hundreds of deaths and averted millions of dollars’ worth of damage to homes, offices and schools. Israel didn’t have to re-occupy Gaza or engage in a lengthy war to reduce the threat that Hamas poses to Israel. In effect, Iron Dome not only protected Israelis, it protected the inhabitants of Gaza from the greater impact of full-scale Israeli military incursion and its aftermath.

Yet, Shavit emphasized, this is the third such asymmetrical war with Hamas; with no clear resolution, it’s unlikely to be the last.

Shavit described a summer that tested all Israelis. Holocaust survivors huddled in reinforced shelters alongside crying children. Warning sirens were incessant. The idea of Tel Aviv as a modern, thriving city immune to these skirmishes was challenged by Hamas’ ever-improving arsenal of rockets and missiles that flew more than 100 kilometers from the Gaza Strip.

Shavit’s vision of a Middle East in turmoil presented the audience with much to consider, and left all in attendance with a better understanding of the challenges Israel faces.

Watch Shavit’s entire presentation, plus a Q&A. You can also learn more about CJP’s Israel Advocacy.