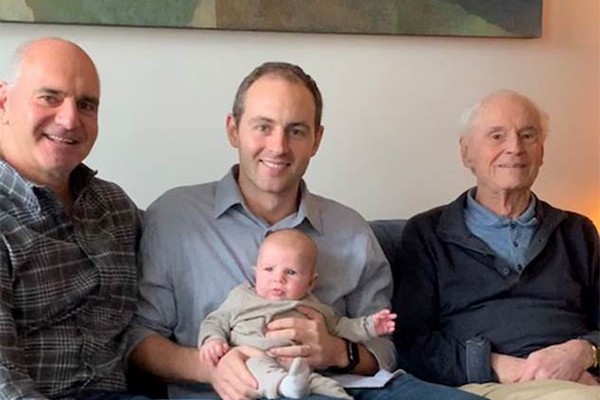 In the 1940s, a businessman from Brockton named Dewey David Stone began working behind the scenes to help fulfill the dream of a Jewish homeland. Dewey was a quiet hero who used his personal connections and philanthropy to help establish the State of Israel. He also led the operation in the United States to acquire boats, including the “Exodus,” to bring Holocaust survivors into Palestine, and was instrumental in creating Israel’s Weizmann Institute of Science to lay the foundation for the new country’s scientific prominence.

More than 70 years later, Dewey’s name lives on — thanks to the generosity of his family, the Teplows. In 2011, the Teplows endowed and named CJP’s leadership training program for young adults as the Dewey Stone Kadimah Leadership Development Program in his honor. Through Kadimah (“forward” in Hebrew), participants develop leadership skills; learn about CJP’s mission, vision, and priorities; build community with other young adults; and allocate grants to CJP partner organizations.

Over the years, more than 200 young adults have participated in Kadimah — including Dewey’s great-great-nephew, Nathan Teplow. Recent Kadimah graduates have gone on to chair programs and events at CJP; sit on CJP committees, task forces, and working groups; and be elected to CJP’s Board of Directors and boards at other leading nonprofits. They also attend and lead international and domestic mission trips and invest philanthropically in CJP and the broader community through giving societies.

Dewey’s nephew, Ted Teplow, great-nephew David Teplow, and Nathan all remain active in Boston’s Jewish community. We had the chance to chat with the Teplows about their endowment and what inspired them to focus their philanthropy with CJP on Dewey’s legacy of leadership.

You have an incredible family history. When did you first understand the significance of Dewey’s tremendous leadership role in the creation of the State of Israel? How did this influence you as you were growing up/coming of age in the Jewish community?

Nathan: To be quite honest, I think I’m still understanding it. I’ve grown up hearing many stories of “Uncle Dewey,” but they take on new meaning as you get older and when you hear them from others outside of your family. One of the things I’ve learned from stories of Dewey is that it’s not about what you earn or make or accomplish, it’s about what you give back to others. It’s about more than just giving resources, it’s about how you spend your time, attention, and effort. Dewey exemplified those values of giving in everything he did.

To this day, we continue to discover new examples of him helping Jews escape during the Holocaust and supporting the formation of Israel. The impact he had was really quite amazing, yet it was done in a way that was so quiet and humble that it’s taken nearly 75 years for us to discover.

Why did your family turn to CJP as a partner for Kadimah?

David: CJP provides a means to harness Jewish values and Jewish philanthropy to make the wider Boston community — and global communities in Israel, Ukraine, and in other parts of the world — better places. We wanted to be part of bettering the world, and we knew we could help by working with CJP to develop leaders who could help us shape a positive future.

Nathan, tell us about your own experience with Kadimah. How did it shape you? What do you hope participants — current and future — get out of the program?

Nathan: I loved Kadimah. It was my first real exposure to CJP as an organization and it helped me understand what it means to give back, how to invest in the community, and how there are many ways to be a leader. It also helped me reflect on what causes I care about, what it means to be Jewish, and how I personally can make an impact. Leadership and philanthropy are certainly a journey — and I know it’s just the start for me — but Kadimah really helped me begin exploring what’s important to me. Oh — and it’s a chance to meet great people. I loved the people in my program and hope we’ll get the chance to spend some time together (in person) soon! I would encourage every young adult to participate. It’s truly never too early or too late to develop yourself as a leader, learn about what it means to be Jewish, and give back to the community. It’s a great program that you’ll take a lot away from.

David, why was it important to your family to endow the Kadimah program and ensure that the community has access to these leadership resources for years to come?

David: Good leaders have always been needed, going back to biblical times and beyond. Good leaders are needed now, and good leaders will be needed for generations and generations to come. So, for our family, endowing the Kadimah program in perpetuity with CJP was a statement that strong leadership is important to our family and is crucial to assuring a thriving and impactful Boston Jewish community into the future. It also allowed us to name the program for our beloved Uncle Dewey Stone, who was the perfect example of how great leadership can truly make our community and our world a better place. We’ve loved having the chance to meet the participants each year and, thereby, renewing our optimism about the future of the Boston Jewish community. When our own Nathan (whose middle name is Dewey, by the way) participated in Kadimah, you can imagine how excited and proud we were to see that our family’s dedication to leading the Boston Jewish community was continuing for a fourth generation!

Why is leadership — and developing the next generation of Jewish leaders in Boston — so important to your family?

Ted: Our Uncle Dewey was a shining example of the impact a caring and charismatic leader can have on a family, a community, a nation and, in fact, on the entire world through his extraordinary deeds in rescuing families in Europe from the spread of Nazism and in the very creation of the State of Israel. His example is well worth remembering and using as a model and an inspiration for today’s young adults to become tomorrow’s impactful leaders.

Nathan, we’d love your take on the same question. Why is leadership so important to you and your family?

As we turn the corner of the pandemic, why is strong leadership more critical than ever?

Ted: Leadership is not just about having the confidence and the courage to pave new roads, to propose new ideas, or to model new behaviors. Leadership — especially at a time like now — is about leading the way back into the light after the darkness has passed.

Nathan, congratulations on the recent birth of you son! What Jewish values do you hope to pass along to him that you learned from your grandfather, father, and great-great-uncle?

Nathan: Thank you — it’s been the most amazing experience! I’m so lucky to come from such a great family of role models and hope I can be the same for him.

When I asked my grandfather, Ted, for the one thing he wants our generation to know about Dewey, he said, “Dewey was all about love, generosity, and family.” Dewey lived his life by these three values — and I hope Max (my son) gets to experience those in abundance — and use them as core values to guide him throughout his life.