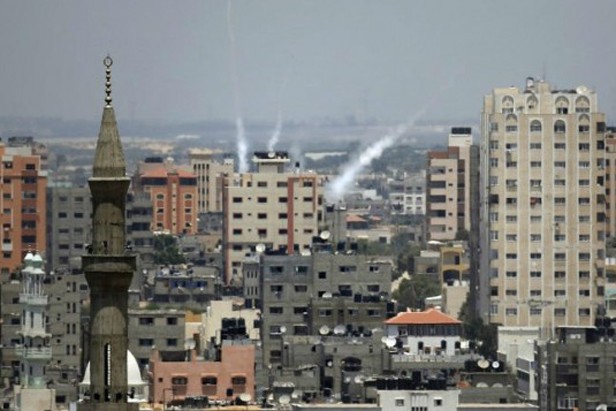 Many of you have asked about the current crisis in Israel resulting from the launching of rockets from Gaza by Hamas, the terrorist organization that rules over approximately 1.6 million residents of that area. Here are some FAQs, adapted from materials provided by the Israeli Consulate for the Mid-Atlantic Region, along with some talking points that we have prepared.

Israel has launched “Operation Protective Edge” in response to Hamas’ continued firing of rockets at civilian targets in Israel. What are Israel’s objectives for the operation?
Since 2006, more than 13,000 rockets have been launched at Israel from Gaza. More than 1,500 rockets have been fired at Israel within the last month alone. Israel’s goal is to restore normalcy to the lives of the millions of Israeli civilians in the south in particular, but throughout Israel. Hamas’ tactics of indiscriminate rocket fire and attacks on Israeli civilians cannot be tolerated and, in fact, are very likely war crimes in that they are launched from civilian areas, and deliberately target Israeli civilians. Even Palestinian diplomatic officials have recognized Hamas’ “human shield” strategy of placing its own civilians in harm’s way as a war crime. Operation Protective Edge is an operation of self-defense, intended to secure the safety of Israeli civilians by degrading Hamas’ ability to fire rockets, and by deterring Hamas’ leadership from engaging in this kind of activity in the future.

Who and what is Israel targeting in Gaza?
Israel has been targeting Hamas infrastructure and terrorists involved in the ongoing attacks. Homes of Hamas operatives, which are being used in Hamas’ operations and planning, are included among the IDF’s targets. The operation is strategic and measured. Israel gives multiple advance warnings to civilians in the area warning of coming attacks, through cellphone calls, dropping of leaflets, and other means. Civilian casualties are of course tragic, and every effort is made to minimize the potential for their occurrence.  It must be noted that Hamas’ cynical strategy of placing weapons in schools, hospitals and mosques, and of encouraging civilians to remain in targeted areas, is the cause of many such deaths.

What about the ground operation in Gaza?
On July 17, 2014, following Hamas’ continued firing of rockets at Israel, including firing of rockets during a humanitarian ceasefire that Israel had agreed to observe, Israel launched a ground operation in Gaza. The immediate precipitating factor, however, was the discovery, as it was happening, of more than a dozen Hamas terrorists emerging from a tunnel 250 meters inside the Israeli border.

The ground effort is aimed at crippling Hamas’ sophisticated network of tunnels that are used to store sophisticated weaponry, act as command bunkers for terror leadership, and that provide dangerous and threatening access to Israeli territory and citizens.

Why is Israel engaging with Hamas now?
Actually, Hamas chose to engage with Israel. Israel withdrew entirely from Gaza in 2005, but Hamas chose to open armed conflict through the use of rockets, terror tunnels, kidnappings and suicide bombers. Rockets launched from Gaza at Israel are nothing new. Hamas is motivated by a radical, extremist ideology. Their activities have escalated in the last month, since Hamas and Fatah signed a “reconciliation pact” aimed at forming a “unity government.”

The Hamas terror organization has escalated its attack on Israeli civilians launching hundreds of additional rockets, including 750 in the last 72 hours. Hundreds of rockets have been shot at the towns on Israel’s southern border, putting millions of Israelis at risk, and dozens more have been directed towards Tel Aviv, Jerusalem and Haifa. Thankfully, the Iron Dome anti-missile system has been extremely successful in destroying many of these incoming missiles. According to the IDF, 90% of rockets targeted by Iron Dome have been successful intercepted and destroyed.

When will Operation Protective Edge end?
The operation will end when Israel is able to ensure that its citizens will not be terrorized by Hamas. The operation will be considered successful if Hamas is no longer firing rockets at Israeli targets, and when Hamas’ weapons and tunnel network have been substantially degraded.

Is Gaza under siege?
Hamas has maintained effective control of the Gaza Strip and its people since Israel’s complete disengagement. Hamas has chosen a path of armed conflict with Israel--rockets, suicide attacks, terror tunnels and kidnappings--and has soured its relation with much of the world, and particularly with Egypt. Hamas repeatedly rebuffed Egypt’s attempts to broker a ceasefire during this conflict. (Israel accepted those ceasefire proposals.)

Despite Hamas’ intransigence and aggression, Israel has been facilitating the delivery of supplies, gas and food to Gaza via the Kerem Shalom crossing, even during periods in which Gaza militants were firing towards the crossing. Hundreds of trucks bearing supplies, fuel and other necessities have been flowing into Gaza on a humanitarian basis.

How does the operation influence the possibility of peace?
Hamas could have been a partner for peace if it had reformed itself. Instead it has escalated its utilization of terror. While more recently President Abbas of the Palestinian Authority has been critical of Hamas, Abbas should recognize that he has formed a pact with a terrorist organization that is antithetical to peace. The only hope for peace is for him to break those ties.

How is CJP responding to the situation?
CJP is deploying a variety of tools to convey important messages of support and clarification. We are aggressively communicating with our community and the wider world through strategic and frequent use of our social media tools, including Facebook, twitter, and MySababa.org. By creating original content and sharing the content of partner organizations and other sources, we are reaching tens of thousands of Facebook viewers, and hundreds of thousands of twitter followers.

We are working to place stories in the media describing the challenges faced by ordinary Israelis and by residents of our community as they cope with incessant air-raid sirens.

We work with community partners to organize rallies in support of Israel and are supporting other organizations in their efforts to mobilize pro-Israel individuals and groups.  Stay tuned for details on other opportunities to add your voice to those of other Israel supporters.

How can individuals help?
Educating oneself on the conflict and becoming active consumers of reliable news sources are important elements of lending a helping hand. Our CJP Israel Activism page on the CJP website lists a number of such sources, including the Jerusalem Post, Haaretz, YNet, the Times of Israel, Israel Hayom, and others.

As you become more educated and comfortable with the underlying facts and issues, it is also very important and helpful to identify and respond to media misrepresentations and distortions that place Israel in a false light.

Being active on social media as individuals in support of Israel is also extremely important, and can help spread the word to networks and individuals far beyond what we can do as an organization.

Other steps you can take: If you are active in an organization, company or synagogue that might be interested in content briefings on the conflict, let us know. We can help provide speakers and other accurate sources of information.

If you would like to write a letter to the editor of a local paper, let us know -- we can help you with content and messaging.

If you want to put pen to paper and draft an Op-Ed, let us know if you need content, statistics, or even another set of eyes.

Are there any talking points that might help me communicate clear messages?
Here are some that you might find helpful.

Where can I go for help, or if I have additional questions?
Contact the Israel Advocacy team at CJP. We’d be very happy to speak with you, to share resources, and otherwise to help explain things as we understand them.