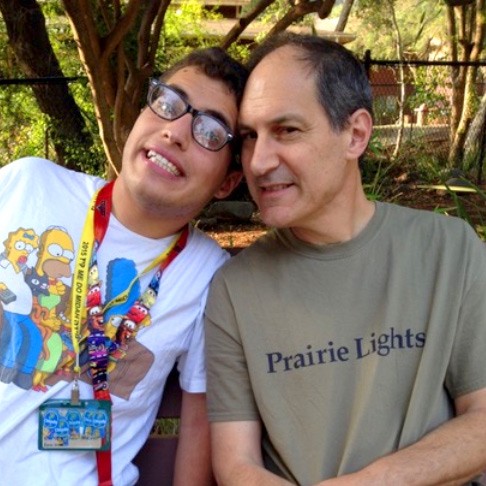 Inclusion within the Jewish community is a topic author Tom Fields-Meyer has been championing in the nearly two decades since his son’s autism diagnosis. As a former Senior Writer for People Magazine, Tom found his niche crafting human interest stories on public figures from Yitzhak Rabin to Pope John Paul II. Little did he know he’d soon be writing his own family’s story — a personal account of parenting and connecting with his son Ezra, who has autism.

We recently spoke with Tom about ways we can be more inclusive of people of all abilities and why, for us as Jews, inclusion matters.

What are some small, or even surprising ways for a community to be more inclusive?

When it comes to people with disabilities, some synagogues think in terms of programs or policies. “We’ll have a special needs Shabbat,” or “we’ll invite a guest speaker.” Those things can be helpful in raising awareness. But to me, being inclusive is both subtler and more pervasive. It’s about how you talk to people on the margins of your community. It’s about making a phone call to the child who doesn’t quite fit in. It’s about building communities where it’s just natural and intuitive for people to be inclusive. People talk about “tolerance” or “being accommodating.” But being inclusive means we’re all included — not that there’s a central core of “typical” people and we’ll also welcome people who aren’t like us.

Can you give an example of how your own community has excelled at being inclusive?

In my experience, the best model has been Camp Ramah in California, where Ezra has been a camper in the Tikvah program and is now on what’s called (coincidentally) Ezra Staff, a vocational program for young adults with developmental disabilities. He never went to a special camp. Tikvah is not only part of Ramah, it’s a central and integral part of the camp. The campers participate alongside typical campers to the best of their ability, and when they require support or accommodations, the camp provides those. There’s a buddy program, and every summer there’s a waiting list of typical campers who want to be buddies with the Tikvah campers. Best of all, at Ramah, typical kids are exposed to people like my son Ezra — whom they may not encounter at school or at home — and build relationships.

Back home in Los Angeles, I’m often out shopping with Ezra and we’ll be approached by a teenager or child who is very excited to see Ezra. Often, I’ve never seen these kids before. But they know him from camp. They have that connection, and it carries beyond camp into their lives and into his. That’s what being inclusive is. Not a special program, but real and deep relationships with people, even if they might seem different on the surface.

How can we change our thinking to not only be more inclusive — but to truly recognize the value and contributions that people of all abilities can add to a community or congregation?

Instead of thinking about disabilities or special needs, we can think of everyone as uniquely abled. Instead of seeing what people can’t do, take note of what they can do. In the autism world, we talk about a spectrum. Autism isn’t one thing. People with autism fall along a spectrum of abilities and disabilities. People talk about “high-functioning” and “low-functioning,” but those are meaningless terms, with no clinical definitions. Really, we’re all unique.  So, you can’t create a program that will accommodate all people with disabilities, but you can create a community that honors all people, where people recognize the essential humanity in other people.

Ezra participates in a program called ROSIES in Los Angeles that was started with a grant from the Jewish Federation. It’s a vocational program for young adults with developmental disabilities, where they develop skills that revolve around their unique strengths, abilities, and passions. Instead of plugging them into jobs, the idea is: let’s ask them what they want to do, what they dream about doing, what they would do if only they could? And then let’s create businesses around the skills and strengths of our participants. That’s a model for employment, but it’s also a model for synagogues and other communities. Instead of plugging people into programs, talk to them, listen to them, integrate them into the planning, and make a community that reflects and includes these people.

If Ezra were talking to congregations about community inclusiveness, what advice might he give?

Ezra has grown up going to shul almost every Shabbat of his life. His mother is a rabbi, his brothers went to day school, and our entire family is quite involved in the Jewish community. He is very much a part of the Jewish community, but in his own way. What’s great about a synagogue is that it’s a safe, communal space. So, someone like Ezra can comfortably wander and interact with people in the hallways, in the lobby, wherever he wants. I routinely run into friends or acquaintances who tell me, “I had great conversation with Ezra on Shabbat.” Creating and maintaining a space where those unplanned encounters can happen, where people are open to each other, is important.

Tom Fields-Meyer is author of the critically-acclaimed memoir, Following Ezra: What One Father Learned about Gumby, Otters, Autism, and Love from His Extraordinary Son and co-author with Dr. Barry Prizant of Uniquely Human: A Different Way of Seeing Autism.​ He will be speaking at the Ruderman Synagogue Inclusion Project’s Spring event on Tuesday, May 23, at Temple Emanuel in Newton. This event is free and space is still available. A cocktail reception will be at 6:30 p.m. with the program to follow. To register for this free event, visit cjp.org/CelebratingInclusion.