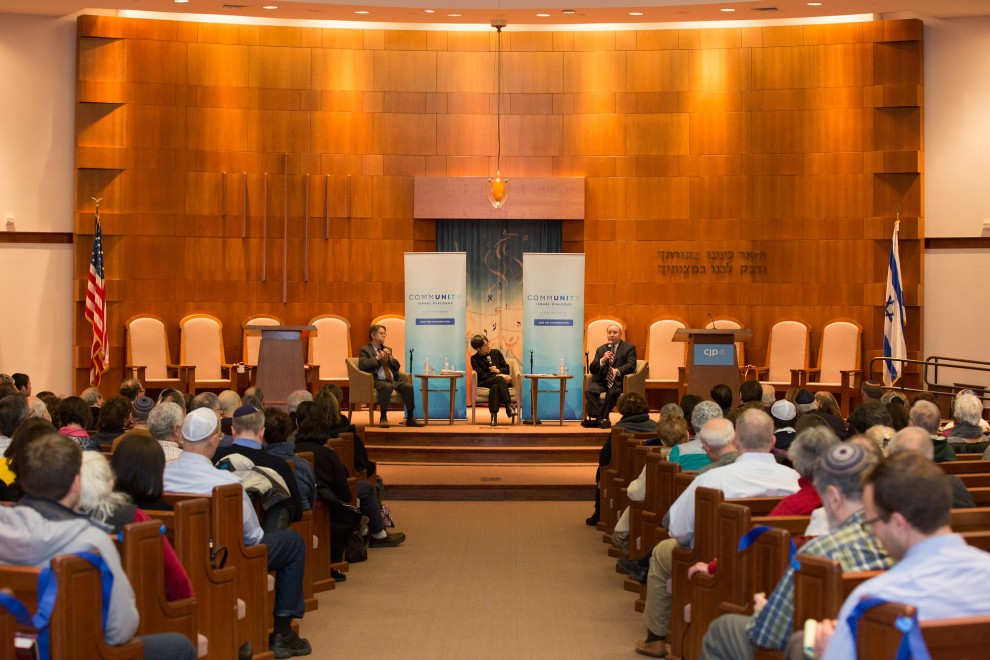 Columnists J.J. Goldberg and Jonathan Tobin have made distinguished careers out of expressing opinions on a wide variety of issues, and they are almost always on opposite sides of the political/ideological spectrum. Goldberg, a liberal, conversed with Tobin, a conservative, at an event earlier this month organized by CJP Strategic Israel Engagement’s CommUNITY Israel Dialogue and moderated by the newly appointed President of Hebrew College, Rabbi Sharon Anisfeld.

The ways they discussed their differences of opinions around Israel — from settlements to Israel-diaspora relations to the impending move of the U.S. embassy from Tel Aviv to Jerusalem — was an opportunity to demonstrate how two people can disagree without being disagreeable. In our current political environment, it is a rare and valuable skillset.

“Like in all American Jewish communities, Israel is often a central topic of discussion,” said Neil Wallack, CJP’s Board Chair and a founding member of the CommUNITY Israel Dialogue Task Force. “But in recent years, conversations about Israel have become louder, angrier, and more divisive. Some of us are turning away from engaging with each other about Israel — some of us are even turning away from engaging with Israel at all.”

Over 200 people, bringing their own diverse set of viewpoints, listened respectfully as the two took on issues that tend to raise our collective blood pressure — the Trump administration, the future of settlements in the West Bank, and religious pluralism in Israel to name a few.

“Both speakers share a deep sense of how important it is to have a conversation so that they can teach us how to have this conversation,” Anisfeld said.

Throughout the nearly two-hour structured debate with time limits and opportunities for rebuttals, Goldberg and Tobin remained focused on the topics at hand and never resorted to personal attacks, even as they countered the other’s arguments.  Neither told the other that they were lacking compassion, empathy, or understanding. But they did have a heated conversation in which each made persuasive arguments.

Most importantly, each one listened to the other, and each one respected each other’s (mostly divergent) opinions.

Listening with respect and compassion helps to overcome the media “bubble,” Tobin said, in which we choose to engage only with those who agree with us while vilifying those who don’t.

On this point, Goldberg and Tobin completely agreed.

“I have a deeper appreciation for [Tobin’s] sincerity and depth,” Goldberg said. “When you really listen to people, the first thing should not be the disagreement, but the love. Then you can speak about the issues.”