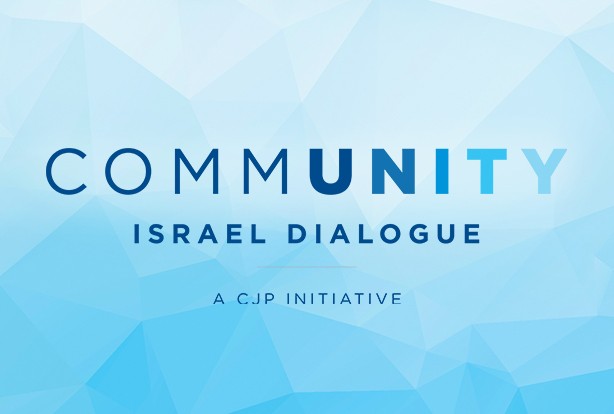 Judaism and the land of Israel are so closely intertwined that it can be impossible to think of one without the other. From the first book of the Torah, in which the covenant with Abraham promises a land “from the river of Egypt to the Euphrates,” to the descriptions in Exodus and the laws for living on the land in Leviticus, Israel is central to Judaism. And, Judaism is central to Israel.

It might surprise you to learn that in a survey of the Boston community, more than two thirds of rabbis, presidents, and other synagogue leaders expressed difficulty discussing the Jewish state. In these places, Jews are avoiding the topic of Israel in their own houses of worship. Israel has become a wedge where it should be a unifier.

To help bridge the divide that exists regarding Israel, CJP is working with Resettling the Table on an initiative called the CommUNITY Israel Dialogue to build the capacity of American Jews to talk, study, and deliberate together on Israel across differences in background and views. Instead of avoiding Israel discussions, organizational leaders learn how to have meaningful dialogues, allowing people with various views to come together in conversation.

One such workshop held this spring brought together rabbis, lay leaders, and senior staff at some of the region’s largest congregations for a full-day training on encouraging constructive dialogue.

“If we can’t talk amongst ourselves, it’s nearly impossible to build support for Israel,” said Melissa Weintraub, co-director of Resetting the Table, who led the session. “So long as mutual attack and dismissal on the one hand, avoidance of disagreement on the other, are perceived as the prevailing options for Israel engagement, many potential constituencies will remain untapped or out of reach. The people most likely to hear what we have to say will be those standing behind our respective megaphones, while too many others turn up the volume on their own megaphones or put their fingers in their ears and walk away.”

In a 2016 survey conducted by CJP, we found that 40 percent of synagogues refrained from organizing programs about Israel out of concern for causing conflict or controversy. Those results were consistent with a 2013 Jewish Council for Public Affairs poll of rabbis, in which 93 percent said they were very attached to Israel yet more than a third avoided discussing their personal views about Israel with their congregations.

With the workshop, attendees said they were beginning to gain the confidence to lead discussions about Israel without fear of their congregants or participants shutting down.

“I had the powerful experience of listening to someone with diametrically opposed political views from my own, and having him listen to me, in such a way that a new depth of conversation was opened up. That this could happen within about an hour of the group coming together is nothing short of miraculous,” said Rabbi Toba Spitzer of Congregation Dorshei Tzedek, a Reconstructionist synagogue in West Newton.

Noah Cheses, an Orthodox rabbi from Young Israel of Sharon, said he left the workshop with a plan to give a sermon on the need for civil discourse around Israel.

“It’s possible to teach people to be more responsible conversationalists,” he said. “It is possible to help people develop more self-awareness while in a conversation and to guide them to be in true dialogue.”