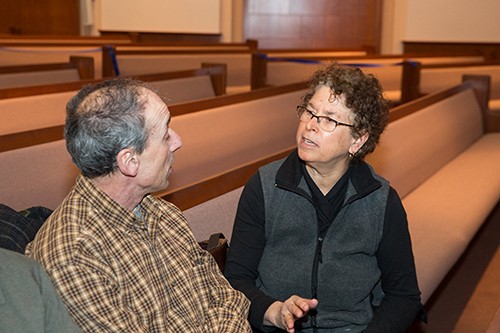 On April 9, Israel heads to the polls for its next election. While Israelis work to keep up with the emergence of new political parties and alliances, here in America we are watching with anticipation, curiosity, and often…anxiety. Israeli politics, much like our own American politics, bring about a mix of conflicting emotions. While we may feel strongly about particular points of view or political stances, we can be reluctant or anxious to share our views with family, friends, and the community around us.

There is no denying that speaking across difference, especially when it comes to our political beliefs, can feel scary. After all, these are the beliefs that propel us through each day and shape our world view. To be rejected for holding a view is a highly threatening prospect. Given this threat, we find ourselves with a choice: remain silent about what really matters to us or speak only to those we are certain will agree.

Facing this choice, I’m energized by the work of CJP’s CommUNITY Israel Dialogue. I have the privilege of observing programs held in synagogues and institutions throughout Greater Boston. I watch as Resetting the Table, a nationally recognized facilitation partner, demonstrates a third option in this dilemma, one that moves the conversation forward while keeping relationships intact.  Through workshops and coaching, Resetting the Table shares techniques for setting up a conversation, listening to another person, and speaking from a personal place. These techniques, while seemingly simple, cultivate a mutual understanding that doesn’t require agreement, but rather an acknowledgment of the humanity and reasoning behind another’s political stance.

Reflecting on the power of these techniques, I’m reminded of a remarkable encounter I witnessed between a father and his adult daughter in a synagogue on the North Shore. While close, the two had a clear understanding that politics, particularly Israeli politics, were a topic they could never tackle if they wanted to remain part of each other’s lives. In fact, to the best of their memory, they hadn’t broached this topic in nearly fifteen years, even though Israel was very close to both of their hearts. By chance, this duo was randomly assigned the same working group, where they spent three hours practicing the skills to restart a challenging conversation. As the day wrapped up, the daughter raised her hand to share with the group that for the first time in far too long, she and her father not only spoke about Israel, but agreed that each had the State’s best interest at heart, even if their politics were vastly different.

This type of conversation is rare on the public stage of politics, where persuasion and competition are the name of the game. But in our synagogues and at our dining room tables, there is an opportunity to be passionately invested in the politics of Israel while also being deeply committed to the people and relationships that make up our community, even when we disagree.