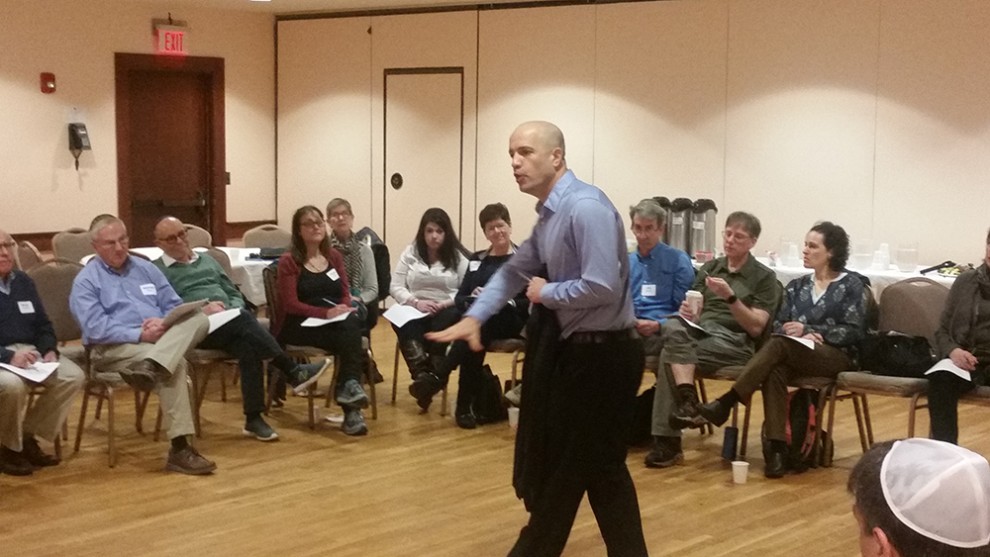 A few weeks before Passover, I and my fellow members of Newton’s Temple Emanuel received an invitation to participate in a program that would engage us in a fraught topic: how to talk about Israel. The past six months had been a difficult time for our congregation, as in others, and personally, I was finding navigating my beliefs and explaining them challenging. Only the first forty members who signed up would be accepted, so I quickly said yes and, like Nachshon, stepped forward on a mission of personal exploration and learning.

Resetting the Table, an organization based in Berkeley, California, would facilitate this conversation, as part of a grant from CJP’s CommUNITY Israel Dialogue.

From the moment I arrived at the temple conference room set aside for the Sunday morning endeavor, I felt a sense of respect and consideration pervading the room. The participants (which included some of our congregational and professional leaders) were a cross section of ages, from thirties to eighties. While I knew half of my fellow congregants well and the others not as much (I have been a member for more than thirty years, and we are blessed to have 1300+ families), I had the distinct feeling that all had come, as we began the first moments of the three-hour session listening and hearing, with an open mind. Indeed, we each had sought to be there, and understood we were present for a noble purpose.

The experience was amazing! The dynamic leader, Eyal Rabinovitch, one of the two founders/directors of Resetting the Table, was an animated and kind man who led us in a series of unique encounters that engaged different subsets of our group. We first spoke in small circles of what matters to us individually (being Jewish, family background, being heard, etc.), and then stepped out into the wider group to stand alone or together, depending on our individual beliefs, in response to suggested questions and spectrums of Israel/US politics. Then it was back into new, smaller groups again to refine our approaches and conclusions.

I learned a lot about myself and my beliefs by going through this process. For instance: how is it that I believe the things I do? Can I defend them? Would I consider that my opinion might change by another’s argument? Can I be moved to change or expand my opinion if I found out what I believe may not be correct?

As we came together towards the end of the session, there was a real sense of awe in the room. We all appreciated the value of what we had just encountered, both individually and together. We understood the power of what we had witnessed and expressed and accepted with kindness that we were now bound together in that special way that comes from being vulnerable and sharing our humanity.

Today, more than a month after these quick yet deep discussions, I am looking at the news with fresh eyes; hearing and reading the conversations with more patience and openness; accepting less and evaluating more. The experience of this session was extraordinarily poignant.

The power of face to face encounters revealed itself to be a life changing force that Sunday morning. I am grateful to all who participated in and facilitated this journey.