CJP and Jewish Vocational Service (JVS) share a successful track record as collaborators and innovators. JVS President and CEO Jerry Rubin is a key player in this partnership that empowers both organizations to support our community’s immediate needs, pilot new programs and bring them to scale to create long-term, systemic change. Together, and with your support, we’ve launched innovative programs that help people access stable jobs, and further their education and careers. From members of our local Jewish community to newly arrived immigrants from around the world, JVS and CJP help people achieve stability and create a community where everyone has opportunities to reach their potential.

Over the years, CJP and JVS have collaborated on programs like Transitions to Work, which prepares young adults who have disabilities for paid employment, the Anti-Poverty Initiative, and Together We Rise, our shared program that works with refugees to advance their careers. Can you describe how we’ve tackled large, systemic problems?

The partnership JVS has with CJP is different. In my experience, philanthropy is often transactional: A foundation or grantee will put out a request for proposals, and we’ll respond with a project that matches their intent. With CJP, it’s much more powerful and dynamic. Both organizations feel very comfortable bringing an idea and saying: “We think there’s a problem, and we think we have an opportunity to do something about it.”

Often, we’ll pilot something with philanthropic money, and if we prove that it works, we’ll expand it and lobby for public funding, so the model becomes sustainable. For example, Transitions to Work—that’s now 70% publicly funded.

Why do you think JVS and CJP work so well together?

At the core, both organizations are driven by Jewish values. I think we’re both pretty nimble and we have a culture of responding to change and seeing that as exciting—not as a burden.

For example, JVS has a long history in helping immigrants and refugees. Right now, almost no new refugees are being allowed into the country. We decided we could either cry in our soup, or we could do something that we’ve wanted to do for a long time, which is to focus on the thousands of refugees who are already here. Often, they get stuck at the bottom, with no way to advance their careers. So that’s where Together We Rise came from. I think the urgency of the refugee situation, coupled with CJP’s responsiveness and support from donors, allowed this to happen quickly.

From your perspective, how has CJP’s role as a community convener helped to address Jewish poverty?

Poverty in the Jewish community is especially problematic because often, we don’t acknowledge it. So, to CJP’s incredible credit, they were willing to address this issue. They recognized that, while the recession might be over, there are still thousands of people who are really struggling. For us, the Anti-Poverty Initiative has succeeded in a very meaningful and organic way by connecting the agencies in a way that’s never been done before. When you’re struggling, it’s hard enough to go to one organization—let alone multiple agencies—and CJP made the process easier. I think it’s made a big difference for our clients.

I think one of the most impressive parts of the Initiative was CJP’s desire to learn, adjust, and improve. Oftentimes funders or the government will roll out an initiative and five years later it looks exactly the same. But the Anti-Poverty Initiative has changed dramatically over time: how outreach is done, what services are provided, how they are provided—all that has been continuously improved.

How has JVS evolved during your leadership?

JVS is very committed to those we serve and we have to ensure our facilities can meet their needs. One of our most significant changes was our move to a new building in 2015. Winston Churchill once said, “We shape our buildings; thereafter they shape us.” We wanted to build an inspirational and aspirational space that gives every client confidence and hope. Everyone deserves to be fully respected and to have an opportunity to develop their talents and capabilities. CJP, by the way, was helpful in that process. They connected us to free architectural services for six months and introduced us to a committed volunteer who has served as Chair of our Real Estate Committee and as our Board Treasurer. And then CJP’s development team helped us with the capital campaign. We did a lot of this ourselves of course—it’s our responsibility. But there were several moments where our partnership with CJP was key—it’s about more than programming and raising money; it’s about connection. 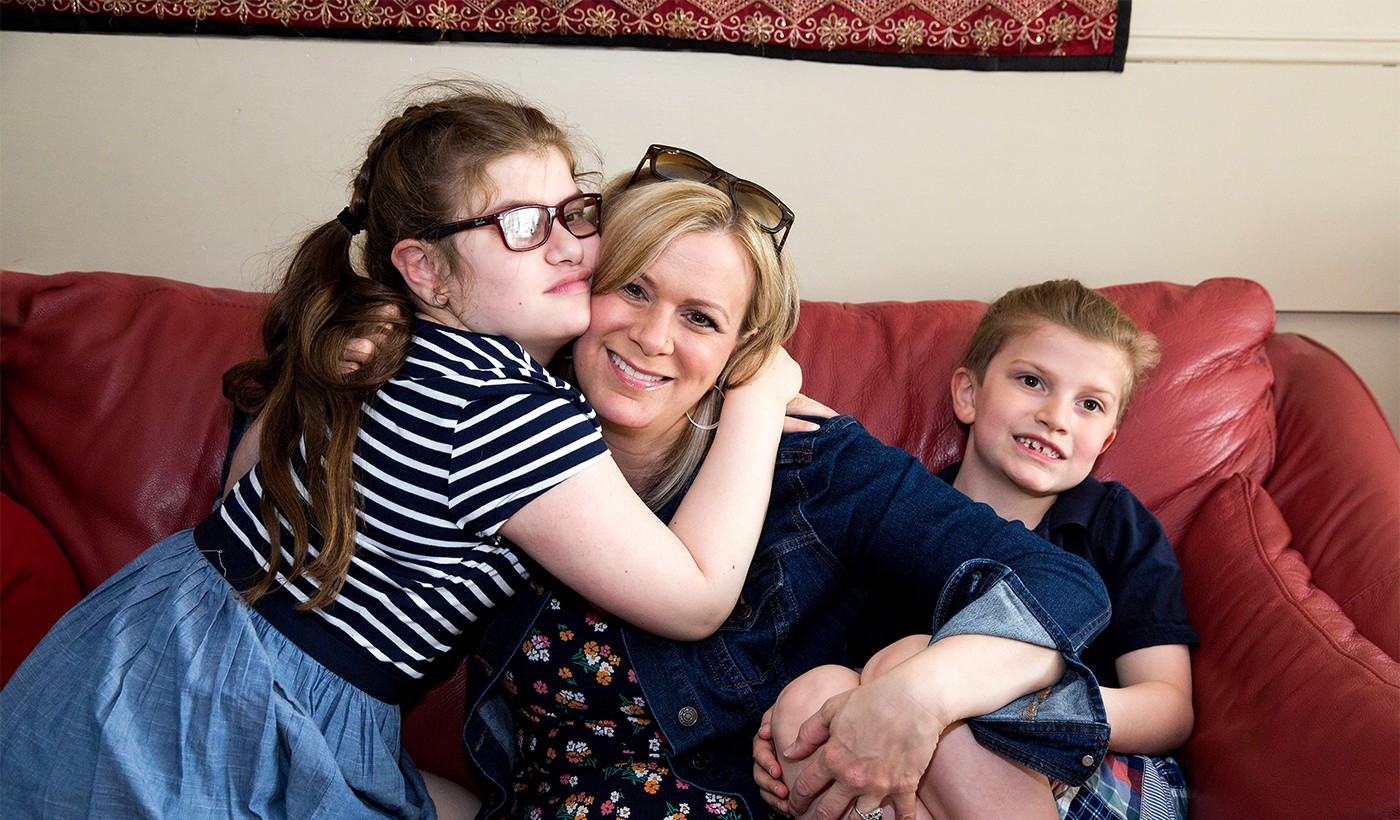 Finding a New Home in Boston

When Cara and her husband Joshua first moved their family from Florida to the Boston area to address their daughter’s medical needs, their primary concern was to find a home within 20 minutes of Boston’s Children’s Hospital. But they soon found that being surrounded by the Greater Boston Jewish community was equally indispensable.

As they began the process of settling in, a friend encouraged them to reach out to a CJP partner organization; that one call opened up an entire community of support that has changed their lives.

“CJP is a bridge between all the different organizations that are doing such amazing work. I’ve never seen anything like it before. The fact that they connect all these services is so important to help families like mine access their Jewish community,” says Cara.

Cara’s daughter, who is now 11, was born with a congenital heart disease, which was further complicated by a surgery that caused traumatic brain damage, visual impairment, and developmental delays. Cara and her husband also have two sons, ages 15 and 7, one of whom has autism. Their children’s needs range from extremely complex medical issues, to the very basic need for friendship and acceptance. They’ve found all of that in their Jewish community.

“I spoke with a social worker at JF&CS and with Gateways: Access to Jewish Education. They were like two encylopedias of what parents with special needs kids need to do,” remembers Cara. Through that initial contact, her family was connected to public benefits like MassHealth, as well as to CJP-supported education and mentor programs at Temple Emanuel, Gateways, and Jewish Big Brothers Big Sisters of Greater Boston.

In part because of the generosity of CJP donors, Cara says that Boston now feels like home. “It’s such a loving and accepting community, and a lot of it has to do with all of the programming that CJP is providing to help educate and support families.”