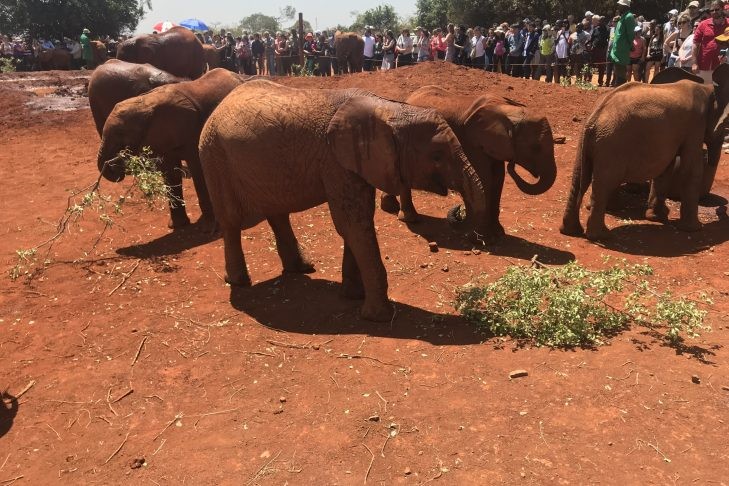 By: Erica Weinstein and Debbie Grossman

Shabbat Shalom from Nairobi! Friday night we joined the Nairobi Hebrew Congregation for services and dinner with the community. Some of us went to the traditional orthodox service and some of us joined the alternative egalitarian service. We prayed and dined with Jews from all over the world who have made Nairobi home. They welcomed us with open arms and it felt like a slice of home for us all.

When telling friends and family we were travelling to Kenya for a week, the most common response was "for safari?!" Today, we finally got the chance to experience Kenya as tourists! We started the day with a visit to the Africa Fund for Endangered Wildlife Giraffe Center. The center was founded in the 1970s by a British couple, Betty and Jock Leslie-Melville who discovered giraffes were seriously in danger here in Kenya. After an amazing presentation about the different types of giraffes in Kenya-- the Rothchild, Reticulated and Maasai-- we had the opportunity to feed them, kiss them and enjoy their company. They are truly massive figures and amazing creatures to see up close. We learned about Eddie, the dominant male of the tower (or family of giraffes) who has impregnated all of the current adult females in the center. Betty the beautiful 18-year-old giraffe is currently pregnant with her third baby (thanks Eddie). We learned that giraffes nurse until age one, and at three years old, the giraffes in the center are released into the wild and adapt to their new surroundings very quickly.

After visiting the giraffes, we were lucky enough to visit the David Sheldrick Wildlife Trust Elephant Orphanage. In a happy hurry the baby and young elephants ran to the water hole where handlers were ready to feed them their milk. The elephants played and fed and were a joy to watch and learn about. All of the elephants are at the sanctuary as a result of injury from falling into a well, or because they've been left alone after their mothers were poached. To see them use their trunks up close was fascinating. The trunk acts as a little hand scooping water and grabbing sticks to eat the leaves. Some of the elephants played in the mud and pushed each other like loving siblings. 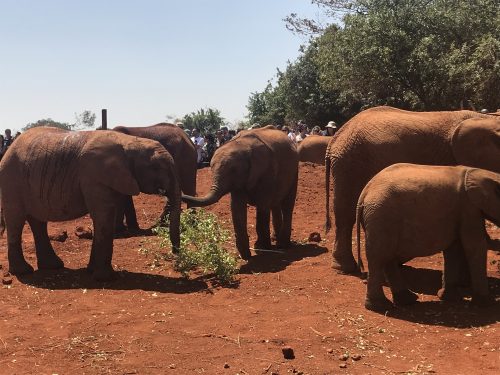 Safari time! Upon entering the Nairobi National Park, we immediately saw the land come to life. The park actually sits in the city of Nairobi but feels like a million miles away from the never-ending traffic and sea of people in the city center. To see the juxtaposition of the Nairobi skyline and the vast plains filled with animals in the same view was breathtaking. Some of our favorite sights included seeing packs of impalas, hippos cooling in the water, zebras up close and giraffes feeding on the tallest of trees. We saw several black rhinos, ostriches and even a crocodile. We also saw many skeletons – a reminder of the circle of life.

One of the first sights we saw was a commemorative tribute to the elephants and rhinos killed for their ivory and horns. The tribute is a pile of ash, the burnt remains of 105 tons of elephant ivory and 1.35 tons of rhino horn, from 6,500 elephants and 450 rhinos killed for their ivory. At the ivory burn, which took place in 2016, Kenyan President Uhuru Kenyatta said, “Ivory is worthless unless it is on our elephants.” 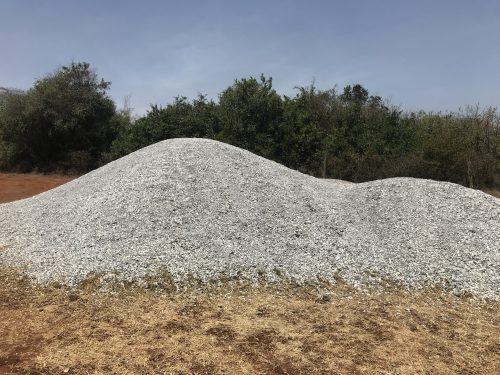 The most amazing sight of the day, though, was catching a glimpse of a lioness preying on an unassuming wildebeest. However, no kill was attempted because the lioness was too far away from the ever-fast wildebeest.

It was a relaxing and joyful day for us all-- a wonderful way to wind down our fast paced and exciting trip to Kenya. We are ever grateful for the opportunity to experience this country.

Shavua Tov to each and all, wherever you are reading this!