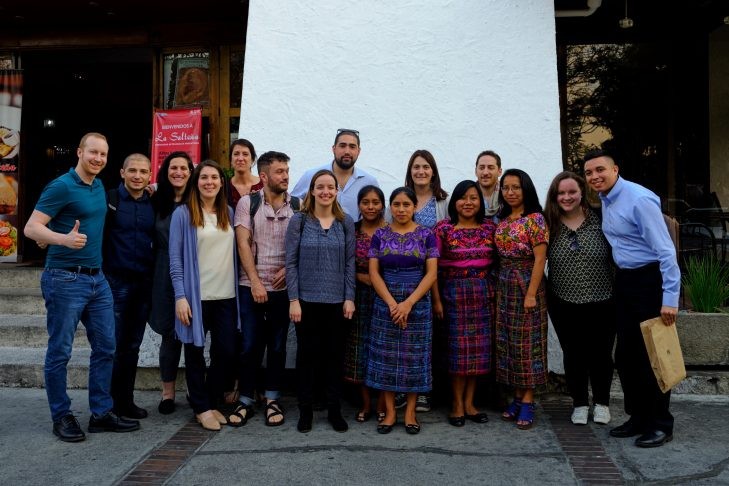 By: Olivia and Alex

Every day, hundreds of migrants arrive at the U.S.-Mexico border. The largest group hails from Guatemala, and includes many indigenous Mayan villagers fleeing severe hunger and drought in the country’s western highlands.

One such organization is MayaWorks, a social enterprise that produces high-quality handiwork and sells it overseas.

In fact, the Jewish market has been a key ingredient in MayaWorks’ success, driving over 70% of sales. In addition to hand-crocheted yarmulkes, the artisans also make hand-woven tallitot and intricate beaded mezzuzot. Proceeds fund educational scholarships for girls who would otherwise not attend school. (Only 39% of Mayan women are literate.)

The organization began in 1996, when a group of Americans visiting Guatemala encountered women weavers, who asked them to sell their products in the U.S. The Guatemalan Peace Accords had just been signed, ending a 36-year war waged against the Mayans by their own government and military. Many women had been widowed during the genocide and had no means to support their families. The Americans wanted to help.

A first-mover in the e-commerce space, MayaWorks soon established an online presence and a loyal following abroad. For two decades, MayaWorks has grown its business organically while sending dozens of young girls to school for the first time. Over the years, it has provided a stable source of income to many women and families, including survivors of domestic violence. Lately, the organization has been working to refine its marketing strategy to broaden its customer base.

As Americans visiting Guatemala this spring as part of CJP’s Project Inspire, we were privileged to meet with the leaders of this unique organization. Among the leaders are women whose schooling was funded by MayaWorks many years ago. After hearing about the growth of the organization, we were able to purchase some of their products. Olivia bought a white matzo cover, which she proudly displayed on her Passover table. Alex purchased several kippot, which he distributed to family and friends.

Intuitively, we know Jews stand for social justice and workers’ rights. As it is written in Deuteronomy 24:14: “You shall not abuse a needy and destitute laborer.” As Jews, we allocate an entire day per week for rest from labor, fulfilling this commandment from Deuteronomy 5:13-14: “Six days you shall labor and do all your work, but the seventh day is a sabbath of the LORD your God; you shall not do any work—you, your son or your daughter, your male or female slave, your ox or your ass, or any of your cattle, or the stranger in your settlements, so that your male and female slave may rest as you do.” In fact, a close reading of this excerpt reveals that Shabbat was actually created for the express purpose of giving slaves/workers an opportunity to rest like everyone else. Many of us can state this verse from memory: “Justice, justice you shall pursue!” (Deuteronomy 16:20).

But rarely do we consider the origin of the ritual objects—the kippot, the tallitot and the mezzuzot—that we use to get closer to God. Who made these items and under what working conditions? The rules for kashrus(kosher food) get a lot of attention in our tradition, but what about the purity of our ritual objects? Fair trade, we would argue, is a key component of that purity. Everything we use in our religious practice—food and ritual objects—should be directly aligned with our spiritual and religious values. Workers should be treated well and compensated fairly. By the same token, objects made under inadequate working conditions should be ruled impure—unsuitable for use in prayer and acts of reverence to God. Just as many Jewish communities have come together to create kosher labels for food products, we should also work to create a kosher manufacturing code that specifies standards for workers’ rights and environmental impact.

The majority of workers in the global garment industry are women, and too many are subjected to poor treatment and long hours with little pay. At MayaWorks, each tallit takes 16 hours to weave on a foot loom. Each kippahrequires five hours of crocheting. In exchange for that hard labor, MayaWorks artisans are provided with fair wages, microcredit loans, scholarships for their daughters and capacity-building workshops.

As Jews, we strive to combine our love for Torah with our obligation to pursue social justice. Purchasing fair trade ritual objects is a beautiful way to honor our tradition and our creator.