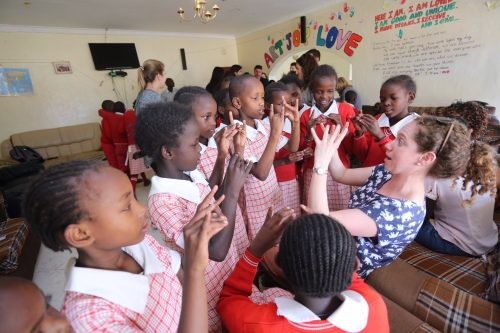 It’s officially Day 2 in Kenya! It’s hard to believe that we’ve been here for less than 48 hours as our packed itinerary and incredibly welcoming community of Kenyans has left us feeling as if we’ve been here a lifetime.

The #ProjectInspire crew left the hotel and were joined on the way by Esther (known as Hadassah) and her son, Jaguar, who quickly bonded with Debbie over a love of house music and the book, Wonder. Esther is a program manager for the St. Ann’s Baby and Children’s Home located in Nakuru County which was the focal point of our day today. As the concrete jungle of Kenya’s capital city faded in the rearview mirror, the buildings turned to wide open fields filled with goats, sheep, cows, donkeys, and to our surprise, monkeys and zebras! Our trusty driver, Sammy (who is reminiscent of the driver of the Knight Bus -- Harry Potter fans anyone?) navigated us up winding roads to a vista where we stopped to take in a breath-taking view of the Great Rift Valley (GRV). Make sure to check out the video blog featuring myself and Jasmine to get a panoramic view of what we saw.

A couple of fun facts about the GRV:

After another hour on the road, we arrived at St. Ann’s Baby and Children’s Home where we met with Irene Wainaina -- the director of the home. She shared with us the story of the inception of the home, the founding of a school for the 41 children in the home, as well as, the surrounding community, the stories of the children, and, probably most impressive, how the home is almost completely self-sustaining. The team at St. Ann’s grow crops, raise livestock, have an on-site school for the children at the home, as well as, the surrounding community. They also started a bakery across the street that bakes bread for the children and sells breads and pastries that brings an added income to the home. 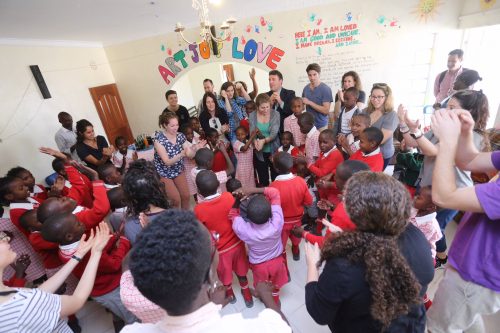 Irene founded the home ten years ago, with the intention that it would be a place for newborn children, often premature, who were either abandoned or orphaned. We learned about the hardships that newborn babies face if they do not have family that will claim them or if their family is unknown -- the hospitals and doctors can only prescribe medicine, but do not administer it if there is no one to pay for it, so more often than not, the babies will not survive. Since the founding of the orphanage, 12 of the babies have been adopted.

Following Irene’s warm welcome, we had the immense pleasure of meeting the 41 children who call St. Ann’s home. The children performed songs and poems in English, Swahili, and Hebrew, and then introduced themselves and offered lots of hugs and handshakes before it was time for them to be off to lunch with their fellow classmates across the yard at the schoolhouse. The moments we had to connect on-on-one with the kiddos really told the story of St. Ann’s -- they are loved and known.

In addition to the 41 children living at the home, we met 3 Israelis, Noa, Michal, and Galit, who have been volunteering for the last few weeks with the children and the full-time staff at St. Ann’s. Noa, Michal, and Galit came to St. Ann’s as a part of Art-Joy-Love, which is a volunteer program that places volunteers in orphanages in Kenya, Mozambique, and Uganda for as long as they’d like to be there. The initial partnership with Art-Joy-Love opened additional ways for Mashav and representatives from Israel via the Kenyan Israeli Embassy to make a larger impact for St. Ann’s including providing an irrigation system, seeds, chemicals, and training to successfully grow crops that provide food for the children as well as be sold to bring additional income to the home. 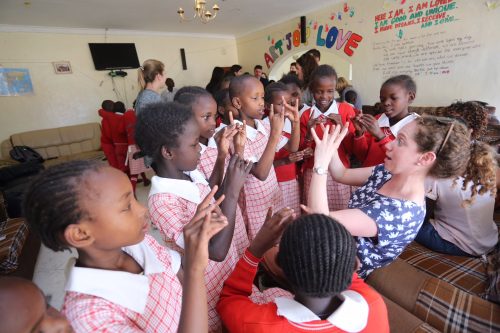 As I reflect on the last two days that we’ve been here, I think what’s stuck with me the most is that there is an assumption of what people need in developing nations or in lower-income communities at home or abroad. This was something I dealt with daily while working in education in Boston -- people constantly made assumptions about what kids of color or their families needed and what was offered was to them vs in partnership with them. While visiting St. Ann’s, Star of Hope and Mathare, one common theme bubbled to the surface -- it’s imperative that one asks how they can help and gives something that is needed to make the greatest impact quickly instead of assuming that you know best.

They are empowered; they are changemakers. They are getting shit done.

The people living their lives every single day know what they need, how you can help and where an impact can be made by being a partner -- all you need to do is ask and more importantly, listen. 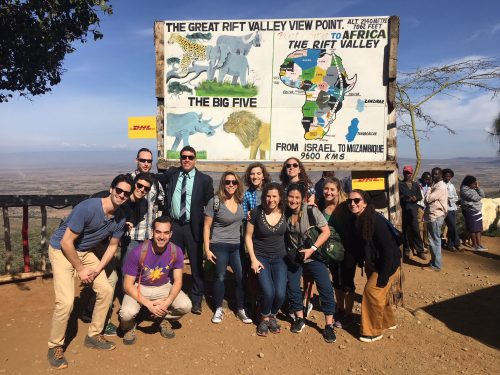