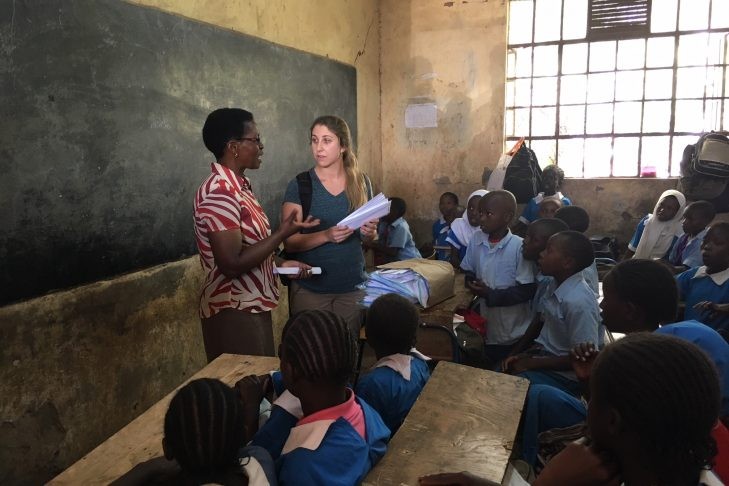 By: Debbie Grossman and Kim Kargman

Jambo from Nairobi! This morning at 8 a.m. sharp (i.e. midnight in Boston) we began our first full day with a short walk to the Israeli Embassy, where we met some key staff who are at the helm of prospering Israel and Kenya’s relationship. Our briefing was delivered by Gilad Milo, a former deputy ambassador-turned-celebrity musician, who walked us through a history of Israel’s role in the region. Gilad’s narrative is unique, as he is a second-generation diplomat in Kenya.

Gilad spent his childhood in Nairobi while his father served as the Israeli ambassador here. After completing his IDF service, he joined Israel’s foreign service and was deployed in Nairobi and Los Angeles, where he noted that “Hollywood is as rich as Kenya is poor,” altering his perspectives on the diplomat’s role. Despite its poverty, he was quick to tell us that Kenya is the world’s most smiley nation, a superlative any of us have yet to contest. The people here are extraordinarily friendly, warm and hospitable—core cultural traits that led Gilad to relocate and raise his own family here.

Gilad spent seven years working for Amiran, an agriculture distribution company, before finding success in pursuing his original passion, music. Trending on Kenya’s local Twitter is the hashtag #MakeGiladKenyan, a nod to his decision to apply for dual Israeli-Kenyan citizenship (he is still on the waitlist).

Next, we drove to Mathare Special Training Center, a vocational school for students with intellectual disabilities ages 12-45. In each of the classrooms we visited, the teachers’ love and compassion for their students was palpable, as was their commitment to teaching learners the skills they need to successfully enter the workforce. From woodworking to textiles, hair braiding to a new hatchery, we observed teachers adapt vocational curricula to meet the individual needs of their students and help make them productive and valued members of society. We spoke with Brigit, a Kenyan teacher who traveled to Israel to train with Mashav, Israel’s development aid agency. She accredited her Israeli training and the Mashav pedagogy for giving her perspectives on how to accept each student for who they are as fundamental to her practice. #Inspiring

Lunch brought us to Amiran Kenya, an Israeli-founded company of 300-plus employees that distributes Israeli agricultural products and technology. It also provides agronomic consulting to a range of small- to large-scale farmers who rely on Amiram to increase their efficiency and yield. We learned about innovations like the Farmer’s Kit, an all-in-one starter kit for small-scale farms, which includes a greenhouse, an acclaimed Netafim drip irrigation system and a Home Biogas system, which allows farmers to create their own methane cooking gas by composting organic waste. Fun fact: There are seven million farmers in Kenya, which is about one-eighth of the population. #FutureofAgriculture

After Amiran, we hopped back on the bus for a long drive to Lunga-Lunga, where we were greeted by 800 cheering primary-aged children at The Star of Hope school. They were gathered in the earthen courtyard to celebrate the arrival of the Israeli ambassador and honor his work for gifting a new toilet and computer learning center for the school. They performed a song and dance for us, and even stood to honor “Hatikvah” after signing the Kenyan national anthem.

As a school teacher, I (Debbie here) was most excited for this school visit. After seeing the Project Inspire itinerary, I was moved to create a pen-pal system between my fifth-graders at Belmont Day School and the fifth-graders at Star of Hope. Thanks to the Israeli embassy, this project came to fruition and I eagerly began educating my 35 students in Belmont about Nairobi and Star of Hope. Each of my students wrote two to three handwritten letters, each enclosed with a pencil, to Star of Hope students. We spoke with the students about our shared similarities: family, food, sports, instruments and hobbies, and also discussed environmental differences, like the weather.

Although the students at Star of Hope have access to far fewer resources, I maintained focus on ways to bridge similarities between our two classrooms. Today with letters in hand, I walked into their fifth-grade room, which was designed to accommodate 40 students but was home to over 100 students. I was overwhelmed with emotion as I explained to the students about the letters I had brought with me. The children were kind, curious and welcoming as I gave the letters to teacher Jessica. My students and I look forward to creating a lasting relationship so that students in both countries have the opportunity to learn beyond themselves and to connect with children like themselves in very different cultures. #BelmontDaytoStarofHope

We ended the day with a relaxing evening filled with shwarma, Israeli wine, simosas and a live jazz performance by the Israeli band The Betty Bears at the Safaricom International Jazz Festival. #AGoodTimeWasHadByAll

Debbie Grossman is a fifth-grade teacher at an independent school in Belmont, where she has worked for six years. She teaches math and science and coaches middle-school sports such as soccer, basketball and track. She graduated from Brown University and moved to San Francisco, where she began her career in real estate finance. One year later she found herself an apprenticeship as a teacher in the Bay Area and moved back to Boston in 2012 to earn her master’s in elementary education.

Kim Kargman serves as the statewide organizing manager at Planned Parenthood Advocacy Fund of Massachusetts, where she leads volunteer engagement in support of endorsed candidates and in support of a legislative agenda aimed at expanding, protecting and promoting access to reproductive health care and sexual health education. In her free time, Kim volunteers with Emerge Massachusetts, an organization that trains women to run for office.