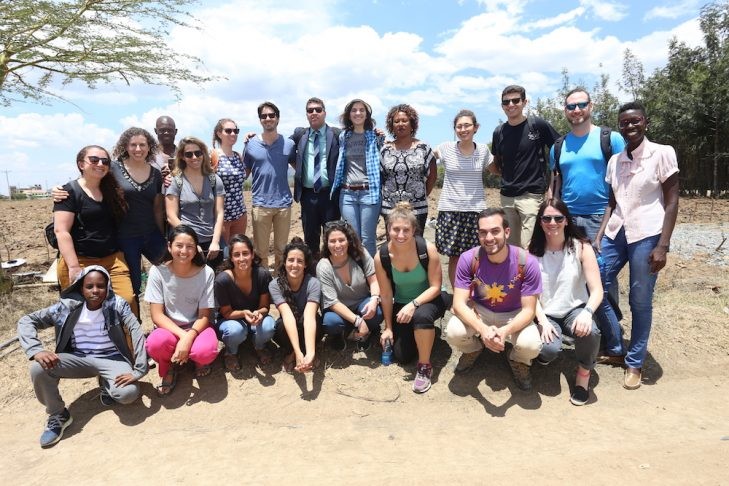 After returning in late February from Kenya, it was easy to get swept back into our “normal” lives. Months later, however, the 12 participants of the first Project Inspire trip continue to be inspired by the people we met and the successes they are achieving in their communities.

For some, the words of a particular individual from the trip serve as inspiration. For example, when the daunting adversity in Kenya caused Erica Weinstein to question how she “could even begin to make a difference abroad,” she recalled one member of the board of directors from St. Anne’s orphanage, who said: “If I help one child, one person, I’ve made a difference. If I feed one meal, clothe one person or provide just one dose of medicine, I’ve made a difference.” Today this lesson informs Erica’s deeply impactful work with the Anti-Defamation League here in the Boston area.

For others on the trip, particularly those working in the field of education, the children we met serve as reminders of the importance of their work. Debbie Grossman returned from the trip with a thick bundle of letters that Kenyan students had written to her fifth-graders in Belmont, who have since written back and eagerly await a reply. This partnership reminds Debbie that though her classroom and that of the young Kenyan correspondents are located worlds apart, the “end-all goal of teachers in both countries is the same: to foster childhood, to support growth, and to create worldly thinkers.”

And Debbie isn’t the only educator who continues to strengthen connections between her students and the students we met in Kenya. Staci Weber, an administrator at a Boston-area college, plans to raise money to send a couple of her undergraduate students to study in Kenya next winter break.

For many participants, sharing the overall purpose of our trip is widening the scope of conversation about Israel. For example, Scott Rosen says that when he describes the work that MASHAV, Israel’s international development agency, does in Kenya, a common response he hears is, “I didn’t know Israel does stuff like that!” Surprise is also the reaction I get when someone asks me about the pin on my backpack—intertwining Israeli-Kenyan flags—and I respond by telling them about how for many decades, Israel has been sponsoring Kenyan educators, farmers, entrepreneurs and more to come and deepen their knowledge in fields as diverse as agriculture, education and entrepreneurship.

Though the support from Israel undoubtedly plays a role in the success of the projects we visited, Jasmine Winship says that above all, she is inspired by how hard Kenyans are working to improve their own country, a sentiment echoed by many in the group. Ross Chanowski was so wowed by the passion and drive of the young agricultural entrepreneurs from Kenarava, several of whom studied for more than a year in Israel, that he now consults for them on partnerships within Kenya and beyond. He explains: “The beginnings of the work have been incredibly interesting, and I hope we’re able to continue improving and open up opportunities in Boston as well.”

And finally, one thing that we all carry with us is the positive energy and warmth of the local people we met in Kenya, who, as Rachel Kohn describes, motivate her “to be more conscious of her interactions with friends and strangers.”

With the incredible impact the first trip has already achieved and the second trip to Kenya departing this coming August, there is no doubt in my mind that Project Inspire will continue to empower, educate and connect people in Boston, Kenya, Israel and beyond.

Lauren Glaser is a Boston native who works in the field of environmental conservation. A passionate linguist, she recently spent three months in Israel to work toward her longtime goal to learn Hebrew. While in Israel, she started to learn about the headway Israel is making in the environmental sustainability sector, both domestically and abroad.