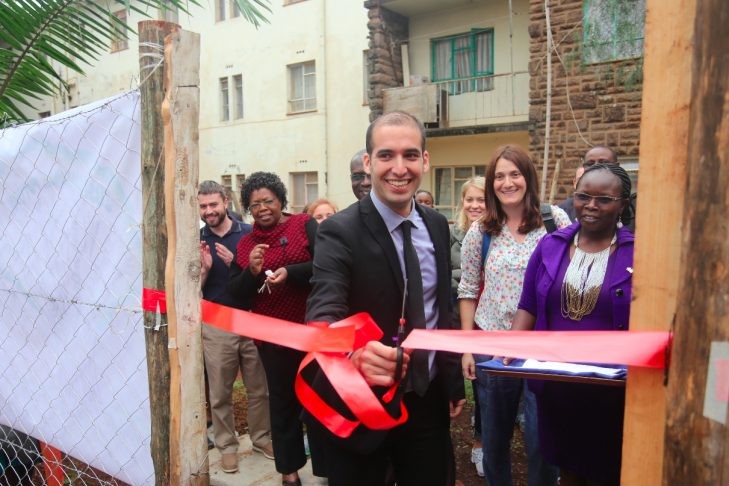 “Share knowledge,” Maureen instructed us, “because sharing is caring.” This is how Maureen, the MASHAV officer at the Israeli Embassy in Kenya, described Israel’s collaboration with Kenya.

Our first full day in Kenya started with a visit to the Israeli embassy. The first thing I noticed as we stepped inside was a large photo of Golda Meir, then Israel’s minister of foreign affairs, alongside Jomo Kenyatta, the founding father of Kenya. The photo captured the opening ceremony of the Israeli Embassy in Kenya in 1967.

We were greeted by Eyal David, the new deputy ambassador to Kenya, who deserves a special shehecheyanu shout-out, as today was his second day working at the embassy. He told us about the work of the embassy before drawing our attention to a poster-sized photo of Yonatan Netanyahu hanging on the back wall of the conference room. He briefly shared the story of the historic raid on Entebbe and took a moment to honor Yonatan, the late older brother of current Israeli prime minister Benyamin Netanyahu. It was both a nod to an Israeli hero and an example of the resilience of the Kenyan-Israel partnership. The visit wrapped up with a series of introductions with Israeli Embassy staff—Maureen, Wallace, Linda, Roxanna, Yara, Krystal, Rose, Jane and Koral.

Our next stop was the Rescue Dada Centre. For 20 years, the Centre has been helping girls living on the street by providing them with a safe place to live and the chance to return to their family. The Centre believes that children do best in a family setting and strives to reunite street girls with their families within 12 months. The Israeli Embassy has been a friend of Rescue Dada Centre for years, donating books and basic goods, and connecting the Centre to visiting Israeli physicians, performers and volunteers.

After learning about the work of Rescue Dada Centre, we went outside to greet the girls and were met with vibrant smiles. The embassy donated box loads of hula hoops to the Centre and on hearing the news, the students’ eyes lit up with excitement. This, of course, meant one thing. Hula. Hoop. PARTY! Together, we hula hooped, danced, sung and laughed. It was a privilege to be part of this special community—thank you, Dada Centre, for your warm welcome and spirit.

Some of KEMI’s educators get training from MASHAV, Israel’s agency for international development. Since Israel has overcome similar water, climate and agricultural obstacles, Israel and Kenya are uniquely positioned to partner on farming initiatives. A manifestation of this partnership was the KEMI Greenhouse, which was inaugurated today. The inauguration ceremony was led by Lawrence, who recently completed an Israeli training on agriculture. In the manner that a parent would dotingly share an update about their child, he walked us through the greenhouse and proudly described his plans to grow tomato plants.

It was a discussion that would particularly delight and excite the daughter of a farmer, and I immediately thought about my abba (father in Hebrew), an Israeli botanist who taught me the same techniques Lawrence was describing. Lawrence went on to tell us about the Israeli drip irrigation and bee pollination initiatives he’s implementing in the greenhouses. I was again reminded of my dad, who taught me and my brother about these same Israeli agricultural practices throughout our childhood.

To see these techniques coming into fruition in Nairobi was an “aha” moment that reinforced how Project Inspire, and Israel’s collaboration with Kenya, is something very special. Just as my abba has taught me about Israel’s innovative approaches to farming, Israelis have been training Kenyan farmers through KEMI, who then go into communities and spread their learnings. It’s only the end of our first full day in Kenya and I’m already seeing how Maureen’s summation rings true—share knowledge because sharing is caring.