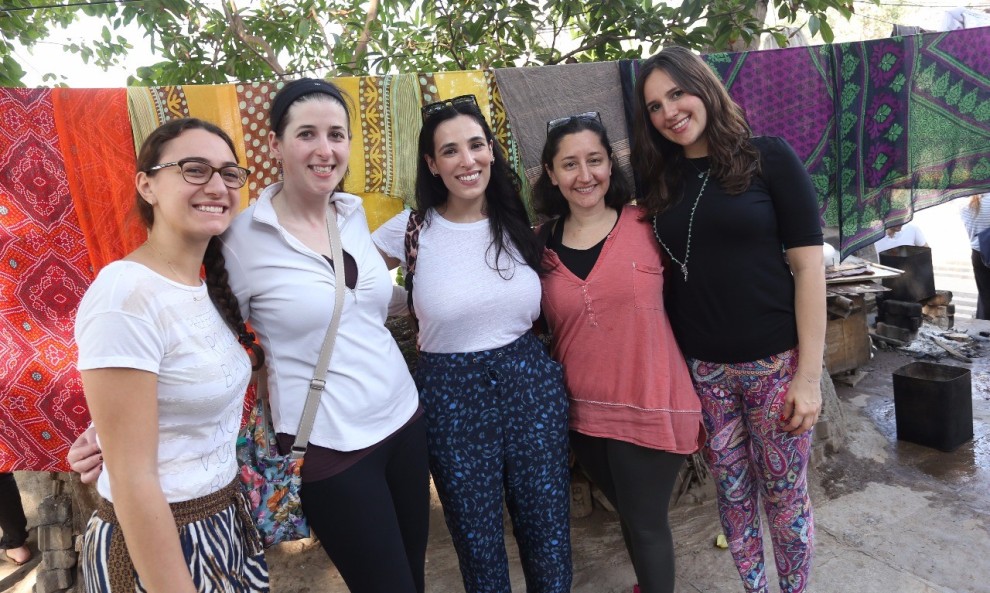 Because all the cars mooo-ved out of the way!

This joke came to mind in the Colaba district of Mumbai after seeing a lone cow walk calmly into incoming traffic. Images like this encapsulate many of the contrasting experiences that I’ve had in Mumbai.

Today was so full of different extreme emotions. Reflecting back on the highlights: I taught a little girl a Bollywood dance, enjoyed one of the best meals of my life and attended an extravagant 50-person Indian-Jewish wedding for people I’ve never met.

In the morning, we visited the Banganga neighborhood and had the opportunity to speak with a family who lived in a modest one-room home of 13 people. We asked them about their day-to-day life, aspirations and favorite foods. We also learned how the family makes a living in this impoverished area by hand-carving statues of Ganesh, the Hindu god of good luck and fortune. Even though their entire home was only 10×10 feet, they had dedicated a corner for prayer with statues of various Hindu gods. To see this holy prayer area, which was approximately the same size as their kitchen, really puts this family’s values into perspective.

One of the girls who lived in the home wholeheartedly shared with us that her favorite place in Mumbai was the Bangaga water tank, which, to my surprise, was right outside her window. This beautiful and holy natural spring is an ancient water tank that is a local pilgrimage site in the Hindu religion.

Still excited about our new Bollywood dance moves, we taught the young girls of the family our new dance moves. Everyone seemed to really connect and enjoy themselves, and the little girls were way better dancers than us. After departing the Bangaga neighborhood, our guide Joshua took us for lunch at Burma Burma, a modern Indian take on traditional Burmese food. Each course was more delicious than the last. I can honestly say this was one of the top 10 meals of my life!

Following lunch, we returned to our hotel to get ready for the wedding. I was especially excited to see what an Indian-Jewish wedding would be like, as I myself had gotten married a little over a year ago. It’s important to note I’ve been a huge fan of Bollywood music even before this trip, to the extent that my wife and l learned a Bhangra dance and surprised all our family and friends during our first dance as a married couple. My dance skills have improved significantly thanks to my new Indian-Jewish friends!

Decked out in our traditional Indian attire, we were off to the synagogue. Unlike in the United States, all Indian-Jewish weddings take place in a synagogue. It was so familiar yet different sitting in the synagogue and hearing the Sheva Brachot (seven wedding prayers). After the ceremony, we traveled to a beautiful reception hall where the festivities were held. It was an evening full of delicious food, dancing and fun!

Throughout the day, I experienced the unassuming hospitality of strangers. This pure willingness to open their home and wedding to us was incredible. India is truly an incredible place with some of the most welcoming people I have ever met.

Chad Brodsky is the founder and CEO of City Brew Tours. City Brew Tours currently operates in eight cities and was recently named one of Inc. Magazine’s 5,000 fastest-growing companies in America. Chad created City Brew Tours in order to marry two of his passions: entrepreneurship and craft beer. Chad studied business administration at the University of Vermont. After a brief finance career in New York City and Vermont, Chad left the world of finance and moved to Boston to focus on growing City Brew Tours, a fledgling start-up at the time. It was in Boston that Chad met his wife, Liana. Chad and Liana live in Newton with their dog, Oliver.