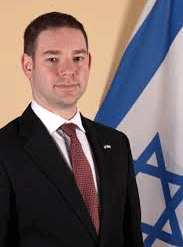 Daniel Agranov brings to the position of Deputy Consul General of Israel to New England more than a decade of experience in Foreign Service. He has been a member of Israel’s Ministry of Foreign Affairs since 2008, previously serving in embassies and consulates in Europe, Asia, and Africa.

In 2011, Daniel moved to St. Petersburg, where he served as Deputy Head of Mission and led a historic effort to open the first Israeli Consulate in Russia.

Agranov was born in Leningrad, USSR, and made Aliya with his family to Israel at the age of eleven. He holds a Bachelor’s degree in Economics and Biology and a Master’s in Business Administration in Finance and Marketing, both from the Hebrew University in Jerusalem. Agranov is married to Nurit, and together they have three daughters and two sons.