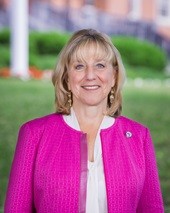 Through hard work, a keen ability to navigate complex issues, and a demonstrated commitment to advocating for her constituents, Senate President Karen E. Spilka has established herself as a respected leader in state government.

Senator Spilka (D-Ashland) represents the Metrowest communities of Ashland, Framingham, Franklin, Holliston, Hopkinton, Medway, and Natick, which comprise the 2nd Middlesex and Norfolk district. As a legislator, Karen Spilka is dedicated to the advancement of progressive social causes and a pragmatic fiscal policy of balancing investments in the state’s education, infrastructure, and economy with saving for the future. She has led on issues such as mental health parity, jobs creation, regional and community equity in education funding, juvenile justice, and services for the elderly and disabled communities. She has worked as a social worker, small business owner, attorney, community activist, and was one of the first legislators in the nation to vote in favor of marriage equality and transgender protections.

As Senate President, Karen Spilka has led on substantive reforms. Her first priority as Senate President was the passage of the Student Opportunity Act, which combined the largest increase in education funding in Massachusetts’ history with reforms to make future education funding more predictable and equitable across communities. In the wake of protests stemming from the murder of George Floyd, Karen Spilka fought for one of the comprehensive and intentional police reform bills in the United States, with the creation of a first-in-the-nation, civilian-led commission with the power to independently investigate and decertify police officers.

Senator Spilka’s tenure as Senate President has also included the legislature’s response to the COVID-19 public health crisis, the most serious pandemic in modern history. As part of this response, the Senate President championed the passage of Patients First legislation, which eliminated barriers to care and surprise medical billing practices while advancing support for community hospitals, testing sites, medical staff, and telehealth services.

Despite a crisis that saw budget-cutting across much of the country, Senate President Spilka’s leadership in establishing one of the largest rainy-day funds in the country empowered Massachusetts to not only avoid new taxes or cuts to social safety nets, but instead actively reinforce support for housing stability, food security, and schools during the pandemic. These were accompanied with an expansion of unemployment benefits and relief for the hospitality and restaurant industries.

Senate President Spilka is a graduate of Northeastern Law School and holds a B.S. in Social Work from Cornell University. She has been married for more than twenty years to Joel S. Loitherstein, an environmental engineer, and has one adult stepdaughter and two adult sons — Heather, Scott, and Jake — and a rescue dog named Lincoln.