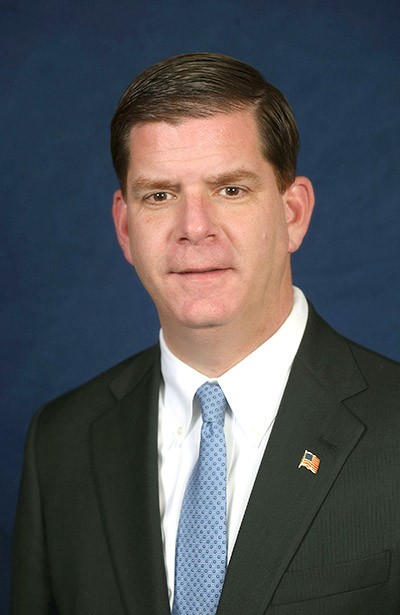 Martin J. Walsh, a lifelong advocate for working people and a proud product of the City of Boston, was sworn in as the City’s 54th mayor on January 6, 2014.

Mayor Walsh’s vision is of a thriving, healthy, and innovative Boston—a city with equality and opportunity for all, where a revolutionary history inspires creative solutions to the world’s hardest challenges. Since taking office he has worked to create good jobs, great schools, safe streets, and affordable homes, while building a more responsive, representative, and transparent city government. He has won national recognition for expanding young people’s opportunities and breaking new ground in community policing. And he has invited the people of Boston to help build a blueprint for the city’s future in Imagine Boston 2030, the first citywide plan in half a century.

Before taking office, Mayor Walsh served in the Massachusetts House of Representatives from 1997 to 2013. Representing Boston’s diverse 13th Suffolk District, he was a leader on job creation and worker protections; substance abuse, mental health, and homelessness; K-12 education; and civil rights. He played a key role defending Massachusetts’ pioneering stand on marriage equality.

Mayor Walsh also made his mark as a labor leader. Beginning in Laborers Local 223 in Boston, he rose to head the Building and Construction Trades Council of the Metropolitan District from 2011 to 2013. There he worked with business and community leaders to promote high quality development and career opportunities for women and people of color.

Born and raised in the neighborhood of Dorchester by immigrant parents, Mayor Walsh is driven to make sure Boston is a city where anyone can overcome their challenges and fulfill their dreams. At age seven, Mayor Walsh survived a serious bout of Burkett’s lymphoma thanks to the extraordinary care he received at Boston Children’s Hospital and Dana Farber Cancer Institute. His recovery from alcoholism as a young adult led to his lifelong commitment to the prevention and treatment of addiction. And while working full-time as a legislator, he returned to school to earn a degree in Political Science at Boston College.