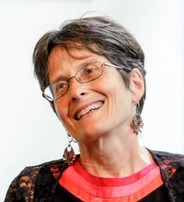 Rabbi Sharon Cohen Anisfeld became President of Hebrew College in July 2018. Rabbi Anisfeld graduated from the Reconstructionist Rabbinical College in 1990, and subsequently spent 15 years working in pluralistic settings as a Hillel rabbi at Tufts, Yale, and Harvard universities. She has been a regular summer faculty member for the Bronfman Youth Fellowships in Israel since 1993 and is co-editor of two volumes of women’s writings on Passover.

From 2011 to 2013, she was named to Newsweek’s list of Top 50 Influential Rabbis in America. In 2015, Rabbi Anisfeld was named one of the 50 most influential Jews in the world by The Jerusalem Post. She writes and teaches widely, weaving together Torah, rabbinic commentary, and contemporary poetry and literature in her wise and compassionate approach to the complexities of the human experience and the search for healing and hope in a beautiful but fractured world.