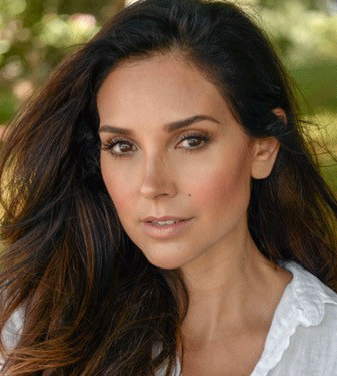 Reyna Simnegar was born in Caracas, Venezuela. Her family history dates back to the Spanish Inquisition when her family fled from Spain, changed their last name, and lived as hidden Jews for centuries. Reyna grew up Catholic but inspired by her family heritage, converted to Judaism.

In her teenage years, Reyna ventured into the world of modeling, advertising, and beauty pageants. She was featured in several television ads, especially toothpaste ads! She also modeled for several catalogs, including La Perla. She enrolled in the Miss Venezuela beauty pageant though was later disqualified for being three inches too short. She enrolled in Venezuela’s Universidad Metropolitana to pursue a degree in chemical engineering.

Tired of being the only girl in class and having to bat her lashes to get good grades, Reyna moved to the United States in 1995 to pursue two dreams: becoming an interior designer and a Jew. She enrolled at UCLA and got a job in Taco Bell, where she met an unsatisfied customer who later became her life partner.

When Sammy, her future husband, moved to New York City to attend graduate school, Reyna moved there to be closer to him. Sammy’s mother, who was afraid Sammy would starve in New York without authentic Persian food, hosted Reyna for a week and taught her the intimate secrets of Persian cuisine. This was a super investment for Sammy’s mom, because it obviated the need to FedEx frozen Persian food to New York!

In New York, Reyna pursued a career in advertising, studying at the Fashion Institute of Technology. She lived across the street from the restaurant made famous on Seinfeld, and practiced her Persian recipes for friends with great success.

Reyna started her personal quest toward becoming a religious Jew at 12 years old, after discovering her family were Anusim (Marranos, or Crypto Jews). However, it was not until she lived in New York that she was finally able to realize her dream of living the spiritual life. At the same time, Sammy (obviously inspired by... ahem... Reyna), started a personal spiritual quest of his own. Just like in a Hollywood movie — only this time it happened in Manhattan — they both became religious Jews, walking different paths but dancing to the same tune and toward the same goal: Truth. Against all odds and in spite of the tribulations of being from two completely different cultures, they married according to the laws of the Torah, and managed to stay alive to tell you about it!

Reyna is the author of Persian Food from the Non-Persian Bride (Feldheim, 2011). Her recipes are lavish, rich, and enticing. The details in this cookbook make it magnificent, with divine photography and Persian calligraphy gracing the pages, along with Reyna's personal anecdotes about integrating into a Persian family. Whether you hail from Iran, Indiana, Israel, or anywhere around the globe, this cookbook is a must! She has made several TV appearances nationwide, including on ABC and NBC. She also has her own YouTube channel and a blog.

Reyna’s hobbies include preparing and cooking for Shabbat and entertaining guests. She also looks forward to performing makeovers on her friends, decorating their homes without charge, and teaching cooking and inspirational classes for women through Aish Boston and Chabad.

She is very happily married and lives in Brookline with her wonderful husband and five lively boys. And by the way, she did earn her bachelor's degree in international management and economics — with honors — from the University of Massachusetts.