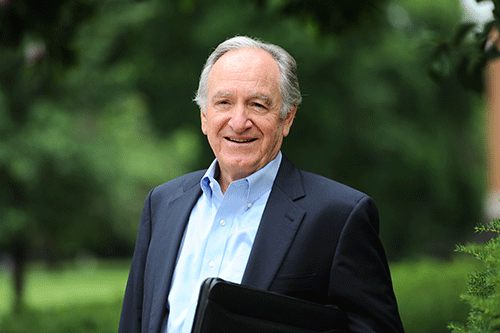 In 1974, Tom Harkin was elected to Congress from Iowa's Fifth Congressional District. His energetic, person-to-person campaign carried the day against an incumbent in a long-standing Republican district. In 1984, after serving 10 years in the U.S. House of Representatives, Senator Harkin challenged an incumbent senator and won. Iowans returned him to the Senate in 1990, 1996, and again in 2002.

In November 2008, Senator Harkin made history by becoming the first Iowa Democrat to win a fifth term in the U.S. Senate. He retired from the United States Senate in January 2015.

As a young senator, Tom was tapped by Senator Ted Kennedy to craft legislation to protect the civil rights of millions of Americans with physical and mental disabilities. He knew firsthand about the challenges facing people with disabilities from his late brother, Frank, who was deaf from an early age. What emerged from that process would later become his signature legislative achievement — The Americans with Disabilities Act (ADA).

The ADA has become known as the "Emancipation Proclamation for people with disabilities." The legislation changed the landscape of America by requiring buildings and transportation to be wheelchair accessible, and to provide workplace accommodations for people with disabilities. To preserve the intent of the ADA after several court rulings weakened its standards, Senator Harkin and Senator Orrin Hatch (R-UT) introduced the ADA Amendments bill to ensure continuing protections from discrimination for all Americans with disabilities. It was signed into law in September 2008. In September 2009, Senator Harkin became chairman of the Senate Health, Education, Labor and Pensions (HELP) Committee.